One of the teens featured in the recent Kia Boys YouTube documentary faces charges. Investigators say 17-year-old Markell Hughes was the driver of a red Kia captured in the video.

MILWAUKEE - Criminal charges have been filed against 17-year-old Markell Hughes – identified by authorities as one of the individuals featured in a YouTube video regarding a group of car thieves that engage in reckless driving.

The video shows an incident that occurred near 36th and Courtland Avenue on May 17.

Hughes was charged with the following criminal counts:

According to the criminal complaint, on the morning of May 17, an officer responded to the Hawthorn Suites in Oak Creek in response to a call about a stolen vehicle. The officer spoke with the person who reported the crime. That person had rented a red 2021 Hyundai Elantra with a key-start ignition and Pennsylvania license plate. The person told the officer the car had been stolen "at some point between 6:30 p.m. the night of May 16, 2022, and the morning of May 17, 2022," the complaint says. There was broken glass where the car had been parked.

Later on May 17, another person reported a stolen 2021 Kia Seltos stolen from the area of 115th and Burleigh in Wauwatosa.

The complaint indicates on May 31, a video was uploaded to YouTube titled, "Kia Boys Documentary (A Story of Teenage Car Theft)." In that video, a red Hyundai Elantra is seen being driven recklessly near 36th and Courtland Avenue. The license plate on the Hyundai matched that of the stolen car in Oak Creek. 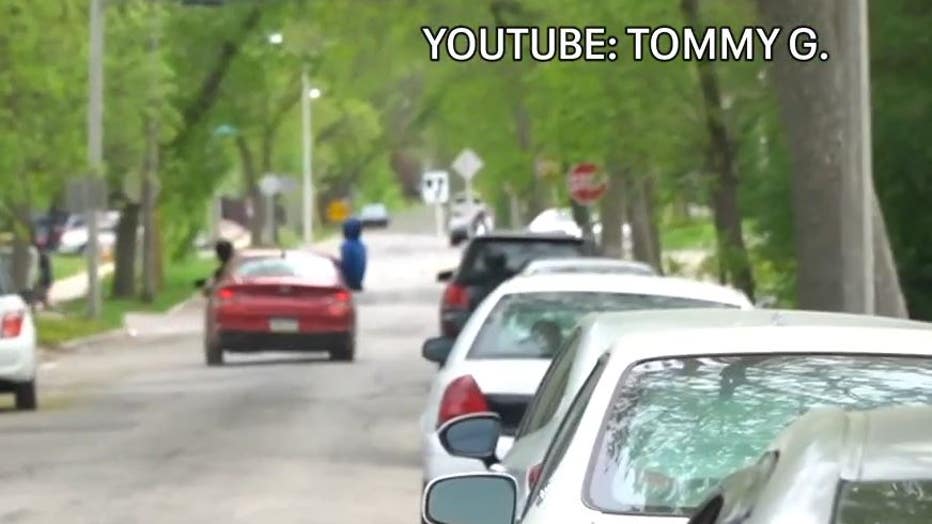 Still on May 17, police received a call from an unknown caller reporting a "Hyundai driving recklessly at high rates of speed." The complaint says the called informed police the subjects with the car were changing a tire behind the Walgreens near 68th and Hampton.

Roughly six minutes later, police received a call about a crash involving a school bus and a Kia Seltos. Video of the crash shows a man arrive at the scene in a red Hyundai Elantra "wearing a black hooded sweatshirt with the word 'Glock' written on it in white lettering. This sweatshirt matches the depiction of the sweatshirt of the front passenger in the YouTube video," the complaint says. Again, the Hyundai in this video had the same Pennsylvania license plate.

The Kia Seltos was processed by law enforcement -- and several fingerprints were recovered. One of those matched "the left thumb of the defendant, Markell S. Hughes," the complaint says.

On June 8, a detective reviewed jail calls placed by the defendant on June 6. The complaint says in those calls, "the defendant states 'I heard my video went viral too. I heard my (expletive) hit 50K in one day.'" Officials said the video had close to 500,000 views after two weeks.

On June 10, Hughes was interviewed by detectives. Hughes "admitted to being the driver of the car" in the 36th and Courtland incident, saying "he was going too fast." Hughes said "he does not steal cars, but he agreed with (the detective) when the detective said, 'You just drive them.'"

The complaint adds that the defendant's fingerprints have been identified in "six other stolen cars.

A news release says the Milwaukee Police Department appreciates all the information we have received from
the community regarding this investigation. We are proud of all the hard work of our members that have been diligently working on identifying the individuals involved in criminal activity in the video.

Officials continue to ask the community to come forward and provide any information regarding the individuals involved in criminal activity or reckless behavior. Anyone with any information is asked to contact Milwaukee police at 414-935-7360, or to remain anonymous, contact Crime Stoppers at 414-224-TIPS or P3 Tips App.