WASHINGTON - Federal judge Ketanji Brown Jackson faced down a barrage of Republican questioning Wednesday about her sentencing of criminal defendants, as her history-making bid to join the Supreme Court veered from lofty constitutional questions to attacks on her motivations on the bench.

In her final day of Senate questioning, she declared she would rule "without any agendas" as the high court's first Black female justice and rejected Republican efforts to paint her as soft on crime in her decade on the federal bench. On Thursday, the final of four days of hearings, legal experts on both sides will weigh in.

Though her approval seems all but sure — Democrats are aiming for a vote before Easter — Republicans kept trying to chip away at her record on Wednesday.

But the GOP criticism was punctuated with effusive praise from Democrats, and by reflections on the historic nature of her nomination — none more riveting in the room than from New Jersey Sen. Cory Booker, who used his time not to ask questions but to tearfully speak and draw tears from Jackson as well. 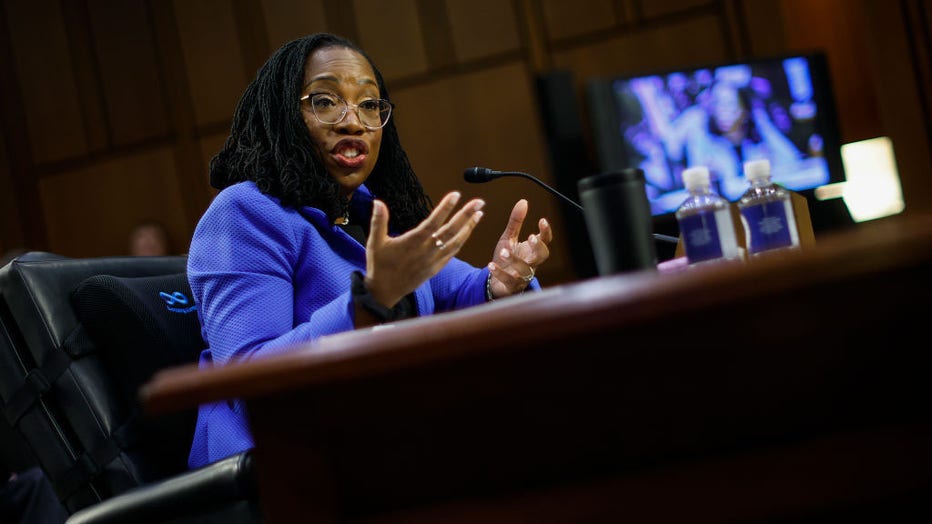 Booker, who is Black, said that he sees "my ancestors and yours" when he looks at her. "I know what it’s taken for you to sit here in this seat," he said. "You have earned this spot."

Jackson was silent as Booker talked, but tears rolled down her face, her family sitting behind her.

The judge was in tears a second time after similar praise from Sen. Alex Padilla, and responded to the California Democrat that she hopes to be an inspiration because "I love this country, because I love the law."

During more than 22 hours of hearings over two days, GOP senators aggressively questioned her on the sentences she has handed down to child pornography offenders in her nine years as a federal judge, her legal advocacy on behalf of terror suspects at Guantanamo Bay, her thoughts on critical race theory and even her religious views.

In response to questioning about a case over affirmative action at Harvard University, her alma mater where she now serves on the Board of Overseers, Jackson said she would recuse herself. "That's my plan," she responded when Texas Sen. Ted Cruz asked her about it.

In the fall, the court will take up challenges to the consideration of race in college admissions, in lawsuits filed by Asian American applicants to Harvard, a private institution, and the University of North Carolina, a state school. The court currently plans to hear the suits against the two schools together but could separate them and give Jackson a chance to take part in what will be one of next term’s biggest issues.

Republicans spent much of Wednesday focused on her sentencing, particularly on the child pornography cases, as they had on Tuesday. Tempers rose as the day wore on, with Senate Judiciary Committee Chairman Dick Durbin slamming down his gavel at one point when Cruz refused to yield after his time expired while he was grilling Jackson.

"You can bang it as long as you want," Cruz snapped, shouting that he just wanted Jackson to answer his question.

"At some point you have to follow the rules," Durbin shot back.

In another round of tense questioning, South Carolina Sen. Lindsey Graham interrogated Jackson on the punishment she believes appropriate for people convicted of child pornography. Like Cruz and others on the committee, Graham said she had been too lenient on those criminals. Graham frequently interrupted her as she answered; at one point he said judges should simply "put their a— in jail!"

The focus on sentencing was part of a larger effort by the committee's Republicans — several of whom are potential presidential candidates — to characterize Jackson's record, and her judicial philosophy, as too empathetic and soft on criminals who commit the worst offenses. It was also reflective of an emerging emphasis on crime in GOP midterm election campaigns.

North Carolina Sen. Thom Tillis told Jackson she seemed like "a very kind person" — but "there’s at least a level of empathy that enters into your treatment of a defendant that some could view as maybe beyond what some of us would be comfortable with, with respect to administering justice."

The sustained focus on her record suggested that, contrary to Democratic hopes, Jackson’s confirmation vote in the full Senate is unlikely to garner much, if any, Republican support. Still, several Republicans acknowledged that she is likely to be on the court. Democrats can confirm her without any bipartisan support in the 50-50 Senate as Vice President Kamala Harris can cast the tiebreaking vote.

Jackson, backed by committee Democrats, said the Republicans were mischaracterizing her decisions. Asked if her rulings were endangering children, she told the committee on Tuesday: "Nothing could be further from the truth."

She said she bases sentences on many factors, not just federal guidelines. Sentencing is not a "numbers game," she said, noting that there are no mandatory sentences for sex offenders and that there has been significant debate on the subject.

Some of the cases have given her nightmares, she said, and were "among the worst that I have seen."

Jackson said that if she is confirmed, she will do what she has done as a federal judge, "which is to rule from a position of neutrality, to look carefully at the facts and the circumstances of every case without any agendas, without any attempt to push the law in one direction or the other."

She reminded the committee that her brother and two uncles served as police officers, and that "crime and the effect on the community, and the need for law enforcement — those are not abstract concepts or political slogans to me."

President Joe Biden chose Jackson in February, fulfilling a campaign pledge to nominate a Black woman to the Supreme Court. She would take the seat of Justice Stephen Breyer, who announced in January that he would retire this summer after 28 years.

Jackson would be the third Black justice, after Thurgood Marshall and Clarence Thomas, and the sixth woman. Her confirmation would maintain the current 6-3 conservative majority on the court. She would also be the first former public defender on the court, and the first justice with experience representing indigent criminal defendants since Marshall.

Some of the most combative rounds of questioning during the hearings came from the potential GOP presidential candidates, including Cruz, Missouri Sen. Josh Hawley and Arkansas Sen. Tom Cotton. All hit on issues that are popular with the GOP base, including attacks on critical race theory, the idea that racism is systemic in the nation’s institutions. Jackson said the idea doesn't come up in her work as a judge, and it "wouldn’t be something I would rely on" if confirmed.

Asked about abortion, Jackson readily agreed with comments that conservative Justices Amy Coney Barrett and Brett Kavanaugh made about two landmark cases when they were up for confirmation. "Roe and Casey are the settled law of the Supreme Court concerning the right to terminate a woman’s pregnancy. They have established a framework that the court has reaffirmed," Jackson said.

The Constitution directs the president to appoint judges to the Supreme Court. Here's how that unfolds.

Even now, the court is weighing whether to overrule those cases that affirm a nationwide right to abortion.

Near the end of Tuesday's long hearing, Sen. John Kennedy, R-La., asked Jackson when life begins. She told him that she didn’t know, and added, without elaborating, "I have a religious view that I set aside when I am ruling on cases."

After Wednesday's session, Democrats criticized the Republicans' questioning and praised the way Jackson handled it.

"For some who are opposing her, it’s a bitter pill to accept this kind of change in America," Durbin told reporters.