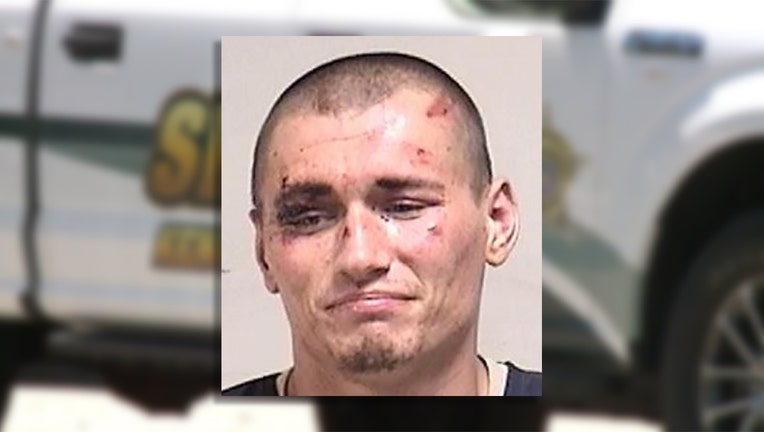 KENOSHA, Wis. - A 25-year-old Kenosha man has been charged with multiple counts related to a hit-and-run crash on July 27.

Prosecutors say Bailey Davis was "aggressive," "erratic" and resisted arrest during the incident – and at one point kicked a deputy in the mouth.

According to a criminal complaint, a witness said a man pulled out of a parking lot in from of the van, causing the accident. Deputies spoke to the van's two occupants, both of whom reported pain and were taken to the hospital.

A man who was "covered in blood from his head down to his chest" approached deputies at the scene, the complaint states. The man was later identified as Davis who, when asked if he was involved, allegedly said, "Yes, but it's not my problem because of the police."

The complaint states Davis was agitated and said he was not going to be handcuffed. Deputies said he appeared to be under the influence because of his "erratic behavior and his irrational statements." At the scene, deputies later recovered a nearly empty bottle of liquor on the floor of Davis' car.

Officials said Davis began to run away at one point, too, reaching a wooded area as deputies commanded him to stop and tried to cut off his routes. Davis reached a fence, but deputies stopped him from getting over it; at one point, Davis was hanging upside down. During deputies' attempts to remove Davis near the fence, the complaint states, he repeatedly tried to kick the deputies and break free, yelled incoherently and began aggressively grabbing the deputies.

Multiple law enforcement officers tried to remove Davis, who was holding onto the fence. After the situation escalated, the complaint states, a taser was deployed in an attempt to get Davis to let go and into handcuffs. While being placed in handcuffs, the complaint states Davis continued to resist; deputies' arms became scratched and cut during the struggle.

The complaint states Davis' aggression was so intense that a sedative was administered to allow assessment of his injuries. He was later taken to the hospital where he "suddenly became highly aggressive and was screaming as loud as he could." Davis tried to pull stitches out of his chest and face, and the complaint states he tried to kick deputies who tried to stop him. One deputy was kicked in the mouth.

One of the crash victims said at the hospital that they approached the striking vehicle along with several other witnesses at the scene. The driver, since determined to be Davis, was the only occupant. The victim said, according to the complaint, that Davis climbed out of a window and was acting erratically, saying things like "I don't want to go to jail." The driver was "bloody and out of control" – at one point climbing onto the car's roof, according to the victim.

Davis is charged with the following counts:

Davis had a preliminary hearing in the case on Aug. 5. His next court appearance is slated for Sept. 9.

A 41-year-old man was arrested in Muskego after a tactical situation on Friday, Aug. 6. The incident lasted just over two hours.