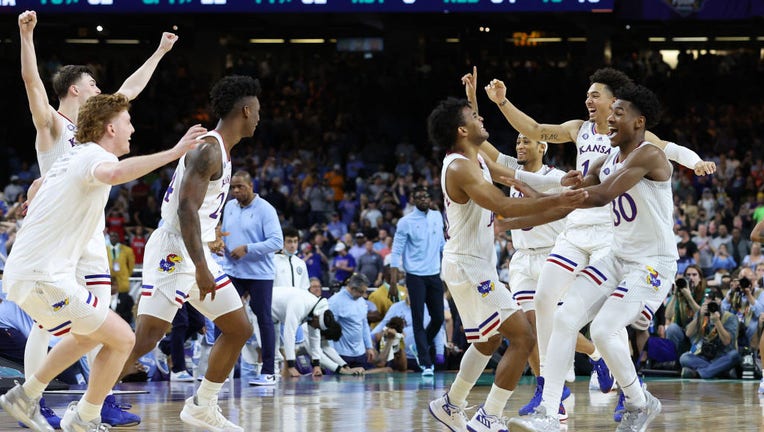 What looked like a lost cause turned into one of the sweetest wins ever for Kansas.

The Jayhawks brought their fourth NCAA title back to Allen Fieldhouse on Monday thanks to a second-half flurry that erased a 16-point deficit and eventually overcame North Carolina 72-69 in an epic battle of power programs.

It was the largest comeback in national championship history, surpassing the 1963 title game when Loyola overcame a 15-point deficit to beat Cincinnati at the buzzer, 60-58.

"We just locked in as a family, as a team, and that’s what we do," said Kansas big man David McCormack, after making last two baskets of the game. "We overcome the odds. We overcome adversity. We’re just built for this."

McCormack scored the go-ahead bucket from close range with 1:21 left, then another at the 22-second mark to put the Jayhawks ahead by three.

North Carolina missed its final four shots, including Caleb Love’s desperation 3 at the buzzer. His heave came up short after officials ruled that Kansas guard DaJuan Harris Jr., stepped out on an inbounds pass with 4.3 seconds left.

"They were penetrating and doing whatever they wanted," Love said.

A history of the term March Madness in basketball

The term March Madness got its origins in Illinois surrounding the annual tournament of high school boys basketball teams, according to the Illinois High School Association -- which sponsored the event.

After McCormick’s go-ahead bucket, Love drove to the basket but his shot got blocked. North Carolina grabbed an offensive rebound and got the ball to Armando Bacot under the bucket. But he lost his footing and turned it over, then limped off the court, unable to return.

"I thought I really got the angle that I wanted and then I just rolled my ankle," Bacot said.

That put Brady Manek, not as good a defender, on McCormack, and the Kansas big man backed in Manek for the shot that put the Jayhawks ahead by three.

"When we had to have a basket, we went to Big Dave, and he delivered," said Kansas coach Bill Self, who has two of the program's four championships.

McCormack and Jalen Wilson led KU with 15 points each. Christian Braun scored 10 of his 12 in the second half and transfer Remy Martin had 11 of his 14 over the final 20 minutes. The Jayhawks outscored Carolina 47-29 in the second half.

"When we saw our own blood, we didn’t panic and we came out the second half coming in hot," Self said. "I was thinking at the 14-minute mark, ‘There’s no way these guys can play for 20 minutes defense like this,' but they did."

But it was Kansas that couldn't buy a basket late in the first half, as Carolina ran over and around the Jayhawks during a 16-0 run. The Tar Heels led 40-25 at the break. Then, top-seeded KU (34-6) started trapping and pressing more, moving the ball around on offense, and Carolina started getting a taste of what everyone else has this season: You can't stop 'em all.

The Jayhawks went on a 31-10 run to take a six-point lead at the 10-minute mark and set up a fantastic finish.

Basketball fans descended on Caesars Superdome in New Orleans on April 2, for the Final Four of the NCAA tournament. (Credit Ari Russell via Storyful)

Bacot had 15 points and 15 rebounds to become the first player to record double-doubles in all six tournament games. He finished the season with 31 double-doubles, but it was not enough. Carolina was trying to join 1985 Villanova as only the second 8 seed to win March Madness.

Instead, the Tar Heels (29-10) fell one win short and dropped to 6-6 all-time in title games. This was their record 21st — and possibly most unlikely — trip to the Final Four. They made it to the final by beating Duke in a back-and-forth thriller and sending Blue Devils coach Mike Krzyzewski into retirement.

"I can’t remember a time in my life where I should be disappointed," said rookie UNC coach Hubert Davis, who was trying to become the first person to lead a team to a title in his first full year as head coach. "But I am filled with so much pride."

A great season — but the banner will hang in Lawrence.

And McCormack, thanks to his late-game heroics, will go down in KU lore, along with Mario Chalmers (2008), Danny Manning (and the miracles in 1988) and the rest of the Kansas greats.

This title was three years in the making. KU was 28-3 and the odds-on favorite heading into March of 2020. Then, the COVID-19 pandemic hit and stopped both the Jayhawks, and the season, in their tracks.

Seven players from that roster are on this one, as well. In some of their minds there were no "what-might-have-beens" about 2020 -- they knew they would have won it. They won this one instead, and showed, once again, it’s never good to count them out.

While this wasn't quite the 47-15 beatdown they put on Miami over the final 20 minutes in the Elite Eight, it was still darn impressive given the circumstances.

Ochai Agbaji, who was named the Final Four's most outstanding player, finished with 12 points and found breathing room after UNC’s lockdown guard, Leaky Black, got his fourth foul 6 minutes into the second half.

"This is a special group of guys," Agbaji said. "We’re going down in history. All I got to say is, ‘Rock Chalk, baby.’"