An 18-year-old Zion, Illinois man is accused of&nbsp;driving recklessly on I-94, leading deputies on a high-speed pursuit on and off the interstate before he was apprehended by a K-9 unit.

RACINE COUNTY, Wis. - An 18-year-old Zion, Illinois man is accused of driving recklessly on I-94, leading deputies on a high-speed pursuit on and off the interstate before he was apprehended by a K-9 unit.

The Racine County Sheriff's Office identified him as Kamryn Harris. He is expected to be charged with fleeing and eluding an officer, carrying a concealed weapon, second-degree recklessly endangering safety, possession of THC with the intent to deliver and possession of drug paraphernalia.

Just before 7 p.m. on Monday, March 1, a supervisor with the Racine County Sheriff’s Office was patrolling southbound on I-94 just south of Highway K in a marked squad when he was passed by a vehicle at a high rate of speed. The car’s speed was captured on radar at 125 miles per hour in the posted 70 mph zone.

The supervisor attempted to stop the speeding vehicle, but the vehicle increased its speed and started weaving through traffic to elude the pursuing squad. The supervisor then made the decision to terminate his pursuit.

The driver then turned off all the vehicle lights and continued to drive in a reckless manner.

The fleeing vehicle was seen exiting I-94 at Highway 11 -- and went west. A short time later, a Racine County K-9 unit spotted the vehicle traveling eastbound on 58th Road. The vehicle was still speeding and blowing through stop signs with the vehicle lights off, officials say.

The Racine County Sheriff's Office released this body camera video of a pursuit suspect being taken into custody.

The Racine County Sheriff's Office shared this body camera video of a pursuit suspect being taken into custody.

Sheriff's officials said the driver then fled from the car towards a nearby building. The K-9 deputy exited his squad and released his K-9 partner Friday. Friday was able to locate and apprehend the suspect by his arm. The suspect then began to fight with Friday, trying to escape from him. Friday stayed on the suspect until his K-9 handler arrived -- and the suspect was taken into custody.

"He could've certainly gave up," said Racine County Sheriff Christopher Schmaling. "He could've put his hands on his head. He didn't. He ran, and when the K-9 came out, he decided to fight with the K-9. As you can imagine, he lost that battle."

Sheriff Schmaling said he feels the incident is indicative of a nationwide disrespect toward law enforcement while crediting his deputies for managing the pursuit safely.

"Can you imagine getting struck, a T-bone accident at 125 miles an hour?" said Sheriff Schmaling. "I would submit to you we'd be reporting on a much different story tonight." 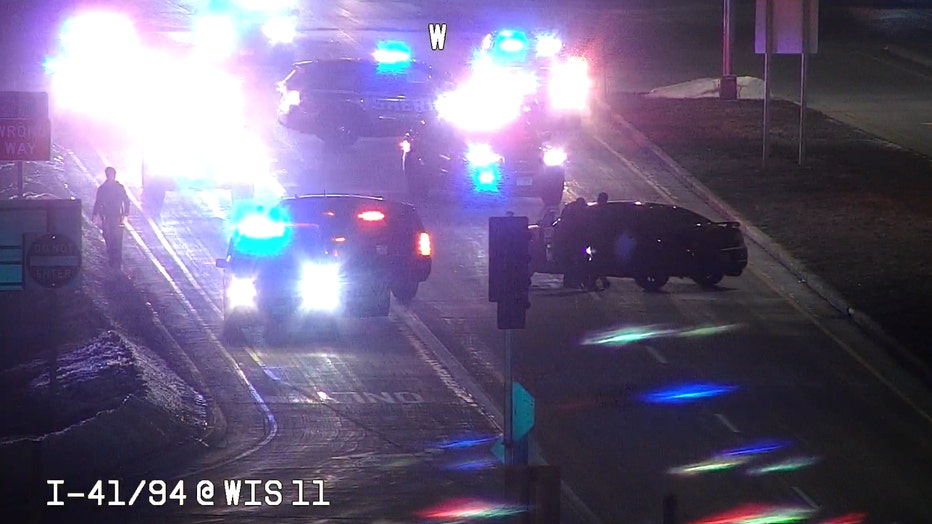 Authorities searched the suspect's vehicle and found a handgun as well as marijuana and drug packaging material.

Officials say Harris was taken to the hospital for injuries sustained while fighting with the police canine. He is now at the Racine County Jail.