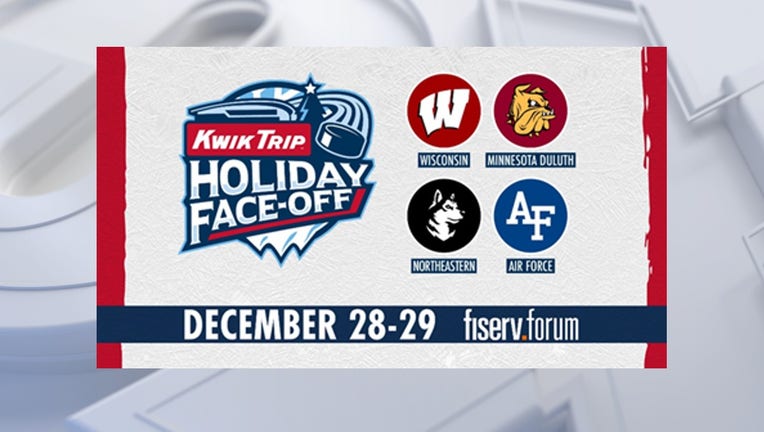 In the 2022 Kwik Trip Holiday Face-Off last week, Clarkson scored six unanswered goals in downing No. 15 UMass, 6-3, in the semifinals and then captured the title with a 3-1 win over Wisconsin.

According to a press release, Wisconsin won the inaugural event in 2021 and advanced to the title game of the 2022 tournament last week. Head coach Tony Granato is in his seventh season at his alma mater and is a member of the U.S. Hockey Hall of Fame and a two-time Big Ten Coach of the Year honoree. The Badgers have a hockey history of 26 NCAA Tournament appearances and six National Championships.

Northeastern is under the direction of second-year head coach Jerry Keefe, who is the reigning Hockey East Coach of the Year for guiding the Huskies to a 25-13-1 mark, including 15-9-1 in league play in earning the program’s first-ever regular season title. Northeastern has been to the NCAA Tournament eight times.

In 26 years with Air Force, Frank Serratore has led the Falcons to 432 wins, one of seven active coaches (along with Scott Sandelin) with over 400 career wins. He has also guided the Falcons to seven conference championships and seven NCAA Tournament appearances – the only NCAA trips in Academy history.

Tickets for the 2023 Kwik Trip Holiday Face-Off, as well as the schedule, will be announced at a later date at fiservforum.com.