You decided a bitter election and now, those people you elected started their terms. Wisconsin Gov. Tony Evers on Tuesday, Jan. 3 laid out his vision for his second term.

MADISON, Wis. - You decided a bitter election and now, those people you elected started their terms. Wisconsin Gov. Tony Evers on Tuesday, Jan. 3 laid out his vision for his second term. He plans to take stands on issued like abortion and marijuana, but he will meet even larger Republican opposition.

"I’m Tony Evers, and, yes, I am jazzed as hell to be sworn in again as the 46th governor of the great state of Wisconsin," Evers said after being sworn in for a second four-year term.

Evers on Tuesday renewed his push for legal abortions by undoing a 174-year-old state ban that took effect when the U.S. Supreme Court overturned Roe v. Wade. The Republican-controlled Legislature last year twice rejected attempts by Evers to undo the law. Evers has promised to veto any bill that creates exceptions under the law for rape and incest, saying he will only support a full overturning of the abortion ban.

Governor Tony Evers celebrated the start of his second term Tuesday night with an Inauguration Gala in Madison.

"We must restore the freedoms that Wisconsinites have had until June 23, 2022, the day before the U.S. Supreme Court overrode Roe v. Wade," Evers said. "And I believe that together we will."

The governor also made his pitch for legalizing marijuana.

"Yes, we must have a meaningful conversation about treating marijuana much like we do alcohol. But we can’t do it alone—together we will," Evers said.

Evers said he wants to expand the state’s Medicaid program known as BadgerCare Plus as well as affordable housing, job training, and apprenticeships. He said he wants everyone to be able to connect to affordable internet. The governor also called for bringing more workers into the state, making childcare more accessible and affordable. He also asked for better investments in local communities.

"We need generational, transformative improvements as to how we invest in our local communities and keep them safe—and to ensure they can respond to basic and unique needs alike. So, let’s keep working together on a plan. Because while one person alone cannot right the disinvestment local communities have seen over the last decade, together we will," Evers said.

That said, the governor will face a larger Republican majority in both the state Senate and Assembly. 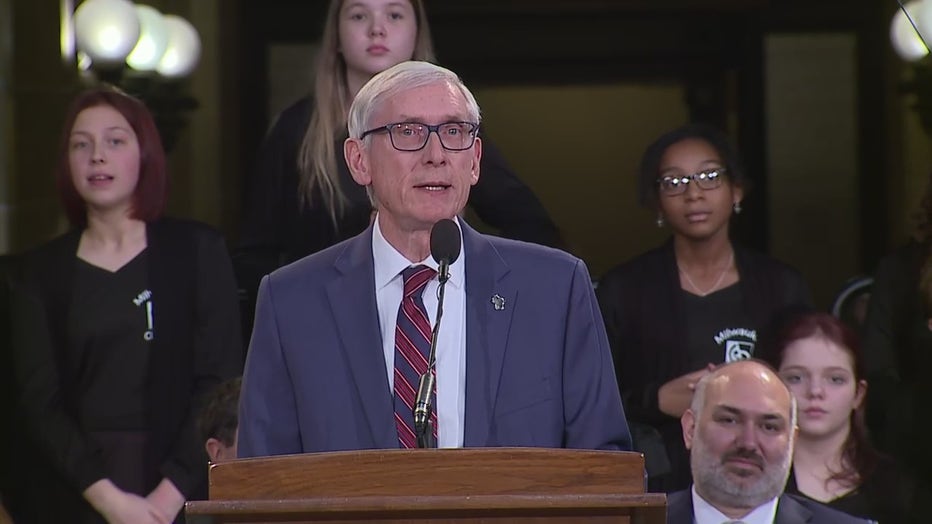 Evers' speech was a warm-up of sorts for Evers, who will deliver his State of the State address in three weeks. And in February, Evers will release his two-year state budget plan, which will include details about the state's projected $6.6 billion surplus.

Evers didn't mention the surplus Tuesday, instead highlighting key priorities such as cutting taxes for the middle class and not just wealthy residents. Evers opposes a Republican plan to move toward a flat income tax rate, which would lower taxes more dramatically for those at the highest tax rate.

Evers also called for for "generational, transformative improvements as to how we invest in our local communities and keep them safe." He has called for increased funding to local governments, while Republican legislative leaders are discussing a plan that would give counties, cities, towns and villages a portion of the state sales tax revenue.

Evers planned to meet Wednesday with mayors from the state's largest cities to discuss options.

The Waukesha South High School Marching Band performed, just over a year after some of its members were hurt when a man drove his SUV through the city’s Christmas parade, killing six.