Recount in Georgia ‘means nothing’ because of ballot signatures, Trump team says

Recount in Georgia 'means nothing' because of ballot signatures, Trump team says

ATLANTA - The legal challenges by President Donald Trump and his allies seeking to contest the results of the 2020 election and overturn a win by President-elect Joe Biden have heated up. Trump's personal attorney Rudy Giuliani, during a press conference on Thursday, promised a lawsuit would be filed in Georgia outlining multiple issues during the election in Atlanta.

While lawyers for the president have focused mostly on Michigan, Arizona, and Pennsylvania, they turned their eyes towards Georgia on Thursday where Biden appears to have won by just under 13,000 votes. The win in Georgia pushed Biden to a projected win of 306 electoral votes, 36 more than is needed to clinch a White House win.

Giuliani and others have alleged a widespread Democratic election conspiracy involving multiple states and suspect voting machines. But election officials across the country have said repeatedly there was no widespread fraud. Many of the allegations of fraud stem from poll watchers who filed affidavits included with lawsuits in battleground states aimed at delaying vote certification, such as a suit filed by Atlanta-area attorney Lin Wood on Thursday. 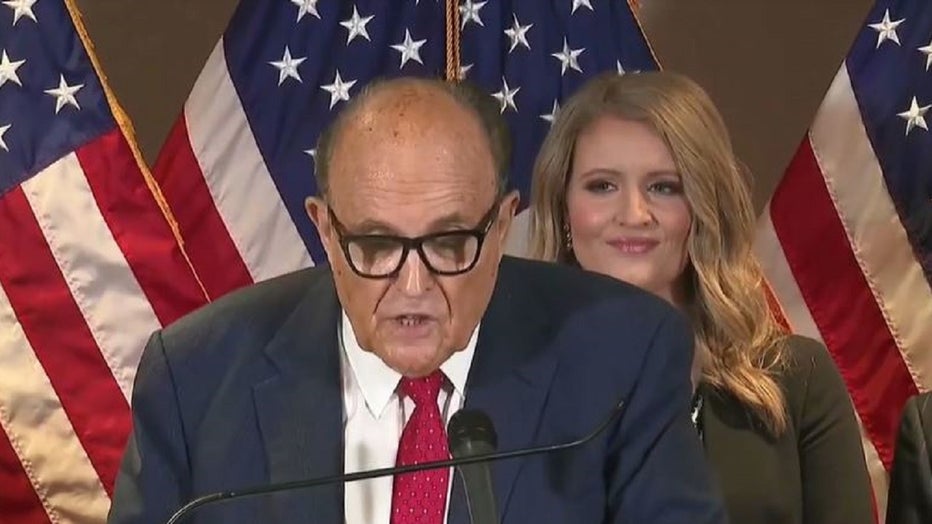 “Georgia, we’re about to file a major lawsuit in Georgia. That will be filed probably by tomorrow,” Giuliani said, claiming the lawsuit was to help expose a massive nationwide election fraud conspiracy. “In the city of Atlanta, Republicans were not allowed to watch the absentee mail-in ballot process. Inspections completely cast aside. We have numerous double voters. We have numerous out-of-state voters. And we have specific evidence of intimidation and changes of votes.”

Giuliani promised that lawsuit would be filed Friday. He cited a few sworn affidavits that he said showed a vast Democratic conspiracy but added that he could not reveal much of the evidence. He also said revealing some of these witnesses would open them up to attack.

During the hand tally in Georgia, several counties found previously uncounted ballots that the secretary of state’s office has said would reduce Biden’s lead by a couple of thousand votes. Georgia law allows a candidate to request a recount within two business days of certification if the margin is less than 0.5 percentage points. That recount would be done using machines.

A federal judge has dismissed a lawsuit seeking to halt the certification of Georgia's election.

The secretary of state’s office planned to release the results of the audit on Thursday.

Giuliani also laid out his case against mail-in ballots arguing there is no way to reconcile the validity of the ballot once the outer envelope containing the signature is thrown away.

“For example, the recount being done in Georgia will tell us nothing because these fraudulent ballots will just be counted again because they wouldn’t provide the signatures to match the ballots. So, it means nothing,” Giuliani said. Giuliani’s comment echoes statements previously made by Trump who has repeatedly attacked the process and called it “a joke.”

The Georgia Secretary of State’s Office previously reported a little more than 2,000 absentee ballots were rejected for missing or non-matching signatures out of the 1.3 million casts.

Trump’s own election security agency has declared the 2020 presidential election to have been the most secure in history. Days after that statement was issued, Trump fired the agency’s leader.

Chris Krebs, the Trump administration election official fired last week over the comments about the security of 2020, tweeted: “That press conference was the most dangerous 1hr 45 minutes of television in American history. And possibly the craziest.”

About thirty lawsuits filed by the Trump campaign have been dismissed as of Thursday afternoon.