A new Fox News survey of Wisconsin registered voters finds Johnson preferred over his Democratic challenger by 4 points: 44% Barnes vs. 48% Johnson. Last month, it was Barnes who was up by 4 (50-46%). 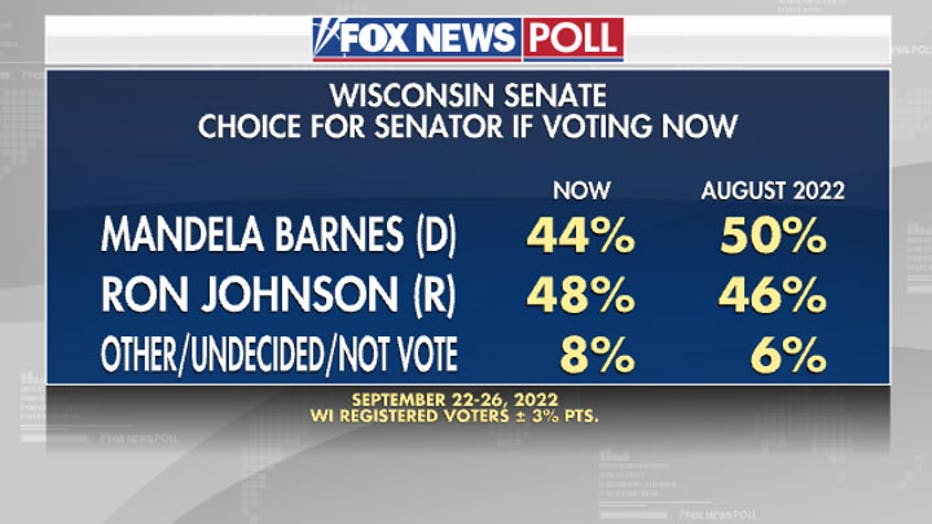 Some 87% in the Badger state say they feel certain they’ll cast a ballot this year, and among only these voters Barnes trails Johnson by 5 points (45-50%).

Whether looking at the race among all registered voters or only "certain" voters, it’s within the survey’s margin of sampling error.

"Wisconsin continues to be one of the most closely divided states in the country," says Democratic pollster Chris Anderson, whose company Beacon Research conducts the Fox News survey with Republican pollster Daron Shaw. "Republicans appear to have some momentum in both the Senate and gubernatorial races, but they are both competitive as we head into the final month of campaigning."

Johnson won re-election in 2016 by about 3 points.

Much of the shift away from Barnes is among men, including a 7-point decline among Democratic men. That contributes to the wide gender gap, as women prefer Barnes by 11 points, while men back Johnson by 21.

Johnson also gets support from White evangelical Christians (+57), rural voters (+13), and voters without a college degree (+12). Barnes is the choice among city dwellers (+31), union households (+8), and college educated voters (+8).

Most Democrats back Barnes (94%), most Republicans back Johnson (92%), while independents split. Johnson benefits from the fact that more voters in Wisconsin identify as Republicans than Democrats, and that’s what gives him the advantage in this race. 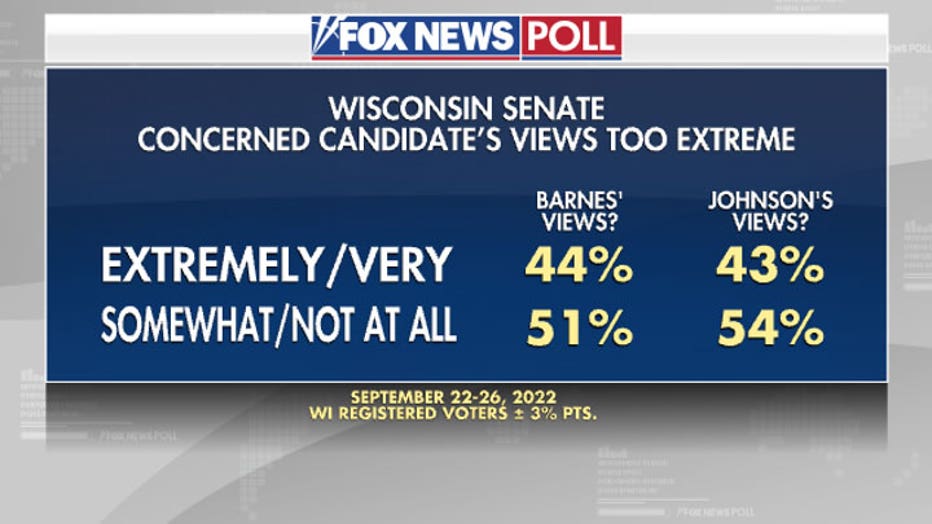 The increase in concern over Barnes’ views comes from Republicans (+25) and, more troublesome for his campaign, independents (+13). Nine in 10 Democrats remain unconcerned. 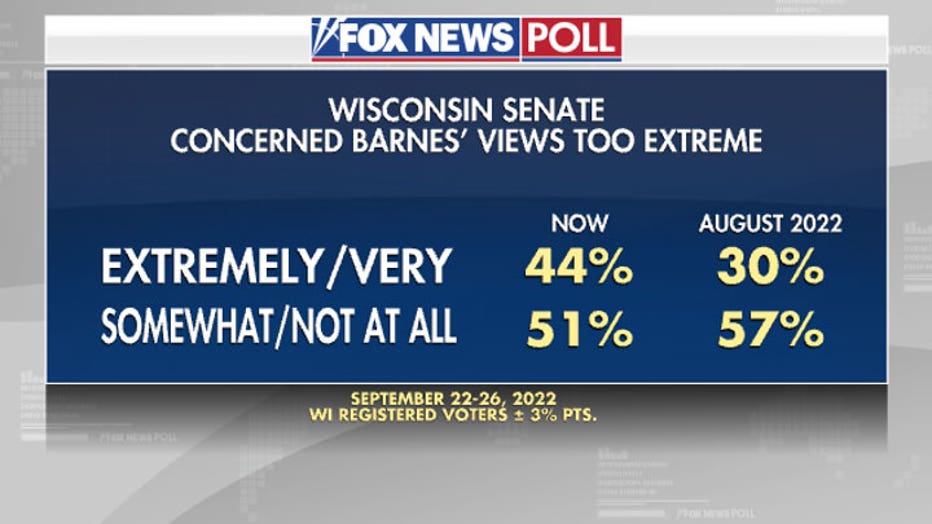 "Barnes’ central claim is that Johnson is an extremist who is out of touch with mainstream Wisconsin voters," says Shaw. "Over the past month, it looks like Johnson has used Barnes’ past associations with the ‘Squad’ and his environmental views to flip the script."

More of those backing Johnson (68%) than Barnes (50%) support their candidate enthusiastically.  In addition, the number excited to back Barnes is down from 57% in August. 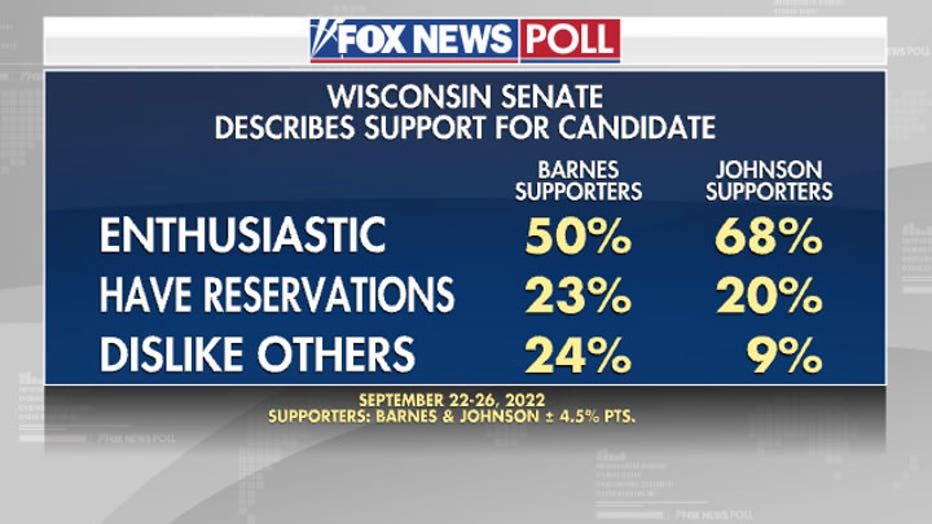 Preservation of American democracy (24%), inflation (20%), and abortion (16%) are the most important issues to voters in the Senate race.

Voters prioritizing inflation prefer Johnson by a wide margin, while Barnes is the pick among abortion voters and those focusing on protecting U.S. democracy.

On abortion, while more voters are angry (46%) than happy (30%) about the Supreme Court overturning Roe v. Wade, those happy (91%) with that decision are a touch more likely to say they’re certain to vote this year than those who are angry about it (87%). 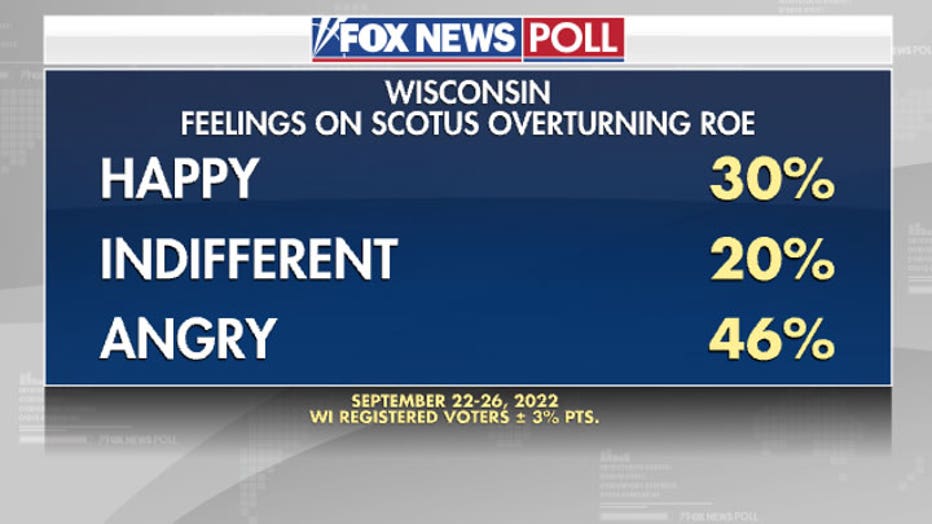 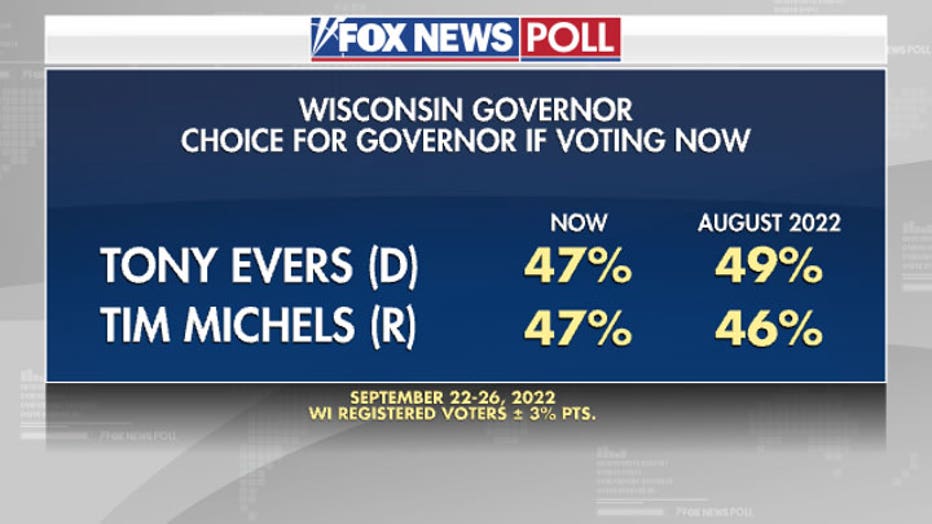 Evers narrowly won the seat in 2018 by about one percentage point and voters today split over the job he’s doing as governor, with 48% approving and 49% disapproving. By a 10-point margin, more strongly disapprove than strongly approve.

More of those supporting Evers (63%) than Michels (56%) back their candidate enthusiastically.

All in all, both sides of the aisle are motivated this year. Equal numbers of Wisconsin Democrats (89%) and Republicans (90%) rate their likelihood of voting as a 10 on a 10-point scale, and half of both parties describe themselves as more enthusiastic about voting this year than usual.

Joe Biden won Wisconsin in 2020 over Donald Trump by less than one percentage point.

Conducted September 22-26, 2022, under the joint direction of Beacon Research (D) and Shaw & Company (R), this Fox News surveys include interviews with 1,012 Wisconsin registered voters randomly selected from a statewide voter file and who spoke with live interviewers on both landlines and cellphones. The total sample has a margin of sampling error of plus or minus three percentage points.