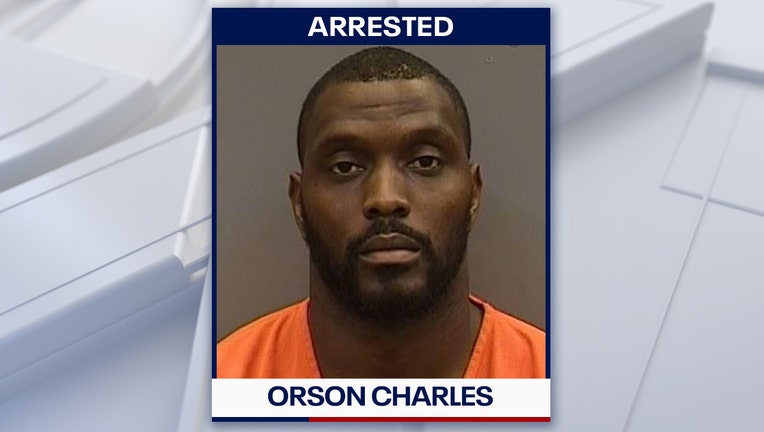 YBOR CITY, Fla. - Orson Charles, a former NFL player, and Plant High School football star, is in trouble with the law again after police say he threatened to shoot law enforcement officers Friday night while arguing over a parking space in Ybor City.

According to the Tampa Police Department, Charles and the victims were trying to park at the intersection of 19th Street and 8th Avenue shortly before midnight.

Police say, Charles, who was trying to enter the parking space from a different direction, got out of his car and approached the driver’s side of the victim’s vehicle.

While arguing with the victims, officers say Charles pulled out a gun and threatened to shoot them.

According to the Tampa Police Department, Charles continued the confrontation even after the victims identified themselves as law enforcement officers and pulled out their badges. The victims told police Charles told them, "What you trying to do…I don't give a f--k. I have one in the head."

The victims left the parking spot in their car because they ‘were afraid Charles was going to shoot them,' according to an arrest report. They reported the incident to an off-duty Hillsborough County Sheriff’s Office deputy and kept an eye on Charles until he was taken into custody.

Arresting officers say Charles had a firearm on him, but his concealed weapons permit had expired. According to TPD, he also had a misdemeanor amount of marijuana on him.

Charles starred at Plant High School during its football zenith. In 2008, he played for the championship team and then became an All-American tight-end at the University of Georgia. In 2012, he was drafted by the Cincinnati Bengals and went on to play with several other NFL teams.

According to ESPN, Charles was arrested in 2014 after allegedly pulling out a handgun during a road rage incident in Kentucky.

Charles has been charged with carrying a concealed firearm, aggravated assault with a deadly weapon, possession of a controlled substance and introducing contraband into a detention facility.