Video captured by the National Oceanic and Atmospheric Administration (NOAA) satellites GOESEast and GOES-18 show the extent of wildfire activity and smoke over the western United States from July 22 and 25.

In footage released on NOAA’s Twitter account, GOESEast shows California’s largest fire, named the Dixie fire, burning on July 22 from outer space. As of Monday, July 26, the Dixie fire spread to 197,487 acres and was 22% contained, according to InciWeb.

California fire officials say firefighters could possibly face a "significant increase" in fire behavior this week as smoke clears away from the fire. This week, dark plumes of smoke covered the Dixie fire — assisting firefighters by decreasing temperatures and containing fire behavior despite the blaze continuing to grow. 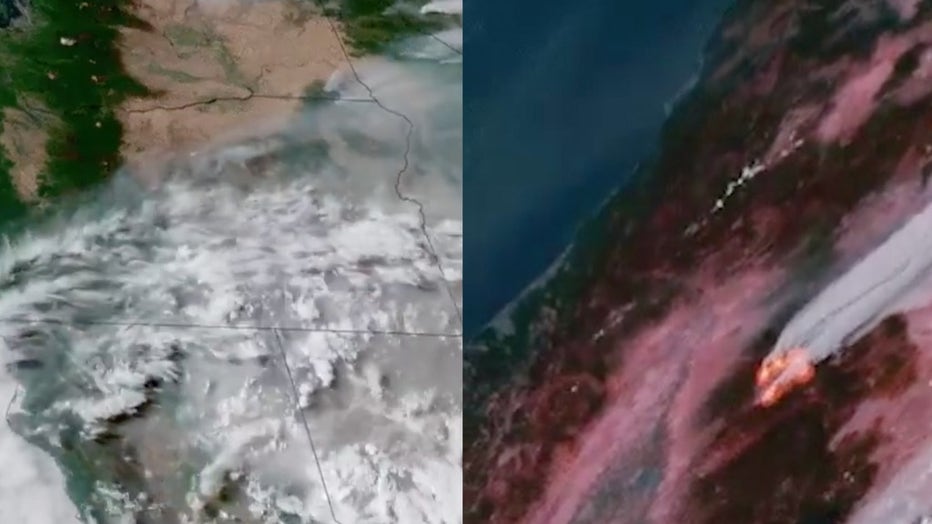 Satellites GOESEast and GOES-18 show the extent of wildfire activity and smoke over the western United States.

According to The Washington Post, more than 5,400 firefighters are fighting the blaze after it sparked two weeks ago and has since merged with a smaller, nearby fire.

The Dixie fire is one of 85 large fires raging across 13 western states, scorching over 1.5 million acres.

The images captured by GOES-17 show smoke from the wildfires in Montana, California, Idaho, Oregon and Washington spreading across the west on Sunday, July 25.

The smoke has traveled to the East Coast, forcing parts of Massachusetts to issue air quality alerts. Hazy skies were seen in Boston on July 26 as smoke from the cluster of western state fires lingered around the northeast.

Earlier this week, a California couple was charged with involuntary manslaughter after their gender reveal party sparked the El Dorado fire in September. The blaze killed 39-year-old Charles Morton and injured several others. Morton had worked as a firefighter for 18 years, mostly with the U.S. Forest Service. The couple has pleaded not guilty but if convicted they could face up to 20 years in prison.

The Associated Press contributed to this report. This story was reported from Boston.