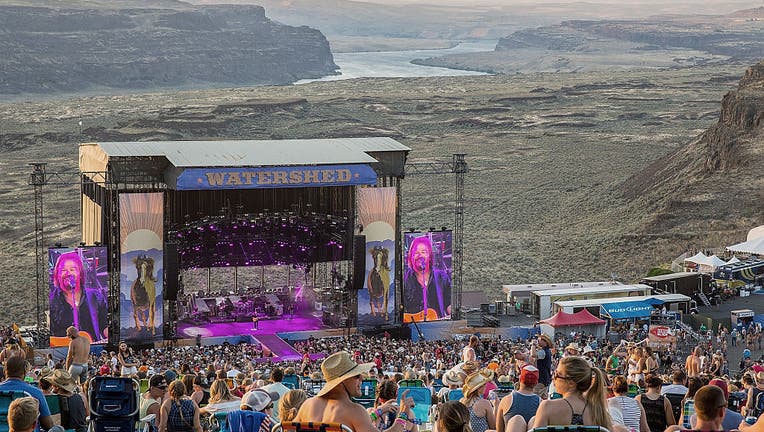 GRANT COUNTY, Wash. - The Grant County Sheriff's Office has backpedaled a previous claim that an Ephrata man arrested at the Gorge Amphitheater planned to carry out a mass shooting.

Deputies arrested 30-year-old Jonathan R. Moody for possession of a dangerous weapon and unlawful carrying or handling of a weapon at the concert venue Friday night. At the time, they said they suspected he planned to shoot the place up, but on Tuesday clarified they "don’t feel that his intent was to cause a mass shooting."

According to the Grant County Sheriff’s Office (GCSO), people attending the ‘Bass Canyon’ concert series reported a suspicious man in the parking lot to security officers. Witnesses said they observed the man inhale an unknown gas from a balloon, load two 9mm pistols from the trunk of his car and tuck both of them inside his waistband.

Authorities say Moody was walking around asking people what time the concert ended and where people would be exiting the venue.

Security officers detained and disarmed Moody outside the venue gates. Deputies say after investigating the incident, they arrested him on one count of possession of a dangerous weapon and one count of unlawful carrying or handling of a weapon.

According to the sheriff's office, Moody made his first appearance in court earlier in the day, where he pleaded not guilty. He then posted his $10,000 bail and was released Monday evening.

His next court date is scheduled for Sep. 8.

While the intent may not have been a mass shooting, authorities say the concertgoers did the right thing: see something, say something.

"Citizens saw something completely out of place for the circumstances and notified security, who in turn notified deputies," said the Grant County Sheriff’s Office in a Facebook post. "That combination of situational awareness along with noticing "something does not fit" resulted in a possible tragedy being prevented.