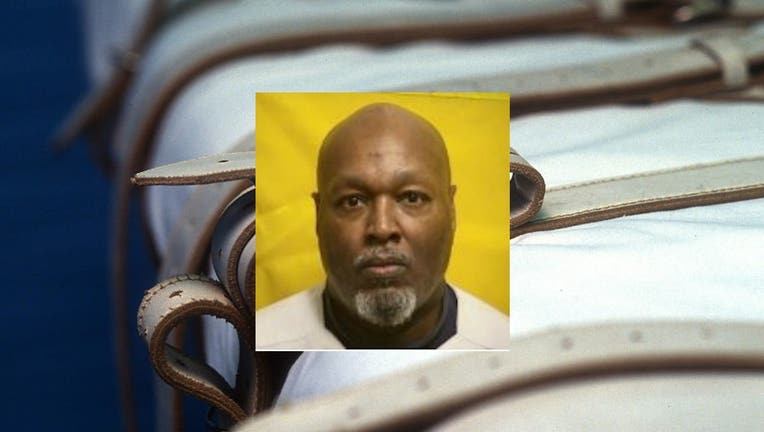 COLUMBUS, Ohio - An Ohio death row inmate who survived an attempt to execute him by lethal injection in 2009 died Monday of possible complications of COVID-19, the state prisons system said.

At the time of the 2009 procedure, condemned prisoner Romell Broom was only the second inmate nationally to survive an execution after they began in modern times.

Broom, 64, has been placed on the "COVID probable list" maintained by the Department of Rehabilitation and Correction, spokesperson Sara French said Tuesday. Inmates on that list are suspected to have died of COVID-19, pending a death certificate, she said.

The state says 124 inmates have died from confirmed or probable cases of the coronavirus. One death row inmate currently has a positive COVID-19 test, and 55 death row inmates tested positive and then recovered, French said.

Ohio unsuccessfully tried to put Broom, then age 53, to death by lethal injection on Sept. 15, 2009. The execution was called off after two hours when technicians could not find a suitable vein, and Broom cried in pain while receiving 18 needle sticks.

Broom was returned to death row, where he fought unsuccessfully to avoid a second execution. His most recent execution date was in June, but in the spring Republican Gov. Mike DeWine issued a reprieve and set a new date in March 2022.

His attorneys filed arguments with the U.S. Supreme Court that he should be spared a second attempt.

Broom survived the 2009 execution "only to live with the ever-increasing fear and distress that the same process would be used on him at his next execution date," attorneys Timothy Sweeney and Adele Shank said in a statement.

"Let his passing in this way, and not in the execution chamber, be the final word on whether a second attempt should ever have been considered," they said.

Broom was sentenced to die for raping and killing 14-year-old Tryna Middleton after abducting her in Cleveland in 1984 as she walked home from a football game with two friends.

Ohio is now under a de facto death penalty moratorium as DeWine has said lethal injection is no longer an option because of the state's inability to find drugs. He says lawmakers would have to choose a new method.

In 2015, the execution team began working on Broom, in a holding cell 17 steps from the execution chamber, at about 2 p.m., four hours after his execution’s originally scheduled time due to a final federal appeals request.

Broom even assisted his executioners by trying to help them find veins. When his help made no difference, he turned onto his back and covered his face with his hands. His torso heaved and his feet shook. He wiped his eyes and was handed a roll of toilet paper, which he used to wipe his brow.

When the technicians tried to use a vein in his leg, he grimaced, and a member of the execution team patted him on the back.

Since the introduction of the electric chair, three other death row inmates in the U.S. survived the first attempts to execute them after the process began.

— May 3, 1946: The execution of Willie Francis, 17, was called off after an improperly prepared electric chair failed to work in Louisiana. Francis was sentenced to die for the murder of St. Martinville, Louisiana, druggist Andrew Thomas, who once employed Francis. The U.S. Supreme Court ruled 5-4 to allow a second execution to proceed, rejecting double jeopardy arguments. Louisiana successfully executed the 18-year-old Francis by electric chair on May 9, 1947.

— Nov. 15, 2017: The execution of Alva Campbell, 69, by lethal injection was called off after members of Ohio’s execution team told the state prisons director they couldn’t find a vein. Campbell was sentenced to die for the shooting death of 18-year-old Charles Dials during a 1997 carjacking. In preparation for Campbell’s execution, the Ohio prisons department decided to provide him with a wedge-shaped pillow to help him breathe while he was put to death, because Campbell has chronic obstructive pulmonary disorder attributed to a decadeslong two-pack-a-day smoking habit.

— Feb. 22, 2018: The Alabama execution of Doyle Lee Hamm, 61, who had battled lymphoma, was called off about 2 1/2 hours after the U.S. Supreme Court cleared the execution to proceed after prison officials announced they were halting the procedure because medical staff did not think they could obtain "the appropriate venous access" before a midnight deadline. Hamm was sentenced to die for the 1987 slaying of motel clerk Patrick Cunningham.