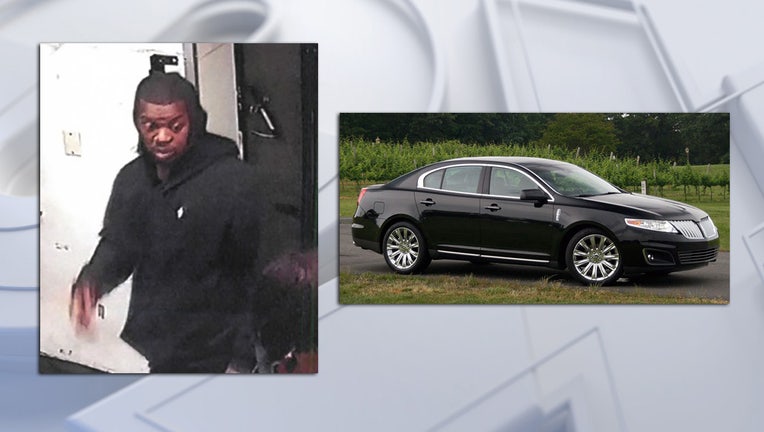 CALEDONIA, Wis. - Milwaukee and Caledonia police are looking for a man who they say carjacked someone in Milwaukee – and may be tied to a car theft in Caledonia.

Caledonia officials say shortly before 6 a.m., officers were sent to a vehicle driven into the grass at a wayside,. That vehicle was found to have been carjacked in Milwaukee Tuesday morning.

A few minutes later, a resident of the Candle Court apartments in Caledonia reported his black 2010 Lincoln MKS (similar to one pictured) was stolen. The plate of AAS4772 is displayed on the car. The vehicle had been left running outside – and the owner still had the remote fob in his possession.

An officer on his way to work had seen a subject (picture provided by MPD) walking southbound on Douglas by Matthew Drive 15 minutes earlier. It is believed that pedestrian was the car thief.

The suspect from the carjacking in Milwaukee was described as a male, Black, in his late 30s, with a stocky build, light beard, and a low haircut. He was seen wearing a black jogging suit and was armed with a large silver handgun.

The Wisconsin DNR is asking the public to stay vigilant and avoid burning because of potential fire danger across the state Tuesday, April 12.

James Svoboda, an ex-employee of Caledonia and Mount Pleasant, was sentenced for crimes related to the theft of more than $350,000 from the villages.