A Froedtert & Medical College of Wisconsin cancer patient is thanking his care team in an artistic way. designing custom lab coats for those who treated him.

MILWAUKEE - A Froedtert & Medical College of Wisconsin cancer patient is thanking his care team in an artistic way.

Hospital lighting and white lab coats can become mundane, so patient Lawrence Murphy is brightening up the mood with what he calls "therapeutic giveback."

"I iron the jacket, and then I just start and whatever happens, happens," he said.

Murphy was diagnosed the renal cancer five years ago. After he had surgery in 2018, he thanked his doctors on the anniversary year.

"All they need to do is keep me alive, and I’ll keep drawing," said Murphy. 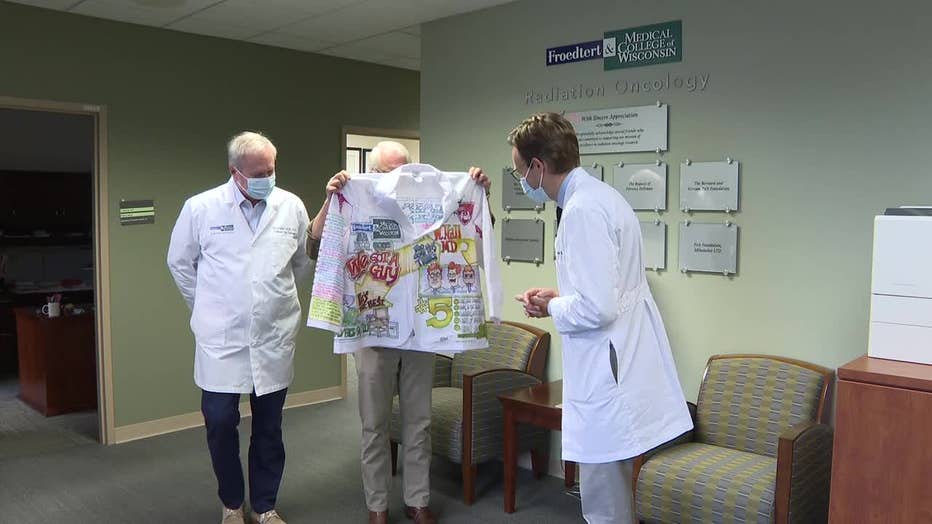 Murphy worked as chief designer for GE Healthcare, so he uses his artistic ability with magic markers and colored pencils to create pieces that honor those who care for him.

"It allows me to get the situation, get the experience, sort of out of my head through my hands onto a canvas which happens to be a coat. And I get to move way and move ahead," Murphy said.

"It looks like something that would be in sort of a modern fashion magazine," Hall said. "It’s what keeps me going, keeps me motivated, and keeps me getting up every morning enthusiastically coming here."

Murphy has made five coats now. He said they only take a few hours, but he will spend his life thanking those who save him. He hopes to makes 100 more coats in the future.

Hall plans to display his coat in his office.