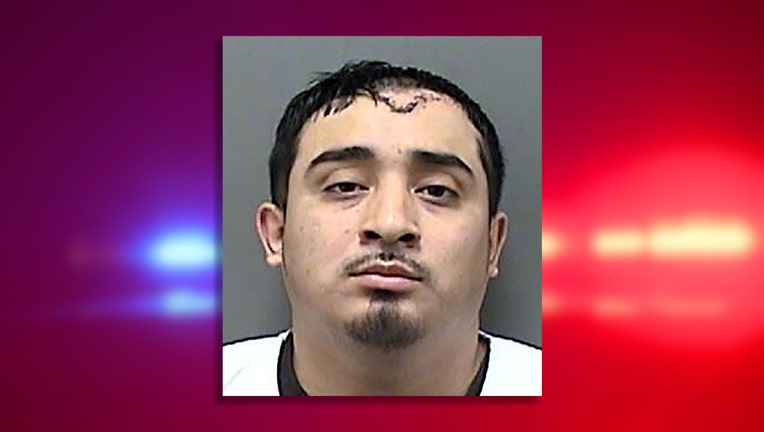 CALEDONIA, Wis. - A 26-year-old Milwaukee man is charged with 14 total counts in connection to a June 6 crash.

Prosecutors say Eusevio Garcia Jr. was intoxicated behind the wheel when he caused a high-speed, multi-car crash – injuring four other people – in Caledonia.

A Caledonia police officer was patrolling an area near County Highway V and Northwestern Avenue around 8:15 p.m. the night of the incidents. At that time, the officer came across two vehicles parked on the side of the road and believed it to be a broken-down vehicle scenario at the time.

Shortly after the officer passed the scene, a criminal complaint states he received a dispatch report of a reckless driver – matching one of the two pulled over vehicles, a red Dodge Charger.

The officer turned on his lights and circled back. He approached the car on foot, and the driver – since identified as Garcia – got into the Charger and drove off. The officer returned to his vehicle and began following the Charger, which illegally passed a vehicle near a hill, according to the complaint.

The officer lost sight of the vehicle as it went over the hill. When the officer made it over the hill himself, the complaint states several vehicles were pulled over, and the officer saw three damaged cars on the side of the road, too.

During the investigation, a download of information from Garcia's car found he was traveling at 121 mph less than two seconds before the airbags were deployed as a result of the crash.

The first car that was hit had three people inside – the driver and two passengers. All three were taken to the hospital, sustaining injuries that included whiplash, a neck strain and a hip contusion.

The driver of the second car that was hit was taken to the hospital, too. The complaint states her car flipped forward due to the impact. A download of information from her car showed she was traveling at 46 mph, but the impact from Garcia's car caused an additional acceleration of 43 mph. The driver was the only person in the car, and suffered a fractured vertebra, torn ligaments in her neck and had blood pooled in her spinal cord."

Garcia himself was taken to the hospital via Flight for Life due to his injuries.

A witness told police that the Charger was "heavily speeding" and "driving erratically" before it collided with other cars. Another witness said they saw the driver, Garcia, drinking alcohol while driving, according to the complaint.

Officers spoke with a woman at the scene who said she and Garcia were at Quarry Lake Park earlier. Garcia was drinking, she said, and he left with two children in the car. The woman said she saw Garcia pull over, and pulled over in front of him demanding that he not drive with the children. The children then got in her car. Once Garcia drove off, the woman said she saw him hit one car, and then a second immediately after the first.

The day after the crash, detectives spoke to Garcia at the hospital. He agreed to speak without a lawyer present, the complaint states.

Garcia told authorities he was at Quarry Lake and had been drinking. He said he did not remember the accident, but remembered being at the quarry and then being pulled from the car. The complaint states Garcia was asked why he did not remember; he said he was "blacked out."

Garcia is charged with:

A preliminary hearing in the case is scheduled for July 1.