Brown Deer police are looking for suspects who broke into more than 50 vehicles during the overnight hours from Sunday, Oct. 24, through Monday, Oct. 25.

BROWN DEER, Wis. - Brown Deer police are looking for those who broke into more than 50 vehicles during the overnight hours from Sunday, Oct. 24, through Monday, Oct. 25.

The vandals targeted vehicles parked at businesses and residences along Green Bay and Brown Deer Road. According to police, it appears the main purpose was to cause damage to as many vehicles as possible while ignoring most of the property contained within the vehicles.

In fact, Brown Deer police have surveillance video that they say shows several people smashing car windows for the heck of it, leaving valuables and a whole lot of broken glass behind. 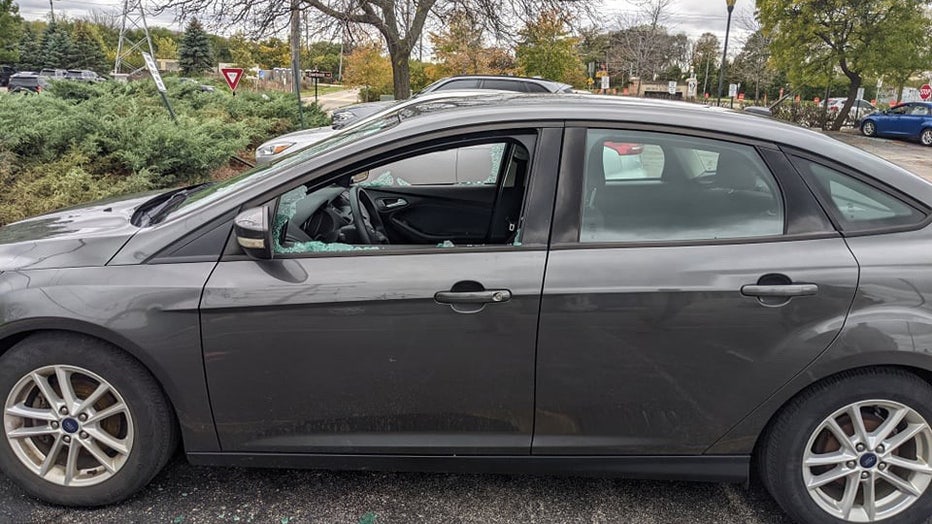 The vehicles hit include those belonging to the Army and first responders.

"All the windows completely smashed," said James Bryant, First Sergeant, U.S. Army. "It’s really sad that we have to take extra precautions to make sure these vehicles are safe when we are here to help the community."

At the Armed Forces Career Center, six government-owned vehicles parked in marked spots that would have been clear to anyone were hit.

"It’s very sad and unfortunate," said Bryant. "The Army is here to help out the community and do what we can to help our young adults to have a better path."

The same lot is shared with the Brown Deer Public Library, and because of nearby construction, North Shore Fire/Rescue.

"Members of the military have their vehicles broken into, first responders," said Battalion Chief Dan Tyk. "Not that we are any different than those – but at the end of the day it really stinks."

Tyk said three of his team’s personal vehicles were hit; the vandals leaving behind all items inside except for one pair of sunglasses.

"To hear there was no purpose behind it, it was just to smash windows, is disappointing," said Tyk.

This echoes a similar crime that happened on the other side of the Milwaukee/Brown Deer border in June 2020, when vandals broke 20 car windows and stole several vehicles near 75th and Glenbrook. The recent spree also included vehicles in grocery store and gym parking lots.

"This can happen even in a well-lit area along a busy street," said Tyk.

If you or a neighbor has any information, or if you have surveillance footage that may help the Brown Deer Police, you are urged to contact them at 414-371-2900 or via e-mail at stopcrime@bdpolice.org.

Milwaukee police say one man is dead and a second is wounded after a shooting near 21st and Wright on Monday afternoon, Oct. 25.

Milwaukee woman shot while driving near 19th and Courtland

A Milwaukee woman, 36, was shot while driving near 19th Place and Courtland.

The Marquette University Police Department is investigating an armed robbery at a business at 15th and State Street that happened on Monday, Oct. 25.

Arrest made in Brown Deer homicide

An arrest was made after a man was killed near 49th and Spring Lane in Brown Deer Wednesday, Oct. 20.