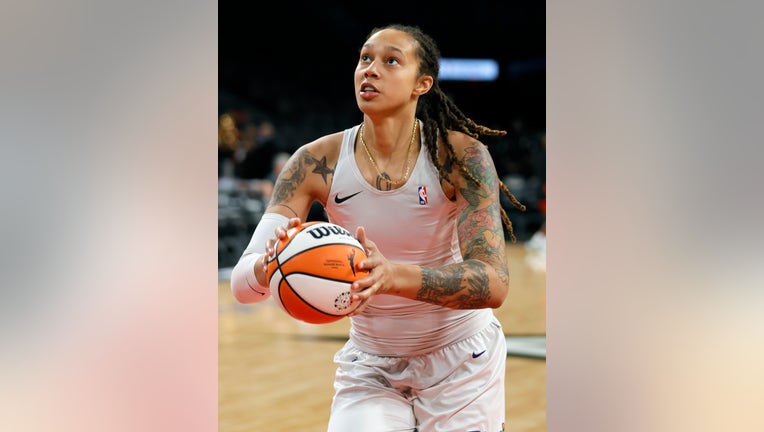 Brittney Griner of the Phoenix Mercury warms up before Game Five of the 2021 WNBA Playoffs semifinals against the Las Vegas Aces at Michelob ULTRA Arena on October 8, 2021 in Las Vegas, Nevada. (Photo by Ethan Miller/Getty Images)

PHOENIX - The State Department said Tuesday that it still pushing to have regular contact with WNBA star Brittney Griner of the Phoenix Mercury, who has been detained in Russia for nearly three months.

A consular official was able to meet with Griner last week, when her pre-trial detention in Russia was extended for one month. Griner has been detained — wrongfully, U.S. officials have said — since February, after vape cartridges containing oil derived from cannabis were allegedly found in her luggage at an airport in Moscow.

The NBA also weighed in on the matter Tuesday, with Commissioner Adam Silver saying in a televised interview that he is working "side by side" with WNBA Commissioner Cathy Engelbert to try and bring Griner home.

"That consular official came away with the impression that Brittney Griner is doing as well as might be expected under conditions that can only be described as exceedingly difficult," State Department spokesman Ned Price said in Washington. "But sporadic contact is not satisfactory. It also may not be consistent with the Vienna Convention to which Russia has subscribed."

The 31-year-old Griner — a two-time Olympic gold medalist for the U.S. — faces drug smuggling charges that carry a maximum penalty of 10 years in prison. The Biden administration says Griner is being wrongfully detained. The WNBA and U.S. officials have worked toward her release, without visible progress.

Whelan is a corporate security executive from Michigan who has been held in Russia. He was arrested in December 2018 while visiting for a friend’s wedding and was later sentenced to 16 years in prison on espionage-related charges that his family says are bogus.

Silver, speaking to ESPN in a televised interview from Chicago prior to the NBA draft lottery on Tuesday night, said his league was following the advice of experts when it did not take an aggressive approach during the early stages of Griner’s detention.

"We’ve been in touch with the White House, the State Department, hostage negotiators, every level of government and also through the private sector as well," Silver said. "Our No. 1 priority is her health and safety and making sure that she gets out of Russia."

As efforts continue to secure Griner's release, a prayer vigil took place in Houston, Tex. in honor of her.

The event took place outside Griner's old high school, with organizers asking that she be released and returned homes, along with other American captives.

"Freedom is important. We believe that Brittney is held in a country that doesn’t believe in the democracy of America," said Ajay Jackson, at the vigil. "If she was in the United States, because of her reputation, she would have been released under her own recognizance. She would have had a court date set. She would have been with her family right now. So, that’s one of the reasons why we are protesting, but we are also praying for Brittney Griner."

The Associated Press (AP) contributed to this report. This story was reported on from Phoenix.