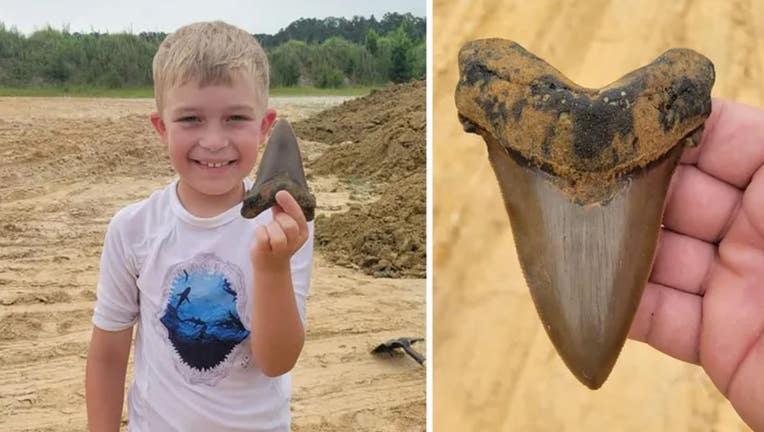 Riley Gracely, 8, found a fossilized shark tooth that's believed to be from the long-extinct angustidens, a prehistoric megatooth shark species. He found the tooth during a vacation trip in August 2022. (Palmetto Fossil Excursions and Team)

An outdoorsy eight-year-old found a fossilized shark tooth from a long-extinct species while he was on a family vacation in South Carolina earlier this month of August 2022.

Young Riley Gracely of Lebanon, Pennsylvania, traveled to Myrtle Beach, S.C., for vacation along with his father, Justin Gracely, his mother, Janelle Gracely, and his brother, Collin, in August.

During the trip, the family stopped by Palmetto Fossil Excursions, an educational fossil-hunting expedition facility in Summerville, South Carolina.

There, Riley "was walking around the bases of these piles of gravel and dirt and noticed what he thought was the edge of a tooth," said the proud father, Justin Gracely, in an email to Fox News Digital.

"When he pulled it out, he was so excited."

Riley had uncovered a 4.75-inch angustidens tooth in the company’s "premium" gravel layer.

"We are so proud of Riley," added Justin Gracely.

SHARK TOOTH HUNTING: HOW TO FIND TOOTHY TREASURES AND WHERE TO SEARCH

The dad said the staff at Palmetto Fossil Excursions explained the significance of Riley’s find, which reportedly stood out because of its "species, size and condition."

Angustidens were a prehistoric megatoothed shark that lived about 33 million to 22 million years during the Oligocene and Miocene epochs.

That's according to Mindat.org, a nonprofit mineral database and mineralogical reference website hosted by the Hudson Institute of Mineralogy of Keswick, Virginia.

Experts believe angustidens were a close relative of megalodons, an extinct prehistoric shark that’s said to be the largest shark species ever to live, which scientists have concluded based on since-discovered fossils.

WORLD'S OLDEST SHARK VICTIM ON RECORD GETS DECODED BY SCIENTISTS

Megalodons reportedly lived approximately 23 million to 3.6 million years ago during the early Miocene and Pliocene epochs.

Scientists estimate that megalodons measured up to 68.6 feet in length. 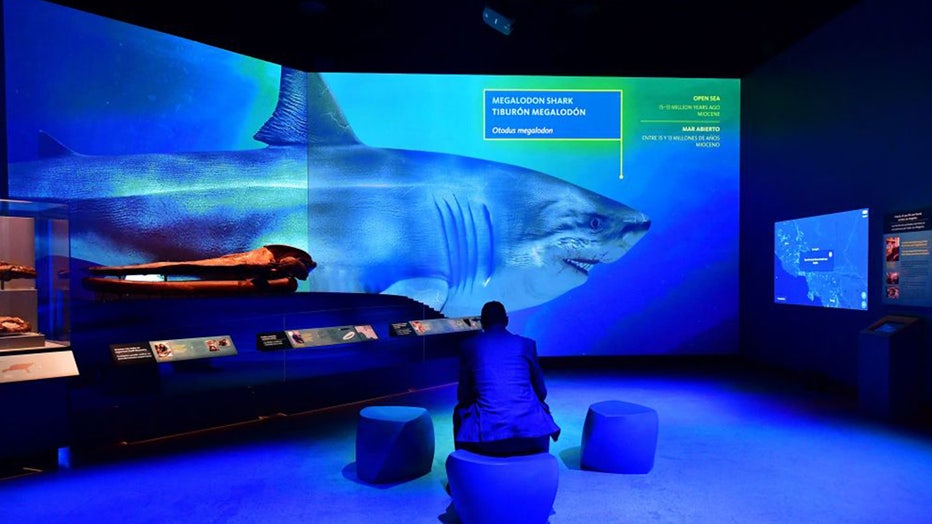 FILE - A life-size replica of the Megalodon Shark which roamed the open seas 15-13 million years ago moves across the screen during a press preview of "L.A Underwater - The Prehistoric Sea Beneath Us" at the Natural History Museum in Los Angeles, Cal (FREDERIC J. BROWN/AFP via Getty Images)

Angustidens, on the other hand, are believed to reach up to 30.5 feet, according to Prehistoric-Wildlife.com, a prehistoric creature guide.

"CONGRATULATIONS!!!!!!! This young man just scored a 4.75" Angustiden tooth in our Premium Gravel Layer piles on a dry dig!!!" wrote the Palmetto Fossil Excursions group in a Facebook post on Aug. 11.

"Again, congratulations, kiddo! Truly the find of a lifetime!!!"

One commenter, reacting to the post about Riley Gracely's find, wrote on Facebook, "So precious! He has the love for fossils already!" 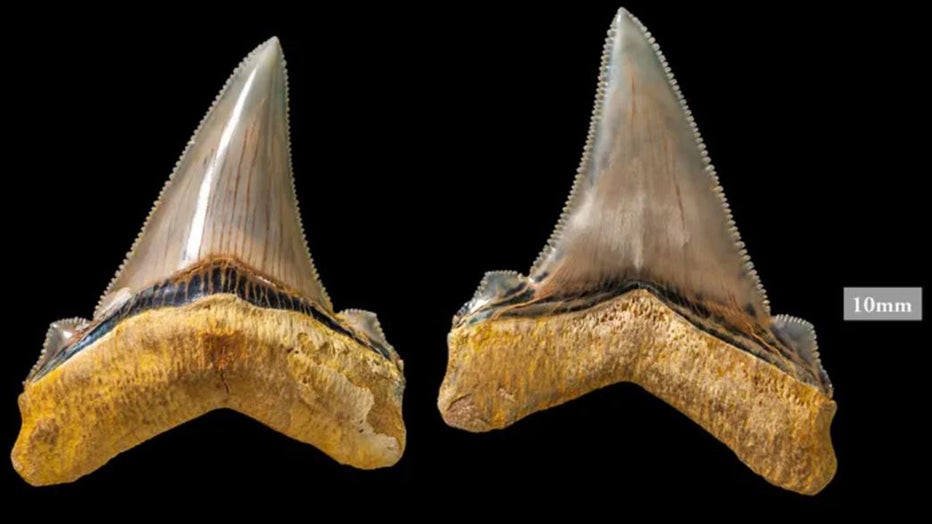 Riley Gracely’s dad Justin Gracely also told Fox News Digital that his son is an avid fisherman who loves science and the outdoors.

"His collection is still in its early stages, so he’s keeping it for now, but who knows in time," Justin Gracely wrote. "It would be nice for others to enjoy it, too."

The father added about the trip, "We probably found 7 or 8 species of teeth in all."

The Gracelys enjoy hunting for fossils as a family and have done creek excursions, dry digs and other premium gravel pile digs.

"This was our third straight year of excursions with this outfit, and they have been the best," Justin Gracely wrote. "I wish they had these excursions when I was younger because it is a blast."

He continued, "We vacation in Myrtle Beach every summer, so from the time that Riley and his brother Collin could walk, we’ve been into searching for these treasures on the beach."

"It’s something that anyone of any age can enjoy."

Palmetto Fossil Excursions explains that its team "began as a journey for two individuals to share their passion for paleontology with others," as it notes on its website.

"Today, the Palmetto team consists of multiple guides from various backgrounds that all bring something unique of their own to the table."

It adds, "Together we use our unique capabilities to work in unison to find new sites and new ways of teaching others about the past life that existed in the Coastal Plain region of South Carolina so that we can continue to offer an always-evolving experience to our clients."

They also explain more on Facebook about "the premium layer."

It's "the fossil layer that we are currently excavating from another location and trucking over to our 100-acre pit," the group notes on its Facebook page.

"The other location was scheduled to be turned into a giant pond, so running our excursions there on a long-term basis like we would have liked wasn’t really an option. Instead of losing all of the amazing fossils to water, the owner of that location has so graciously allowed us to dig up the fossil layer with an excavator for the last 3 months and have it trucked over to our pit."

They also explain, "We call it ‘premium’ due to the high quality of preservation in the hastalis, tigers, cows, great whites and bull shark teeth that are coming out of it. There are also a high number of megalodon teeth and large angustidens in the layer, along with whale, tapir, and other mammal teeth."

They add, "Simply speaking, this is some of the richest fossil layer we have ever seen. The colors on the fossils are also amazing, which is caused by the sediment in which they fossilized."