President Joe Biden appeared in Virginia on Feb. 10, 2022, to speak about how his "Build Back Better" legislation would limit the cost of prescription drugs.

CULPEPER, Va. - President Joe Biden on Thursday touted how his "Build Back Better" policies would limit the cost of prescription drugs and make life more affordable for U.S. families during an appearance in Virginia.

Biden’s visit to the town of Culpeper, Virginia, came on the heels of the release of the U.S. inflation report, which showed that consumer prices jumped 7.5% last month compared with a year earlier. It was the steepest year-over-year increase in four decades.

The pandemic disrupted supply chains and government aid boosted consumer demand, causing prices for gasoline, food and other goods such as autos to rise earlier this year.

"Inflation is up. It’s up." Biden said. "But the fact is that if we’re able to do the things I’m talking about, it will bring down the cost for average families."

The president said he will "work like the devil" to bring down gas prices and that "everyone has less money in their pockets today because of high drug costs," as he pledged that his policies would give family budgets some breathing room. He said pharmaceutical companies should be able to make a profit, though they cannot price drugs at levels that hurt people's financial wellbeing.

"The idea that you can charge whatever you want is just not going to happen in the United States of America if I have anything to do with it," the president said.

Biden’s roughly $1.75 trillion social and environmental package, officially called the Build Back Better Act, has been stalled in the Senate amid a months-long disagreement between more progressive and moderate Democrats on what should be included in the measure. The plan includes a wish list of Democratic priorities, such as an extended child care tax credit, climate legislation, paid family leave and universal prekindergarten.

The bill’s provision also includes capping out-of-pocket medication costs for Medicare recipients at $2,000 per year and insulin at $35 per month. In addition, Medicare would be allowed to negotiate prices for a limited number of prescription drugs and drugmakers would be required to pay rebates if they raise costs faster than inflation.

"In America, we pay the highest prescription drug prices of any developed nation in the world," the president said. He also noted the recent passage of the No Surprises Act, which prevents doctors or hospitals in many situations from billing insured patients higher rates because the care providers are not in their insurer’s coverage network.

"Millions of hardworking Americans no longer have to work about unexpected medical bills," Biden said, calling for the same transparency on drug prices. 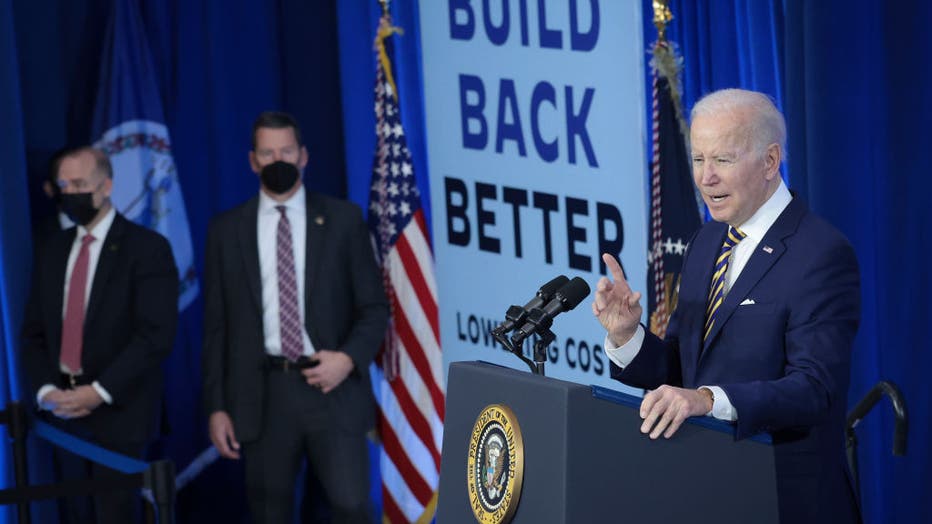 Biden has previously touted components of his sweeping agenda that would "hold drug companies accountable."

"Imagine if you're a parent of one of the roughly 200,000 young people in this country that suffer from Type 1 diabetes. Imagine if you can't afford their insulin," Biden said Dec. 6 in remarks from the White House. "It's not only a risk to your child's life, it deprives of you your dignity."

The president’s trip to Virginia also served as an opportunity for him to start promoting his party’s candidates in the 2022 midterm elections. He appeared alongside Rep. Abigail Spanberger, D-Va., who is in danger of losing her seat representing a central Virginia district.

Spanberger said she welcomes any effort to lower prescription drug prices and told reporters that the effort was about a broader attempt to reduce inflation.

Spanberger is one of several Democrats who have raised alarms about slipping support from voters. She suggested in a November interview with The New York Times that Biden had overreached with his plans for new government programs that recalled the Depression-era agenda of President Franklin D. Roosevelt.

After the article was published (https://www.nytimes.com/2021/11/03/us/politics/democrat-losses-2022.html), Spanberger said, she got a call from Biden, who said "this is President Roosevelt calling." Biden was "belly laughing," she said.

Prescription drugs remain a politically safe focal point for Biden’s visit, and Spanberger said the president was right to push forward on it.

"One of the most unsettling things for people is the inability to afford their prescription drugs," she said.

Efforts to lower prescription drug costs have long been popular with voters, but bipartisan consensus has proved elusive. It remains unclear if there's a political path forward for Biden's plans in Congress.

West Virginia Sen. Joe Manchin, the decisive Democratic vote, has said the priority should be on stopping inflation rather than on more government spending. Meanwhile, Republicans seized on Thursday's inflation report to blast Biden for his $1.9 trillion coronavirus relief package for fueling the spike in prices.

"Rampant inflation and soaring prices are crushing, crushing the American people," Senate Republican leader Mitch McConnell said Thursday in remarks on the Senate floor. "If you haven't personally gotten a pay raise of 8% or more in the last year, then Democrats' policies have given you a pay cut."