President Joe Biden said that he plans to run for reelection in 2024 when asked at his first news conference since becoming president. Biden took questions for just over an hour on the border crisis, foreign affairs, COVID-19 relief, among other topics.

WASHINGTON - President Joe Biden on Friday condemned a sweeping Republican-sponsored overhaul of state elections in Georgia that includes new restrictions on voting by mail and greater legislative control over how elections are run. He urged Congress to move quickly to bolster voting rights across the nation in response.

The law, signed this week by Georgia Gov. Brian Kemp, drew protests and criticism from Democrats and voting rights groups, who say it will disproportionately disenfranchise voters of color.

"This is Jim Crow in the 21st Century. It must end," the president’s statement reads. "We have a moral and Constitutional obligation to act."

Kemp lashed back on Friday, accusing Biden of attempting to "destroy the sanctity and security of the ballot box."

It is one of a wave of GOP-backed election bills introduced in states around the country after former President Donald Trump stoked false claims that fraud led to his 2020 election defeat. It also follows Georgia’s record-breaking turnout that led to Democratic victories in the presidential contest and two U.S. Senate runoffs in the once reliably red state.

"Instead of celebrating the rights of all Georgians to vote or winning campaigns on the merits of their ideas, Republicans in the state instead rushed through an un-American law to deny people the right to vote," the president said. "This law, like so many others being pursued by Republicans in statehouses across the country is a blatant attack on the Constitution and good conscience." 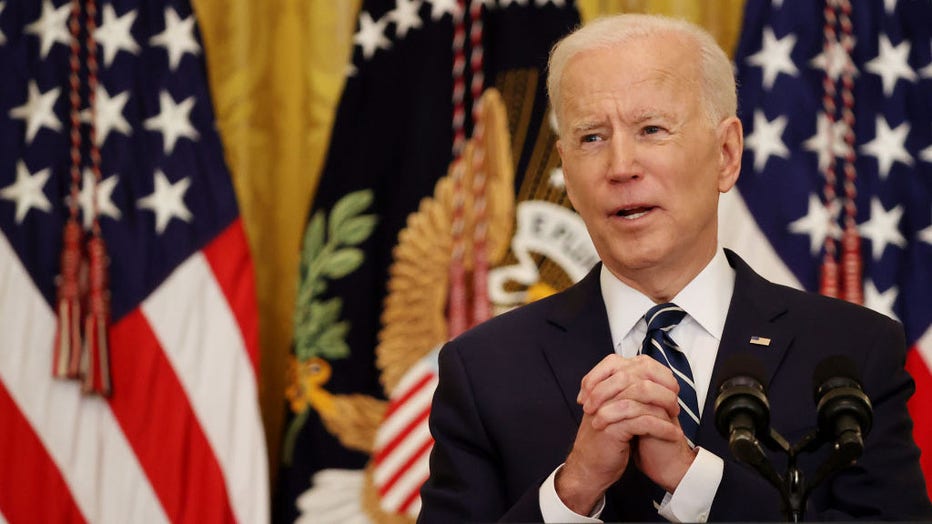 President Joe Biden answers questions during the first news conference of his presidency in the East Room of the White House on March 25, 2021 in Washington, D.C. (Photo by Chip Somodevilla/Getty Images)

The new Georgia law requires a photo ID in order to vote absentee by mail, after more than 1.3 million Georgia voters used that option during the COVID-19 pandemic. It also cuts the time people have to request an absentee ballot and limits where ballot drop boxes can be placed and when they can be accessed.

Defending the law, Kemp said: "There is nothing ‘Jim Crow’ about requiring a photo or state-issued ID to vote by absentee ballot — every Georgia voter must already do so when voting in-person."

Republican Rep. Jan Jones said the provisions cutting the time people have to request an absentee ballot are meant to "increase the likelihood of a voter’s vote being cast successfully," after concerns were raised about mail ballots not being received in time to be counted.

One of the biggest changes gives the GOP-controlled legislature more control over election administration. That has raised alarms about potential greater partisan influence.

The law replaces the elected secretary of state as the chair of the state election board with a new appointee of the legislature after Republican Secretary of State Brad Raffensperger rebuffed Trump's attempts to overturn Georgia's election results. It also allows the board to remove and replace county election officials deemed to be under-performing.

That provision is widely seen as something that could be used to target Fulton County, a Democratic stronghold covering most of Atlanta, which came under fire after long lines plagued summertime primary elections.

The law also reduces the timeframe in which runoff elections are held, including the amount of early voting for runoffs. And it bars outside groups from handing out food or water to people in line to vote.

Biden’s statement noted the food and water ban for voters waiting in line, "lines Republican officials themselves have created by reducing the number of polling sites across the state, disproportionately in Black neighborhoods."

The law does not contain some of the more contentious proposals floated by Republicans earlier, including limits on early voting on Sundays, a popular day for Black churchgoers to vote in "souls to the polls" events. It instead mandates two Saturdays of early voting ahead of general elections, when only one had been mandatory, and leaves two Sundays as optional.

"We are witnessing right now a massive and unabashed assault on voting rights unlike anything we’ve seen since the Jim Crow era," Butler added.

Kemp signed the bill on Thursday, less than two hours after it cleared the Georgia General Assembly. The state House approved it 100-75, before the state Senate quickly agreed to House changes, 34-20. Republicans supported it, with Democrats opposed.

"After the November election last year, I knew, like so many of you, that significant reforms to our state elections were needed," said Kemp, who drew Trump's ire after certifying Biden's victory in Georgia.

Democratic Rep. Rhonda Burnough said the bill is based on lies told by Republicans after November’s election.

"Georgians turned out in record-breaking numbers because they could access the ballot," Burnough said. "Lies upon lies were told about our elections in response, and now this bill is before us built on those same lies."