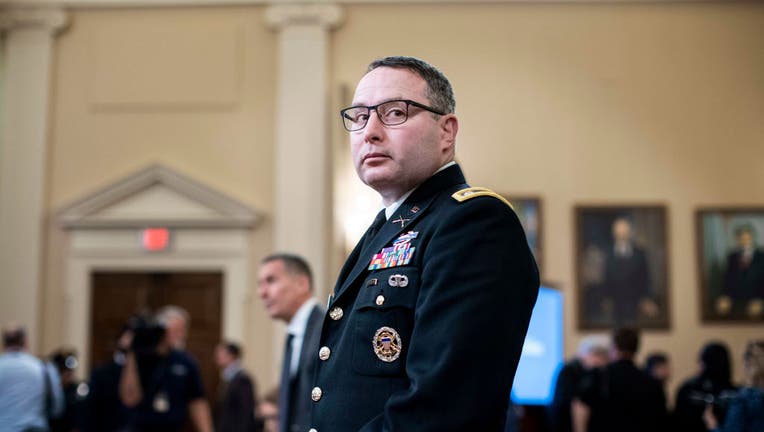 WASHINGTON (AP) - A retired Army lieutenant colonel who was a pivotal witness in the first impeachment case against Donald Trump has sued the oldest son of the former president and other Trump allies, accusing them of participating in an "intentional, concerted campaign of unlawful intimidation and retaliation" over his decision to testify.

The lawsuit from Alexander Vindman, who testified during 2019 impeachment proceedings about a phone call in which Trump pressed his Ukraine counterpart to investigate Democratic rival Joe Biden and his son, Hunter, was filed Wednesday in federal court in Washington. Trump was impeached by the House but acquitted by the Senate in February 2020.

It alleges that after Vindman was summoned by House lawmakers to testify, the defendants and others coordinated and advanced "false narratives" about him, including that he was a spy for Ukraine and had spoken pejoratively about the U.S. to foreign officials; leaked classified information about him; falsely accused him of lying under oath; and worked to derail his expected promotion to colonel.

"The actions taken by Defendants against Lt. Col. Vindman sent a message to other potential witnesses as well: cooperate at your own peril," the suit states, adding that "the message reverberates to this day" as witnesses in the congressional investigation into the Jan. 6 riot at the U.S. Capitol defy subpoenas at the Republican former president’s direction.

In a rebuff to former President Donald Trump, the Supreme Court is allowing the release of presidential documents sought by the congressional committee investigating the Jan. 6 insurrection.

Vindman, an Iraq war veteran whose family fled the Soviet Union when he was a child, was a key impeachment witness, testifying that he twice raised concerns over the Trump administration’s push to have Ukraine investigate Biden. After listening to the July 2019 call between Trump and Ukraine leader Volodymyr Zelenskyy, he said he reported his concerns to a lawyer at the National Security Council.

Vindman says in the suit that he swiftly became a "household name" thanks to a intimidation campaign laden with falsehoods.

"The attacks on Lt. Col. Vindman did not simply happen by accident or coincidence, nor were they the result of normal politics or modern newscycles," the lawsuit states.

"Rather," it adds, "the coordinated campaign was the result of a common understanding and agreement among and between President Trump, Defendants, and others comprising a close group of aides and associates inside and outside of the White House, to target Lt. Col. Vindman in a specific way for the specific purpose of intimidation and retaliation."

As a result of the treatment, Vindman "has sustained significant financial, emotional, and reputational harm," according to the lawsuit, which seeks compensatory and punitive damages.

Vindman announced in July 2020 that he was retiring from the Army after more than 21 years, and at the time raised similar allegations of harassment, bullying and intimidation as in Wednesday’s lawsuit. He has since come out with a book about his experiences, titled, "Here, Right Matters: An American Story."