Four teenagers were shot in a drive-by attack outside an ice cream shop across the street from Schurz High School on the Northwest Side Wednesday afternoon, according to Chicago police.

CHICAGO - Four teens were shot in a drive-by attack outside an ice cream shop across the street from Schurz High School on the Northwest Side Wednesday afternoon, according to Chicago police.

The group was in the patio area of the shop in the 3600 block of North Milwaukee Avenue when a dark-colored SUV drove by and someone inside the vehicle opened fire around 2:45 p.m., Deputy Police Chief Roberto Nieves told reporters.

Four teens were shot in a drive-by attack outside an ice cream shop across the street from Schurz High School on the Northwest Side Wednesday afternoon, according to Chicago police.

Officials confirm that two of the four victims are Chicago Public Schools students, but couldn’t disclose whether they attend Schurz. One of the victims is a student at an alternative school, according to police.

"Next thing you know, we have someone rushing toward the restaurant saying they got shot," said Jordie Lopez, who works nearby. "He was just fighting basically for his life, trying to hold onto the blood."

Lopez said he provided aid to the victim and called 911.

The shooting unfolded just minutes before the final bell rang at Schurz High School, but Nieves said some students had been dismissed prior to that.

"This is very upsetting, we understand that, we are very upset ourselves and frustrated with this," said Nieves. "Our number one priority is the safety of our kids."

Four people were shot in a drive-by attack Wednesday afternoon outside an ice cream shop across the street from Schurz High School on Chicago's Northwest Side, authorities said.

The shooting unfolded just three days into the school year, with classes for CPS students beginning on Monday.

Mily Garcia was waiting outside the school to pick up her daughter when she spoke with another parent who saw someone open fire from a passing SUV at a group at La Michoacana ice cream shop, a popular hangout spot for students after school.

Garcia said La Michoacana has been a sore spot for parents because fights between students break out there regularly. She said she’s spoken to several parents who want the restaurant to be closed.

"Once I heard the shots, I just tried to get down, told my wife to do the same thing," said Jose Villanueva, who was waiting for his niece outside of Schurz High School.

An employee inside the restaurant said she was working when she and a co-worker got down to the floor after hearing at least four shots ring out. Moments later, the worker — who didn’t want to be identified — heard screams outside.

The school was placed on a ‘soft lockdown,’ according to a spokesperson with CPS, which delayed Wednesday’s dismissal.

"We thought it was a drill at first," said one student, who asked not to be named. 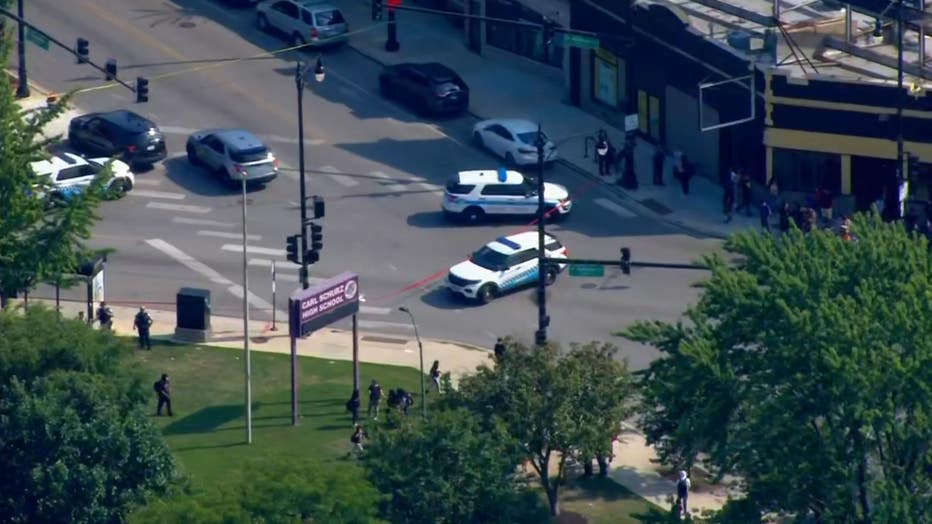 Five minutes after being told to remain in their classrooms, the students said they realized it was more serious.

The safety of your children is always our top priority, which is why we must inform you of an incident that affected our school this afternoon. Shortly before dismissal, there were shots fired across the street from our school building. We immediately contacted the Chicago Police Department (CPD) and the CPS Office of Safety and Security to protect the safety of all students and staff members and went on soft lockdown, which delayed dismissal. CPD and paramedics quickly arrived and responded, and the soft lockdown was lifted once there was no longer a safety threat. Due to the privacy of those impacted, we cannot give any further details.

Please know that we are taking this matter extremely seriously. CPS and CPD will be providing additional safety supports to our school this week, and many members of our community may be aware of this incident. If your child witnessed this incident and voices any concerns or fears, please contact us. The CPS Crisis team and Schurz staff will be available to any students who may need additional support.

I know you must have questions and concerns, I am hosting a parent meeting on Friday. I will share the meeting details with you tomorrow.

If you have any questions or concerns, please contact us."

Jamari Williams, 15, was killed two blocks from Simeon High School in September of 2021, minutes after school had let out for the day in Chatham. His classmate Kentrell McNeal, also 15, was fatally shot hours later in Hyde Park, with their two deaths rocking the school community for months.

The following month, a 14-year-old girl and a security guard were shot as they walked out of Phillips Academy High School in Bronzeville. The student, struck by gunfire in the doorway of her school, underwent surgery and was hospitalized for days.

CPS communities have struggled with gun violence trauma over the years, often finding a lack of resources to help both children and staff cope with the shooting or killing of a student. Chicago educators and parents have envied the trauma response for students in Highland Park as they head back to schools after the suburb’s 4th of July tragedy.

The district partnered with police and fire personnel for an active shooter drill, and CPS safety and security chief Jadine Chou said schools are ready for that type of emergency. But the next step is to figure out how to better protect kids away from schools, she said.

Schurz High School is located in the Old Irving Park neighborhood. In 2019, a 17-year-old boy was shot and killed when a gunman standing on a corner near the school shot at his car. In 2006, three students were shot across the street from the school.

No one is in custody, according to police.

Moving forward, Nieves said police patrols will be enhanced near the school during arrival and dismissal times. He asked anyone with information about the shooting to contact Area 5 detectives.