Pedestrians struck by vehicle during rally near Mayfair

WAUWATOSA, Wis. - Two people were hurt in a hit-and-run crash at the scene of a pro-Trump rally in Wauwatosa on Saturday, Nov. 21.

Police said around 11 a.m., two pedestrians were struck by a vehicle at Mayfair Road and North Avenue and sustained minor injuries.

The striking driver fled the scene.

A drone photographer reached out to FOX6 News with footage of the incident in which a red vehicle struck the pedestrians. Below are still shots from Chris Hammerbeck's footage: 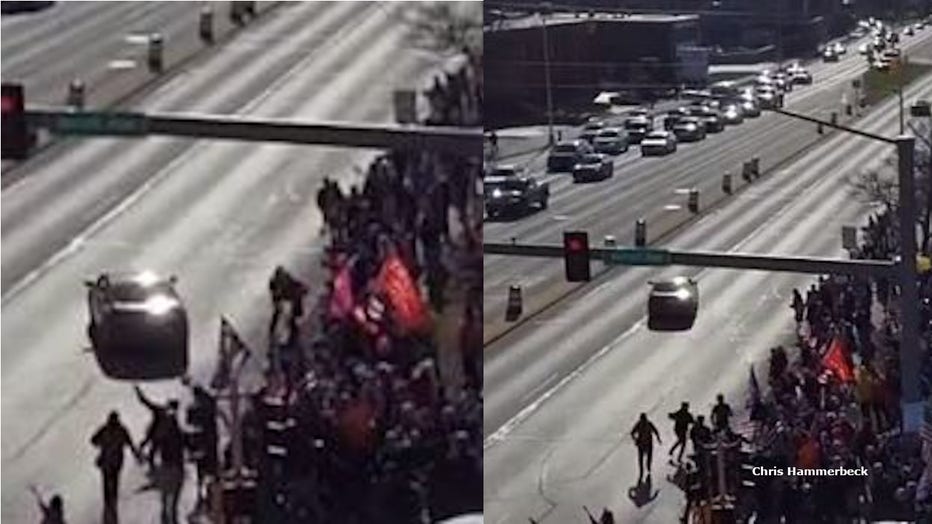 The rally took place Saturday morning at the intersection where the crash happened. Wauwatosa police said law enforcement monitored approximately 500 to 600 people lining the sidewalks. According to a police statement on Saturday afternoon, "overall, the rally was peaceful."

One person was arrested for "attempting to incite an altercation" -- issued a disorderly conduct citation and released.

"We appreciate that a majority of the group stayed on the sidewalk which allowed traffic to move through the area. The Wauwatosa Police Department continues to support the First Amendment right to peaceably assemble," police said in the statement.