A pastor in the East Texas town of Winona was shot and killed when a man hiding in the church took the pastor's gun and turned it on him.

WINONA, Texas (AP) - A pastor was killed and two other people were injured in a shooting at an East Texas church Sunday after the pastor confronted a man who had hidden from police in the church overnight, a local sheriff said.

Authorities had been using dogs and drones to search for the man late Saturday in woods near Winona following a car chase, and the pastor of the nearby Starrville Methodist Church discovered him hiding in a church bathroom Sunday morning, Smith County Sheriff Larry Smith said at a news conference.

Smith said he did not know why the man was initially being pursued but that the license plates on his vehicle were "fictitious."

The pastor drew a gun and ordered the man to stop, Smith said, but the man grabbed the weapon and began shooting with it. The pastor was killed, a second person was injured by gunfire and another was hurt in a fall.

The man stole the pastor's vehicle and fled east before being arrested by deputies in nearby Harrison County, Smith said. He said the man was hospitalized Sunday afternoon with gunshot wounds to his hand, but that it's unclear when he was shot.

Smith declined to identify the pastor, the other people injured or the suspect. The sheriff said the shooting suspect will likely face a capital murder charge.

The shooting was reported around 9:20 a.m., and there were no services going on at that time, said Sgt. Larry Christian, of the sheriff's office. Smith said the pastor, his wife and two other people were in the church at the time. 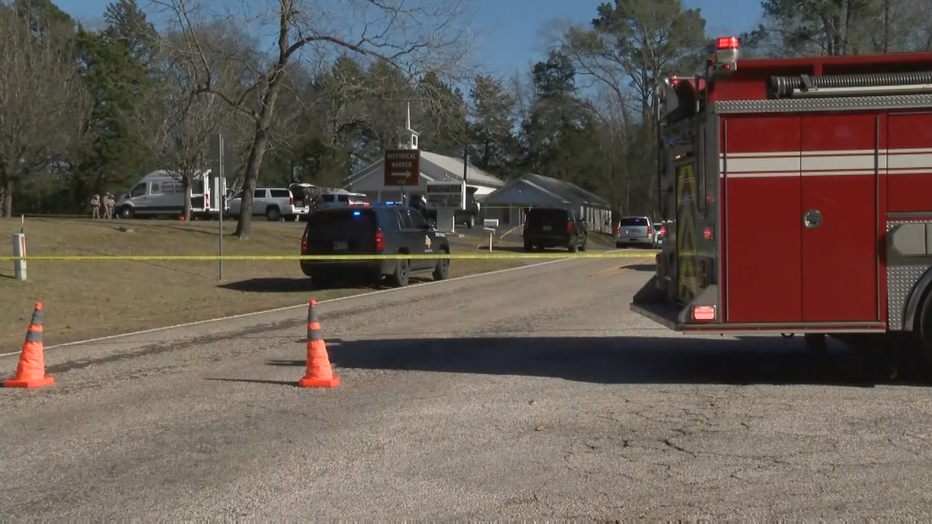 The man appears to have taken shelter in the church out of convenience and there's nothing to indicate the shooting was motivated by religious animus, the sheriff said.

"This is not a church-related, religion-related offense," said Smith.

"Our hearts are with the victims and the families of those killed or injured in this terrible tragedy," he said in a statement.

It's unclear exactly when the man entered the church in Starrville, near Winona, about 100 miles east of Dallas.

The shooting came a little more than a year after a gunman opened fire at a church in White Settlement, killing two people before he was fatally shot by a congregant.

Texas officials hailed the congregant's quick action, saying it prevented further killing and showed the effectiveness of the state's permissive gun laws, including a 2019 measure that affirmed the right of licensed handgun holders to carry a weapon in places of worship.

That law was passed in response to the 2017 massacre at First Baptist Church of Sutherland Springs,  where a man fatally shot more than two dozen people at a Sunday service before taking his own life.

Since then, a cottage industry has sprung up in Texas and other states to train and arm civilians to protect their churches using the techniques and equipment of law enforcement.