One of the worst storm systems to hit the state of Wisconsin on May 30th, 1998.

MILWAUKEE - During the afternoon of May 30, 1998, a low-pressure system moved through the Upper Plains region, creating a very favorable environment for severe weather. These storms continued to strengthen and eventually formed a complex of thunderstorms by early evening, the beginnings of a derecho.

The complex of thunderstorms continued to race off to the east and southeast, gaining strength in eastern Minnesota before entering western Wisconsin around midnight. At this point, the line of storms had reached its mature stage and appeared to be a well-defined squall. Wind speeds in excess of 70 mph were common across the state with wind gusts up to 128 mph recorded in Dodge County!

After traveling across all of Southern Wisconsin, the storm system arrived in the Milwaukee area, causing widespread damage. Wind speeds in Milwaukee County ranged from 71 - 110 mph as the system raced over Lake Michigan. Several tornado reports were also later confirmed across the area.

The system later dissipated the next day, but not before reaching western New York! Widespread damage could also be found across Michigan and Ontario. 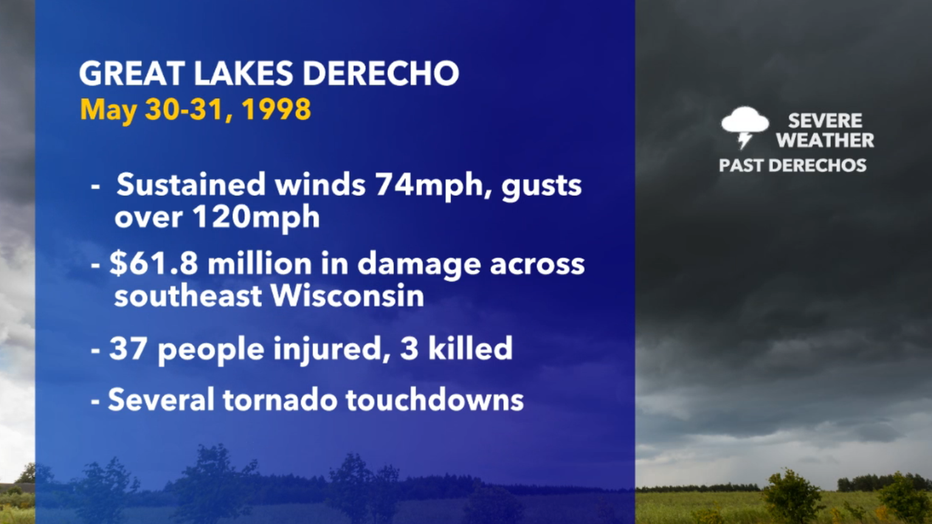 In all, about 250,000 Wisconsin residents lost power, and it remained out of service for almost a week! Total damage estimates surpassed $60 million as a result of the severe wind.

A derecho, defined as a widespread, long-lived wind event caused by a fast-moving complex of thunderstorms, is known for large swaths of significant wind damage that extends for more than 250 miles with sustained winds of at least 58 mph. This derecho traveled a whopping 975 miles with wind speeds even higher than that!

This event is an important reminder that this is severe weather season. Even though we have yet to see a severe storm in our area, it will happen, and you should be prepared. Be sure to have multiple alert systems ready in your home, such as your cellphone and a weather radio. Also, make sure to download the FOX6 Storm Center app and stay tuned to the latest forecast from your FOX6 Weather Experts.