MILWAUKEE - On this day 21 years ago, the Storm Prediction Center issued a tornado watch for southeastern Wisconsin at 1:55 p.m. Temperatures soared into the 70s that afternoon, with record highs recorded in both Madison and Milwaukee at 77 degrees!

Later that evening, a cold front began to move through the area, sparking thunderstorms in southern Wisconsin. One storm in southern Milwaukee county began rotating along a section of the front that was impacting a westward-moving lake breeze. That rotation began to strengthen, and around 6 p.m. that evening, a rare March tornado touched down just east of Runway 19 at General Mitchell International Airport.

The tornado continued to travel northeast for 2.2 miles, impacting the cities of Milwaukee, Cudahy, and St. Francis, before eventually lifting over St. Francis. 53 residential structures and eight businesses were damaged as a result, adding up to $4.6 million in total damages. There were 15 injuries reported.

The tornado later received an F1 rating by the National Weather Service for sustained winds of 110 mph. 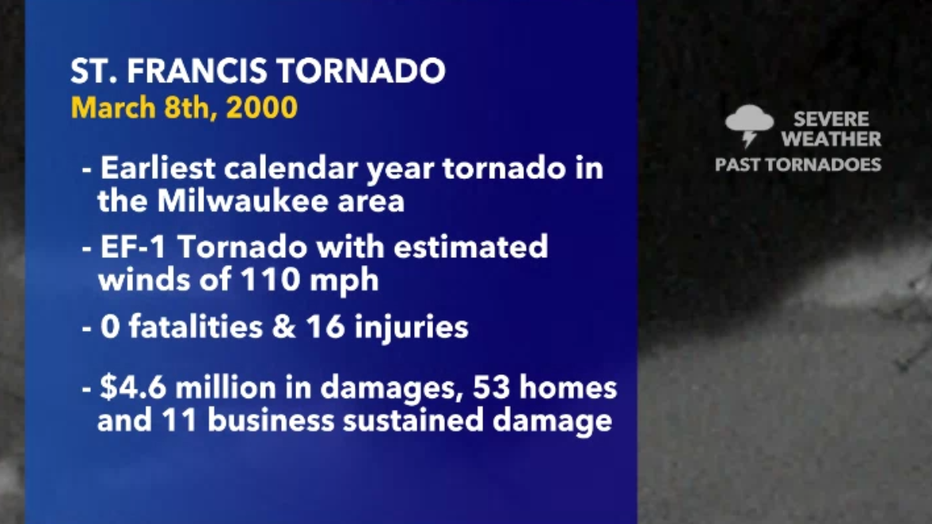 This tornado is a reminder that severe weather can strike even this early in the season. So remember to practice your tornado safety plan, test batteries for weather radios, and make sure you download the FOX6 Storm Center App!