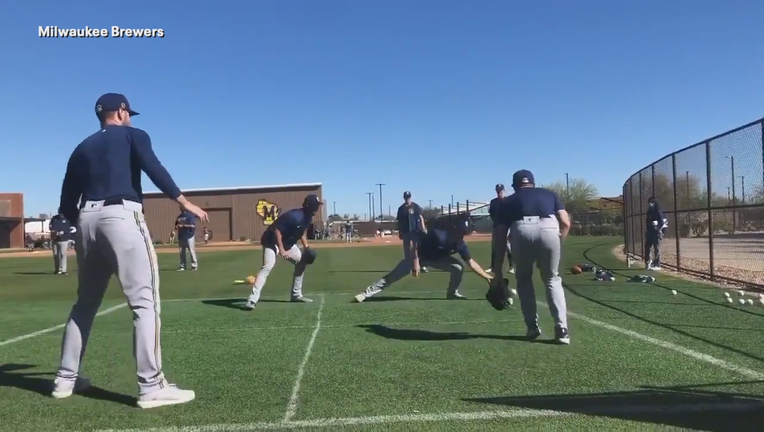 MILWAUKEE - Christian Yelich and the Milwaukee Brewers showed signs this spring that they’ll bounce back from the slump that engulfed virtually their entire lineup last year.

Of course, they aren't taking anything for granted until they perform when the games matter. They'll get their first chance in Thursday's opener against the Minnesota Twins.

"I feel like I'm in a good place and where I want to be heading into the season," Yelich said. "So I'm excited to get things started."

Milwaukee is seeking a fourth straight postseason berth after sneaking into the playoffs last year with a 29-31 record despite ranking 27th out of 30 major league teams in runs per game. Hitters up and down their lineup failed to reach their career norms.

All of them showed signs of progress in the preseason. For instance, Yelich batted .393 with a .500 on-base percentage and 1.357 OPS.

"I think he’s as enthused about starting a season as probably any player I’ve been around," president of baseball operations David Stearns said.

Plenty of other Brewers who slumped last year performed well this spring.

"Spring training is very different than the regular season," Stearns said. "But, given some of the performances we had last year, having guys going into the regular season with a really good frame of mind, with confidence, with belief in themselves and each other, I think there’s a degree of importance to it. I know as well as anyone that this can all change in one direction or another after a week."

Another encouraging preseason performance came from Kolten Wong, the Gold Glove second baseman who signed with Milwaukee after spending eight seasons with the St. Louis Cardinals. Wong batted .306 with a .375 on-base percentage and 1.097 OPS.

The Brewers are encouraged by those spring statistics but also not getting carried away over sample sizes ranging from 30-50 at bats in more relaxed settings.

"I think what’s great from the spring is that we’re healthy," manager Craig Counsell said. "That’s what I like about the spring. We’re coming into the season healthy."

The Brewers believe the additions of Wong and former Boston Red Sox outfielder Jackie Bradley Jr. will add depth to the lineup and boost the defense. They also will have a full season from outfielder Lorenzo Cain, who played just five games last year before opting out.

Whether those hitters can build on the momentum they established in the Cactus League remains uncertain. But it at least should give them some reason for optimism.

"That’s something they can lean on during struggles as much as anything," Counsell said. "There’s going to be struggles. There’s going to be guys that get off to bad starts. But I think all of our guys are in a good enough place and understanding of where they are right now that it’s going to get you back on track a little quicker."

NOTES: Stearns said one player received a positive COVID-19 test Wednesday that turned out to be a false positive. Stearns said all the players on the roster re-tested today and that he expects the Brewers to have their full complement of players available Thursday. "It’s a reminder that we’re not really out of the woods yet with this whole COVID thing," Yelich said. "We need to take it on ourselves to be responsible and take the precautions that we need to." … Counsell said both outfielder Billy McKinney and right-handed reliever J.P. Feyereisen have made the major league roster. The 26-year-old McKinney, who was out of options, batted .262 with four homers and nine RBIs in 42 at-bats this spring. Feyereisen, 28, struck out 17 and allowed just one run and one hit in 9 2/3 innings.

With the state no longer under a public health emergency, Wisconsin could miss out on $49 million in monthly federal food assistance as soon as May 1.

The Milwaukee Police Department is asking for the public's assistance in locating a 61-year-old critical missing subject.