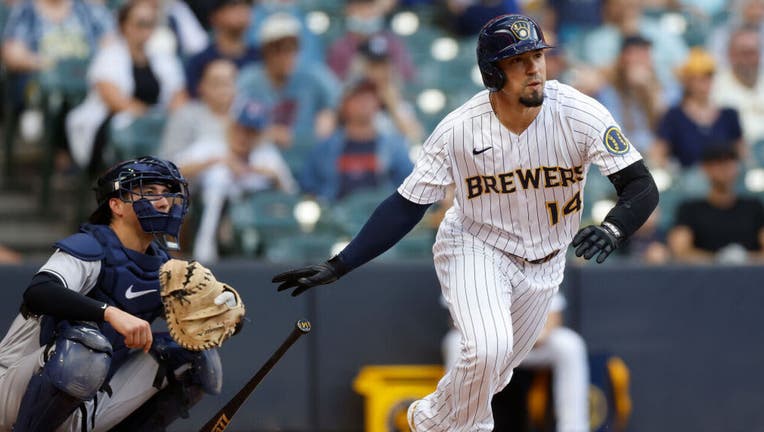 MILWAUKEE, WISCONSIN - SEPTEMBER 18: Jace Peterson #14 of the Milwaukee Brewers doubles in two runs in the ninth inning against the New York Yankees at American Family Field on September 18, 2022 in Milwaukee, Wisconsin. (Photo by John Fisher/Getty I

MILWAUKEE - Aaron Judge hit his 58th and 59th home runs of the season to move within two of Roger Maris’ American League record with 16 games remaining and lead the New York Yankees over the Milwaukee Brewers 12-8 on Sunday.

Judge added a two-run double in the ninth as part of a four-hit day for New York (88-58), which hit five homers and avoided a three-game sweep. The Yankees opened a 5 1/2-game lead over second-place Toronto in the AL East.

Seeking a Triple Crown, Judge leads the major leagues in homers and with 127 RBIs. His .3162 batting average is just behind AL leader Luis Arraez of Minnesota at .317 and Boston's Xander Bogaerts at .3164.

Judge’s homers totaled 857 feet. His first came on a sinker from Jason Alexander with a 2-0 count in the third inning. The 414-foot, opposite-field drive into the right field second deck left the bat at 112 mph.

Then in the seventh against Luis Perdomo, Judge pulled a slider with a 1-2 count for a 443-foot shot to left.

Judge also walked against Hoby Milner (3-3) leading off a four-run fifth as the Yankees went ahead to stay at 7-4.

Judge had not homered in his previous three games since going deep twice at Boston’s Fenway Park.

Philadelphia’s Kyle Schwarber is a distant second in the major leagues with 39 homers.

Anthony Rizzo homered in his return from the injured list, his 31st of the season, and had three hits. Aaron Hicks and rookie Oswaldo Cabrera also went deep as the Yankees overcame 3-0 and 4-1 deficits.

New York had 16 hits and twice hit back-to-home homers: Judge and Rizzo in the third, then Hicks and Judge in the seventh.

Gerrit Cole (12-7) gave up Kolten Wong’s three-run homer in the first and Tyrone Taylor’s solo shot in the second, Cole has allowed second-most in the majors and trailng only Washington’s Josiah Gray at 37.

Rowdy Tellez hit a two-run homer in the eighth off Clarke Schmidt. Milwaukee scored twice in the ninth and brought up the potential tying run with one out before Clay Holmes struck out Luis Urías and retired Keston Hiura on a groundout.