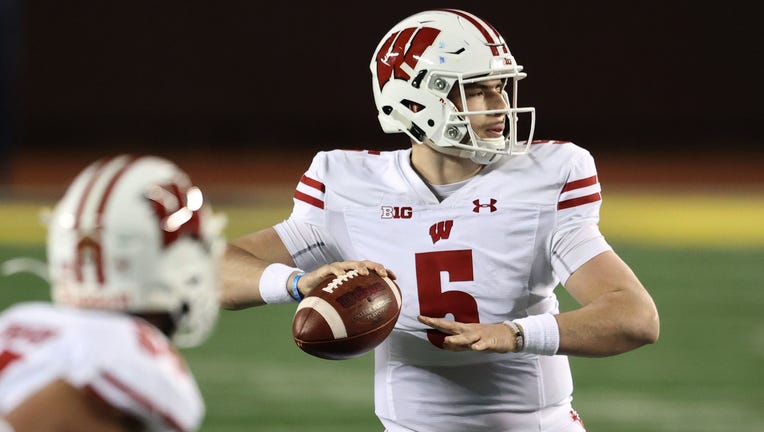 ANN ARBOR, MICHIGAN - NOVEMBER 14: Graham Mertz #5 of the Wisconsin Badgers throws a first half pass against the Michigan Wolverines at Michigan Stadium on November 14, 2020 in Ann Arbor, Michigan. (Photo by Gregory Shamus/Getty Images)

CHARLOTTE, N.C. - Graham Mertz will look to cement his grasp on Wisconsin’s starting quarterback job heading into next season and help the Badgers avoid their first losing season since 2001 on Wednesday against Wake Forest in the Duke’s Mayo Bowl.

The highly touted redshirt freshman started the season strong, completing 20 of 21 passes for 248 yards and a school record-tying five touchdowns passes in a 45-7 win over Illinois in his first start. He added two more TDs in a win over Michigan.

But he’s struggled since, throwing five interceptions and only one touchdown pass in his last four starts for Wisconsin (3-3).

"You want a good game going into the offseason, especially with everything going on," Mertz said. "You want to end it on a positive note."

The starting job next year would appear to be Mertz's to lose after Jack Coan, who helped the Badgers reach the Rose Bowl last season, put his name in the transfer portal. But Mertz still might have some competition from Chase Wolf, who replaced an injured Mertz against Minnesota.

One of the biggest issues is Mertz has been missing his top two wideouts – Danny Davis and Kendric Pryor. They are not expected to play again this week.

"They have a young quarterback who at some point will be one of the very best quarterbacks in the country," Wake Forest coach Dave Clausen said of Mertz.

Mertz said he's made a big step mentally and hopes that will carry over to next season.

"It’s just going to be continuing to just grow and (work on) footwork, timing and everything like that, nailing it down in the spring," Mertz said. "And once we get done with the season, I can take a step back and then do a cut-up of all my incompletions, all my completions and then try to map out my offseason training plan. So definitely, there’s always stuff to learn, always stuff that you’ve got to grow on and adapt. So it’ll be a really, really good offseason."

Celebrating the end of 2020: Some virtual events happening in our area

Molly Snyder of OnMilwaukee.com joins FOX6 WakeUp with some virtual events happening in our area.&nbsp;

Some other things to watch Wednesday between Wisconsin and Wake Forest:

Wake Forest (4-4) quarterback Sam Hartman, who played high school football in Charlotte, has had a solid season with 10 touchdown passes and one interception, but he will be facing a stiff test with the Badgers.

Wisconsin has the No. 1-ranked defense in the country, allowing just 263.5 yards per game. They are also tied with Rice, allowing the fewest offensive TDs (10) in the country.

"They are physical, they are big and they are stout," Clausen said.

Badgers freshman running back Jalen Berger will be back in the starting lineup after missing the last two games. Berger is listed as the team’s No. 1 running back on the depth chart and has practiced this week.

He faces a Wake Forest team that allows 191 yards rushing per game and 4.8 yards per carry.

Wake Forest defensive end Boogie Basham declared earlier this month to declare for the NFL draft and he won't play against Wisconsin, which is a big blow to the Demon Deacons' pass rush.

Basham appeared in 45 games during his four seasons at Wake Forest and tallied 173 total tackles, including 36 1/2 for a loss. He also had 20 1/2 sacks, which is the fourth most in program history.

Basham had 11 sacks this season, which was second in the ACC.

"He's a player who loves football and is somebody who already prepares like a pro," Clausen said.

Duke's Mayo Bowl tickets will not made available to the general public due to the coronavirus. Families and friends of the teams and bowl organizer will be the only spectators allowed in Bank of America Stadium.

The NFL's Carolina Panthers, who own the stadium, have been limited to 5,240 fans per game this season, per state rules.

"Our first priority when hosting the Duke’s Mayo Bowl is the safety of all participants, from the teams and coaches to the fans, staff and community," said Duke's Mayo Bowl executive director Danny Morrison.

Duke's Mayo takes over as the new sponsor, which has drawn some laughs around the country. The game was previously called the Belk Bowl, but Belk elected not to renew their contract. The bowl's Twitter site remains as witty as ever and is considered among the best in college football.

It's hard to decide who has been more dominant in men's college basketball this season: Gonzaga or the Big Ten Conference.