Leading by example can be one of the most effective styles of teaching, especially in a college setting. A local man sees his opportunity to do just that, even if those around him aren't even aware of the example he is setting.

MILWAUKEE - Leading by example can be one of the most effective styles of teaching, especially in a college setting.

A local man sees his opportunity to do just that, even if those around him aren't even aware of the example he is setting.

"I try to live life and not let people know that I do live with a challenge," said Heinzen. 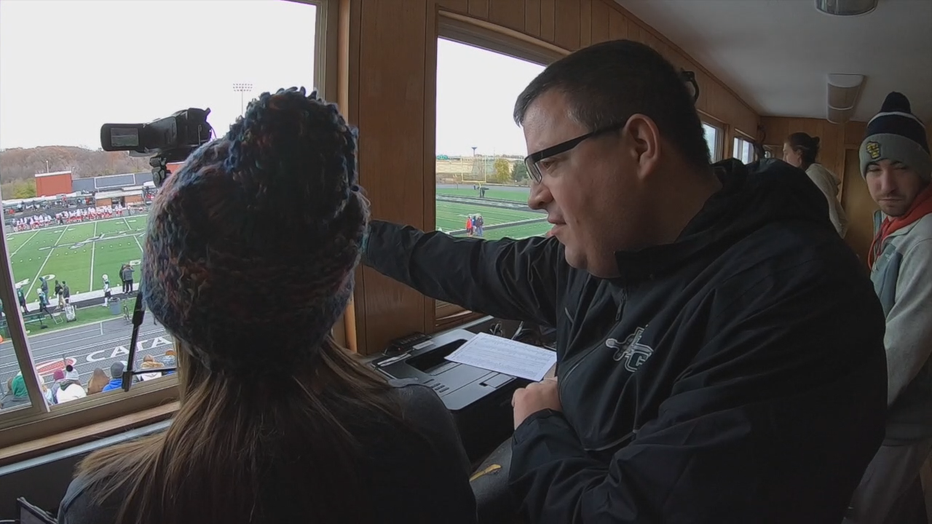 "I really don't think there is anything I can't overcome because of the challenges I do face," said Heinzen.

At a school the size of Wisconsin Lutheran, there's a lot of working together and leaning on each other.

The athletic department itself is similar to a team, with roles to play for everyone. It's a family.

Heinzen counts on his work family and is forever appreciative of his real-life loved ones.

"Huge," Heinzen said. "Family is important and I wouldn't be where I am without them."

Exactly where is Heinzen? He has a seat at the table to do what he absolutely loves, living his passion for athletics with a selfless approach. Even if he can't really see how all his work comes together.

"I am glad I am able to open up about this," said Heinzen. "This is the first time I have kind of told this publicly. I was diagnosed with childhood glaucoma, which basically means that the drainage system in my eyes did not develop as it should. So like I can't read jersey numbers usually on the court. Obviously getting to an away venue, that's a challenge that I have to overcome. With me not being able to drive there myself. Once you lose sight with glaucoma, you never get it back. It's not like I can go have Lasik and see 20/20 the next day, that's not how this works. I know things aren't going to get better, but for me, stability is a huge word."

Perhaps the greatest testament to Heinzen is that most Warriors and fans have no idea of his personal challenge.

Heinzen maintains hope of receiving an eye transplant to improve his sight, but that is not a viable option in the near future.

In the meantime, he vows to remain positive in his attitude and encouraging in his approach to student-athletes and others at Wisconsin Lutheran College.

President Joe Biden told a woman in a Green Bay Packers shirt to: "Tell that quarterback to get the vaccine" while Biden visited the site of the tornado devastation in Kentucky Wednesday.

Milwaukee Mayor Tom Barrett is one step closer to becoming the U.S. ambassador to Luxembourg. A Senate committee approved his nomination.

The Wisconsin DOJ said a former Rock County sheriff's deputy was arrested in Indiana and is charged with 10 counts related to child sexual assault.