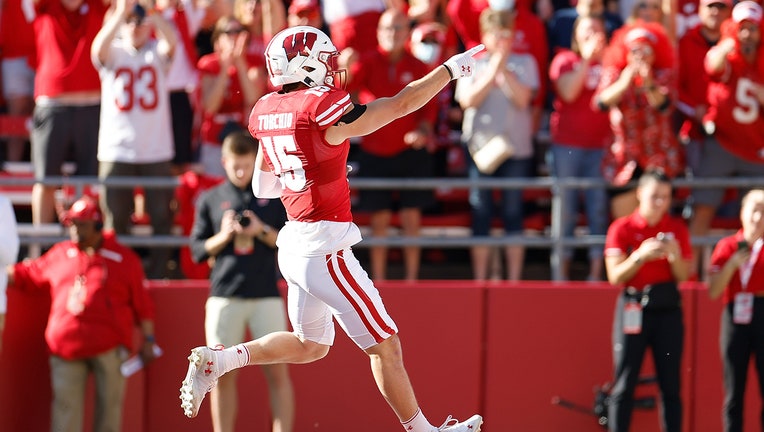 John Torchio scores on an interception return in the first quarter against the Purdue Boilermakers at Camp Randall Stadium on Oct. 22. (Photo by John Fisher/Getty Images)

John Torchio had two interceptions, including a 31-yard return for a touchdown for the Badgers (4-4, 2-3 Big Ten Conference), who rebounded from a 34-28 double overtime loss at Michigan State.

The game marked the first home win for Wisconsin interim coach Jim Leonhard, who took over for Paul Chryst on Oct. 2.

Allen, who surpassed 100 yards for the fifth time this season, went to the injury tent late in the third quarter with a left arm injury but returned in the fourth.

Mertz went 13 of 21 for 203 yards with two touchdowns for the Badgers, who have won 16 straight games against Purdue.

Purdue’s four-game winning streak was snapped and the Boilermakers (6-2, 3-2 Big Ten) fell one game behind Illinois for the lead in the Big Ten West standings.

The Badgers scored on their opening drive as Mertz threw a 29-yard touchdown strike to Skyler Bell.

Less than one minute later, Torchio picked off Aidan O’Connell and dashed 31 yards for a touchdown. The score increased Wisconsin's lead to 14-0. Mertz capped an 80-yard drive with a three-yard pass to Chimere Dike, and it was 21-0 after one quarter.

Allen's 14-yard touchdown made it 28-3 in the first minute of the second half.

The Boilermakers capitalized on a fumble to get a short field, scoring on an eight-yard pass from O'Connell to Payne Durham. But that was quickly negated with a 54-yard burst by Isaac Guerendo 90 seconds later.

Devin Mockobee ran for 108 yards and a touchdown for Purdue with O'Connell going 31 of 46 for 320 yards.

Purdue: The Boilermakers defense entered the game ranked 91st nationally with 248.4 yards per game. They gave up 378 yards, including 203 passing yards.

Wisconsin: The Badgers entered with a 79.2 percent success rate (19 of 24) in red-zone scoring, which ranked second in the league behind Ohio State. They were 1-of-1 on red-zone opportunities against Purdue.

Wisconsin was without the team’s sack leader and best pass rusher as outside linebacker Nick Herbig did not play. Badgers officials wouldn’t provide details except to say that Herbig was sidelined due to injury.