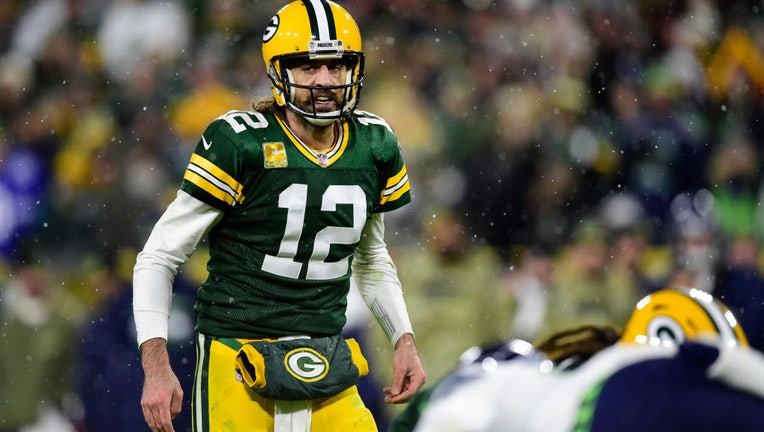 GREEN BAY, WISCONSIN - NOVEMBER 14: Aaron Rodgers #12 of the Green Bay Packers calls a play at the line of scrimmage against the Seattle Seahawks in the second half at Lambeau Field on November 14, 2021 in Green Bay, Wisconsin. (Photo by Patrick McDe

GREEN BAY, Wis. - Tony Romo was criticized on social media Sunday after seemingly defending Aaron Rodgers over the fallout from his vaccine status during CBS’ broadcast of the Green Bay Packers-Seattle Seahawks game.

The former Dallas Cowboys quarterback applauded Rodgers for taking "responsibility" over "misleading" fans about his vaccine status when he told reporters in August that he had been "immunized" against COVID-19.

"I’m glad he did that. I’m glad he took responsibility for that," Romo said, via Audacy.com. "I’m glad that he said that he misled people…and I think the biggest thing, you know it’s a polarizing issue, but I can promise you he felt the weight of it the last few weeks, it’s something that he’s not thinking about anything else, and it’s been, make no mistake, a very challenging week for him."

Rodgers tested positive for COVID-19 earlier this month and would miss 10 days as a result of not being vaccinated. During an initial appearance on "The Pat McAfee Show" he said he "didn’t lie in the initial press conference" and had been researching homeopathic alternatives to the vaccine. In a subsequent interview, he apologized for "misleading" people.

"I just wanted to start out the show by acknowledging that I made some comments that people might have felt were misleading. To anybody that felt misled by those comments, I take full responsibility for those comments."

But viewers weren’t pleased with Romo’s comments and took to social media to express that.

Rodgers returned in Week 10 for a 17-0 win over the Seahawks. After the game, he said he was thankful for the support he received during his absence.

Catcher Manny Piña has signed a two-year contract with the World Series champion Atlanta Braves – ending a six-year run with the Milwaukee Brewers.

Twice a runner-up at state, one Whitnall diver was committed to getting that gold before her final season came to an end.