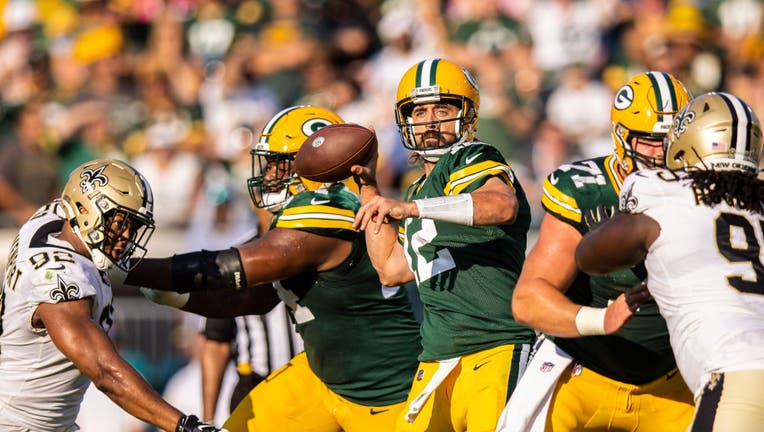 JACKSONVILLE, FLORIDA - SEPTEMBER 12: Aaron Rodgers #12 of the Green Bay Packers looks to pass during the second quarter of a game against the New Orleans Saints at TIAA Bank Field on September 12, 2021 in Jacksonville, Florida. (Photo by James Gilbe

GREEN BAY, Wis. - Former Green Bay Packers tight end Jermichael Finley had a bold suggestion for the organization should Aaron Rodgers continue to struggle for the rest of the season.

Rodgers struggled mightily against the New Orleans Saints in Week 1 after an offseason filled with drama and hemming and hawing about possibly retiring from the NFL. He was 15-for-28 with 133 passing yards and two interceptions in the team’s 38-3 loss.

Finley, who won a Super Bowl with Rodgers, suggested to TMZ Sports that the Packers give Rodgers a short leash and go with Love if by Week 4 the issues aren’t corrected. He said Rodgers looks "tired" and "probably" doesn’t want to play football at all.

"You’ve got one of the highest-paid backup quarterbacks sitting right behind Aaron Rodgers, so you might as well utilize him and get him going for the future," Finley told TMZ Sports on Friday.

Finley also predicted a down year for the Packers.

Rodgers made clear in the days leading up to his Week 2 matchup on Monday night against the Detroit Lions that he’s putting the struggles in Week 1 behind him.

"Look, we've won a lot of games around here. We've lost a few. But you move on. It doesn't matter if you play incredible and put up 50 or you get blown out. You move on to the next opponent," Rodgers told reporters Thursday, via the team’s website.

Brookfield Central golfer determined to help those in need