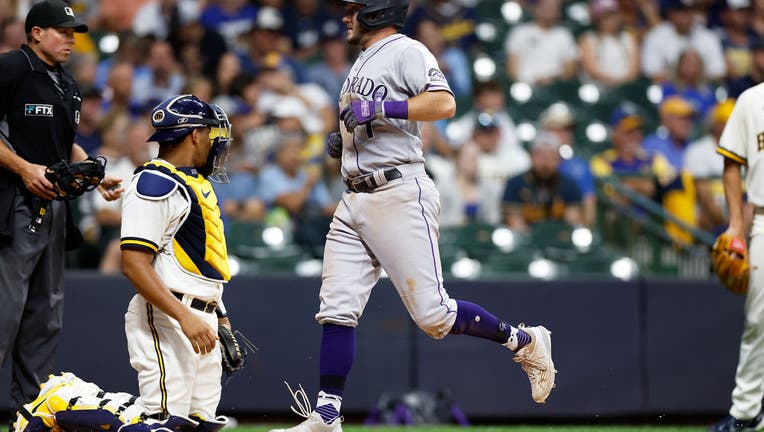 Garrett Hampson #1 of the Colorado Rockies crosses home plate on a sacrifice fly in the fifth inning against the Milwaukee Brewers at American Family Field on July 25, 2022, in Milwaukee, Wisconsin. (Photo by John Fisher/Getty Images)

MILWAUKEE - Kyle Freeland pitched four-hit ball over innings, Daniel Bard worked his way out of a bases-loaded jam in the ninth and the Colorado Rockies avoided a four-game sweep with a 2-0 victory over the Milwaukee Brewers on Monday night.

Elias Díaz continued his hot streak with a homer that helped the Rockies beat the Brewers for the first time in their last nine meetings. The Rockies had defeated the Brewers seven straight times before this stretch.

After failing to get a runner beyond first base through the first eight innings, the Brewers loaded the bases in the ninth against Bard.

Christian Yelich hit a leadoff single to start the rally. Willy Adames followed with a potential double-play grounder, but the Rockies failed to retire anyone as second baseman Brendan Rodgers bobbled the ball and threw late to first.

Bard retired Andrew McCutchen and Hunter Renfroe before walking Rowdy Tellez to move the tying run to second and put the potential winning run at first. Rodgers then snared Luis Urías' sinking liner to help Bard earn his 21st save in 23 opportunities.

The Brewers totaled 25 runs while winning the first three games of this series, but they had no answers for Freeland (5-7). The Rockies left-hander struck out seven and allowed one walk.

This marked a reversal of fortune for Freeland, who had posted an 8.44 ERA in his three previous July starts.

In his previous appearance, Freeland lasted four innings in an 8-5 victory over the San Diego Padres on July 14. After getting removed from that game, he grabbed a bat and struck the light on the dugout ceiling several times to shatter it before tossing the bat away.

Freeland needed to be virtually flawless to beat Aaron Ashby, who was making his first start since getting engaged and signing a five-year, $20.5 million contract with the Brewers.

The 24-year-old Ashby got engaged on July 18 during the All-Star break. He agreed to terms Saturday on his new contract, which runs through 2027 and includes club options for 2028 and 2029. The deal would be worth $41.5 million over seven seasons if those club options are exercised.

Ashby allowed a leadoff homer in the third inning to Díaz, whose 398-foot drive over the left-field wall came on an 0-1 slider. Díaz is 13 of 27 over his last six games and went 5 of 11 with five RBIs in this series.

Colorado extended its lead to 2-0 in the fifth. Garrett Hampson hit a leadoff single, stole second, advanced to third on Charlie Blackmon’s grounder to second and scored on Yonathan Daza’s sacrifice fly.