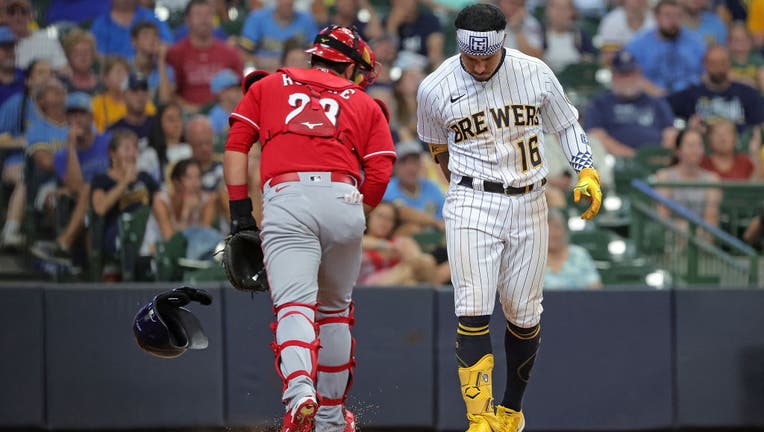 Kolten Wong #16 of the Milwaukee Brewers reacts to a strike out during the eighth inning against the Cincinnati Reds at American Family Field on Aug. 7, 2022, in Milwaukee, Wisconsin. (Photo by Stacy Revere/Getty Images)

MILWAUKEE - Donovan Solano had a sacrifice fly in the 10th inning and the Cincinnati Reds beat the Milwaukee Brewers 4-2 on Sunday.

Solano, who also had an RBI double in the eight, had an RBI flyball in the 10th off Devin Williams (2-2) as the Reds won for the eighth time in 10 games.

Willy Adames and Keston Hiura homered for the Brewers. Hiura's solo shot in the ninth tied the game.

Brewers starter Corbin Burnes went six innings and allowed just a run on two hits and a pair of walks while striking out nine. He didn’t allow a hit until Nick Senzel doubled with two outs in the fourth and his only run came an inning later on a two-out, solo home run by Reds catcher Michael Papierski.

Adames’ team-leading 22nd home run of the year accounted for the only run allowed by Reds starter Graham Ashcraft. The right-hander, filling a spot opened when Hunter Greene landed on the IL ahead of the series opener, scattered four hits and two walks while striking out three over 5 2/3 innings.

The two home runs were all either team had been able to muster heading into the eighth when Jonathan India reached on a pinch-hit single and scored on Solano’s hit.

Hiura, who homered Saturday night in his first start since returning from Triple-A Nashville led off the ninth with his 10th off the season off Hunter Strickland (3-3).

Ross Detwiler worked a perfect 10th for his seventh career save and his first since 2014.