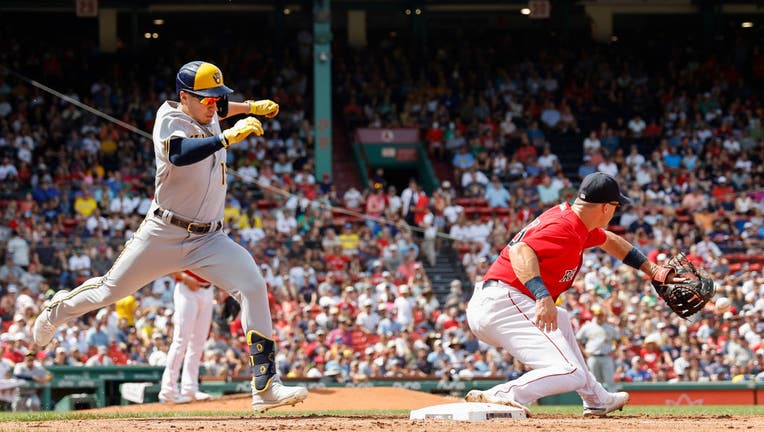 Tyrone Taylor #15 of the Milwaukee Brewers is out at first as Bobby Dalbec #29 of the Boston Red Sox gets the throw during the fifth inning at Fenway Park on July 31, 2022, in Boston, Massachusetts. (Photo By Winslow Townson/Getty Images)

BOSTON - Xander Bogaerts, J.D. Martinez and Christian Vázquez each had an RBI double that helped the slumping Red Sox beat the Milwaukee Brewers 7-2 Sunday for just their fourth victory in 17 games as the trade deadline approached.

Bogaerts, Martinez and Vázquez all are in what could be in their final season with the Red Sox. Bogaerts can opt out of his contract and the other two are eligible to become free agents.

Boston, which had a season-high eight doubles, was 3-7 on a season-long homestand and 8-19 in July.

Ex Red Sox outfielder Hunter Renfroe hit a two-run homer over the Green Monster for the second straight day and went 4 for 4 for NL Central-leading Milwaukee, which lost for only the second time in nine games since the All-Star break.

Trailing 2-0, Boston struck with five unearned runs in the fifth against Aaron Ashby (2-9) on consecutive two-out RBI doubles by Bogaerts, Martinez, Vázquez and Alex Verdugo. Bogaerts drove in two runs with a drive down the left-field line. Verdugo’s hit was off Hoby Milner.

The Red Sox added two more runs in the sixth when Jackie Bradley Jr. had an RBI double and scored on Jaylin Davis’ single.

Renfroe hit his 19th homer. He hit 31 last year in his only season with Boston and was dealt to the Brewers in November.