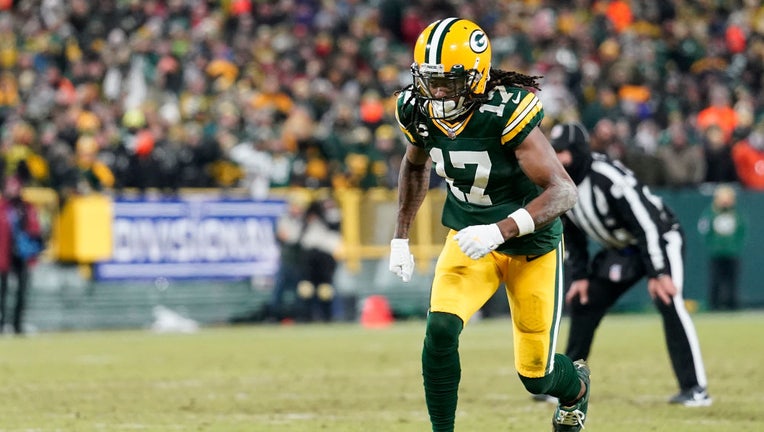 LAS VEGAS - The Las Vegas Raiders have finalized their trade for All-Pro receiver Davante Adams, giving quarterback Derek Carr the top wideout that had been missing from the offense.

The deal was agreed to on Thursday and announced Friday with the Raiders sending the Packers first and second-round picks in this year's draft for the game's most productive receiver.

The trade materialized when the Packers were unable to sign Adams to a long-term deal after using the franchise tag on him. Adams will sign a five-year contract with the Raiders worth a reported $141.25 million, making him the highest-paid receiver in the NFL.

"It’s never easy moving on from a player and person the caliber of Davante Adams," Packers general manager Brian Gutekunst said in a statement. "We have so much respect for all that Davante gave on and off the field during his eight seasons in Green Bay as he was integral to all that we’ve accomplished. He is undoubtedly one of the greatest players in the storied history of the Packers and we look forward to him being enshrined into the Packers Hall of Fame one day."

Raiders first-year coach Josh McDaniels and new general manager Dave Ziegler are counting on this addition to help the team build on last season's playoff berth and compete in the ultra-tough AFC West.

Las Vegas had been seeking a top wideout ever since Henry Ruggs III was released last season after he was charged with DUI in a fatal crash that killed a woman and her dog.

The Raiders ended up with one of the best in Adams, giving them a dynamic set of playmakers around Carr with Pro Bowl slot receiver Hunter Renfrow, star tight end Darren Waller and running back Josh Jacobs.

Carr has a strong history with Adams, playing two seasons together in college at Fresno State. In their final year together in 2013, Adams had 131 catches for 1,719 yards and 24 TDs.

Adams has been one of the most productive receivers in the NFL in recent years. His 432 catches, 5,310 yards receiving and 47 TD receptions lead the NFL over the past four seasons.

He had 123 catches for 1,553 yards and 11 TDs last season when he made his second straight All-Pro team.

The 29-year-old Adams is the only player in NFL history to have at least 110 catches, 1,350 yards receiving and 11 touchdown receptions in three separate seasons.

Adams has joined Marvin Harrison and Larry Fitzgerald as the only players to have 600 catches, 8,000 yards receiving and 70 touchdown receptions over their first eight seasons.

His departure leaves a major hole in Green Bay’s offense. The Packers have their MVP quarterback, but must figure out who’s going to catch Rodgers’ passes.

The Packers return veteran Randall Cobb, but aren’t certain to bring back any of their other proven wideouts.

NOTES: The Raiders also signed RB Ameer Abdullah to a one-year deal. Abdullah has played seven seasons in the NFL for Detroit, Minnesota and Carolina. He has rushed for 1,574 yards with six touchdowns, averaging 3.8 yards per carry in 91 games. He also has 119 receptions for 865 yards and 17 TDs.

There are plenty of employment opportunities for the upcoming season at American Family Field. A range of positions are available in food service, parking operations and cleaning services.