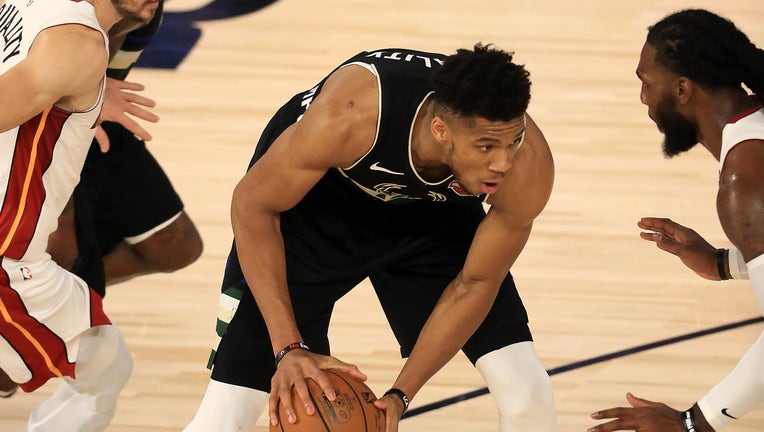 MILWAUKEE - Bucks star Giannis Antetokounmpo acknowledges the incentive that comes from opening the postseason against the Miami Heat, who eliminated Milwaukee in the second round last year.

"Obviously everybody on the team has a little bit of extra motivation," the reigning two-time MVP said.

Miami beat the top-seeded Bucks 4-1 and went on to win the Eastern Conference title last year before losing to the Los Angeles Lakers in the NBA Finals. Miami is seeded sixth and Milwaukee third in the East heading into the rematch that begins Saturday.

"Totally different," Heat coach Erik Spoelstra said. "The year is different. Both teams are different. ... It’s just a totally new challenge. We feel grateful that we have this opportunity to be in the playoffs and compete against them. They’re a great team."

The Bucks had the NBA’s best regular-season record in 2018-19 and 2019-20, but they blew a 2-0 lead to Toronto in the Eastern Conference finals in 2019. Those two early exits turn up the pressure on a franchise seeking its first NBA title since 1971.

"I believe that pressure is earned," said Antetokounmpo, who injured his ankle early in Game 4 and didn’t play the rest of last year’s Heat series. "If I wasn’t who I am today and I didn’t work as hard as I work and I didn’t focus on the game, I didn’t love the game and I didn’t compete the way I am, we wouldn’t be talking about pressure. Pressure is earned, and I love it."

The Bucks responded to last year’s exit by rearranging the pieces complementing Antetokounmpo and two-time All-Star forward Khris Middleton. The most notable addition was Jrue Holiday, who averaged 19 points and shot 11 of 21 from 3-point range against the Heat during the regular season.

Milwaukee won two of its three regular-season meetings with Miami, but Heat star Jimmy Butler didn't play in any of them and two of those games took place in December. Butler averaged 23.4 points, 5.8 rebounds and 4.4 assists in last year’s Heat-Bucks series.

He's ready to try knocking out the Bucks once again.

"You don’t hold anything back," Butler said. "You leave it all out there. Best time of year for it."

The Milwaukee Bucks are, hopefully, cooking up a playoff run, and the Mecca Sports Bar & Grill has the food to keep the fans going.

Limited tickets for all first-round playoff games at Fiserv Forum are still available, the Bucks said – including Game 1 and Game 2. Tickets are available at bucks.com/tickets and in the Bucks mobile app.

The remaining three games of the series, should they be needed, will be played on the following dates – times to be determined.

The Deer District will be welcoming fans at the plaza, the Mecca Sports Bar & Grill, and the beer garden. There is a 3,500 person capacity limit for the plaza, to ensure enough space for social distancing. Masks will be required except when actively eating or drinking. Good City Brewing and Drink Wisconsinbly will also be open.

What to watch for

Both teams have made notable changes since their last playoff meeting

Only five of the 11 guys who played at least a minute for the Bucks in last year’s Heat series remain on the roster: Antetokounmpo, Middleton, Brook Lopez, Donte DiVincenzo and Pat Connaughton.

Miami no longer has Jae Crowder, who averaged 15.2 points and shot 22 of 51 from 3-point range against the Bucks in last year’s playoffs.

The Heat were 7-14 early in the season and 22-24 and stuck at .500 in mid-April. But they enter the playoffs on a tear after winning 12 of their last 16 regular-season games. Milwaukee had won eight of nine games before closing the regular season with a 118-112 loss at Chicago in which it rested all its starters.

Very few teams do a better job defensively against Antetokounmpo than the Heat.

Antetokounmpo averages 18.6 points on 50.4% shooting in regular-season and playoff games against Miami. Only one team (Golden State, 18.4) holds him to a lower scoring average.

Miami holds a 17-14 series edge over the Bucks in games in which Antetokounmpo played.

There is no opening round series that pits coaches who have gone head-to-head more often than this one between Milwaukee’s Mike Budenholzer and Spoelstra. They’ve coached against each other 35 times, including playoffs. Spoelstra has an 18-17 edge.

The Denver-Portland series also has coaches that have opposed one other on 35 previous occasions. The Nuggets’ Michael Malone holds an 18-17 edge over the Blazers’ Terry Stotts.

The Bucks acquired P.J. Tucker and the Heat added Trevor Ariza in March and both bring a wealth of playoff experience.

That’s not all they have in common. The 36-year-old Tucker and 35-year-old Ariza played together for the 2017-18 Houston Rockets team that went 65-17 and took Golden State to seven games in the West finals.

"He’s one of my best friends, in the league or outside the league," Tucker said.