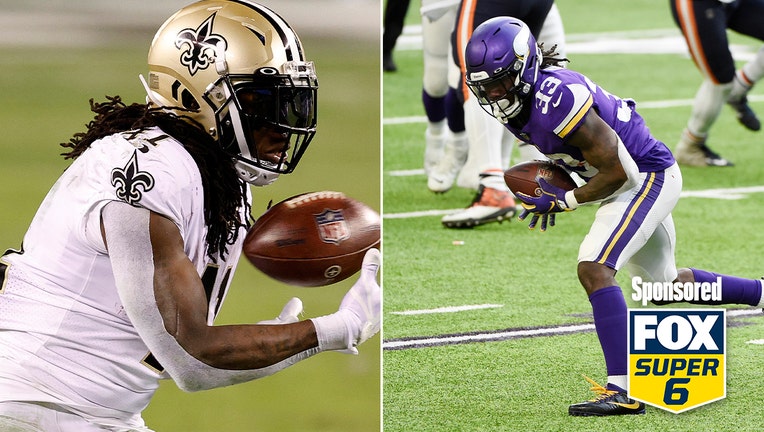 LEFT: Alvin Kamara #41 of the New Orleans Saints makes a reception against the Philadelphia Eagles at Lincoln Financial Field on December 13, 2020 in Philadelphia, Pennsylvania. (Photo by Tim Nwachukwu/Getty Images) RIGHT:Dalvin Cook #33 of the Minne

The Minnesota Vikings are hoping that they won’t find a lump of playoff coal in their stockings. The New Orleans Saints hope that their ultimate gift – a trip to Tampa Bay for Super Bowl LV- is about a month away from being delivered.

When the two get together at the Mercedes Benz Superdome on Friday afternoon in an NFL Christmas Day special (4:30 p.m., FOX), you can have a very Happy Holiday season as well.

And being able to predict the big events of this game could help you win $25,000 in FOX’s Super 6 contest.  Just download the free app, answer six questions correctly and you could win up to $25,000 while football with the family on Christmas Day. Could anything really be better than that? Here’s the questions and how to look at it

Both teams offenses were sluggish on Sunday. In the Vikings 33-27 loss to the Bears on Sunday, Minnesota scored 10 point but had real trouble moving the football and keeping the Chicago offense off the field. The rustiness of Drew Brees was evident on the first four possession of the game- three punts and an interception against the Kansas City defense before a touchdown drive that ended with a Tayson Hill rushing score to break the ice. One thing to keep in mind: New Orleans defense was on the field for a team record 92 snaps on Sunday with a quick turnaround for a short week.

If you believe that the last scoring drive is going to be a field goal, the Saints are a pretty good bet on that one. Dan Bailey’s struggles for Minnesota two weeks ago in Tampa Bay are well documented and the Vikings seemed to always have a kicking issue. Will Lutz, meanwhile, is one of the better kickers in the game and is 20-for-25 on field goals, including 13-of-14 inside the Superdome. In that case, something likely in the high 30s or low 40s seems to make sense.

Choose the team with the most receptions and how many?
Vikings and Saints with ranges from 0 to 25+

With Michael Thomas out for the remainder of the regular season and Brees’ still trying to scrape some rust off after three missed games with broken ribs, don’t be surprised if the Saints play more of a rushing type game with Alvin Kamara. With Adam Theilen and Justin Jefferson on the outside, Kirk Cousins could be forced to air it out.

Choose the team with the most rushing yards and how many?
Vikings and Saints with nine ranges from 0 to 136 yards

We mentioned that Kamara is a big presence for the Saints, but it’s important to know that a lot of him damage can be done with short swing passes. Dalvin Cook is a big time threat at the running back spot for Minnesota. The Vikings averaged 147 yards per game on the ground and Cook is the biggest reason why that happens. New Orleans is averaging 131.8 yards on the ground per game.

Because Brees is a Hall of Famer, it is fair to believe that the Saints are lighting up the scoreboard with his arm. That’s not completely true- New Orleans is only 22nd in the NFL in receiving yards with an average of 244.6. Minnesota is slightly better- ranking 16th at 254.9 yards receiving per game. On defense, however, the Saints are strong and have allowed only 210 per game.

There’s a lot of factors here and almost point towards New Orleans. Five of the last six home teams playing on Christmas Day have won. Road teams tend to wilt if they are away from home on the holiday. The Saints haven’t lost three in a row since the first three games of the 2016 season. The Vikings saw its best path to the playoffs vaporized at home to Mitchell Trubisky and the Bears. And the Saints really need to win and get their veterans rest a week before the playoffs start.  Add that all together and it certainly points to New Orleans.