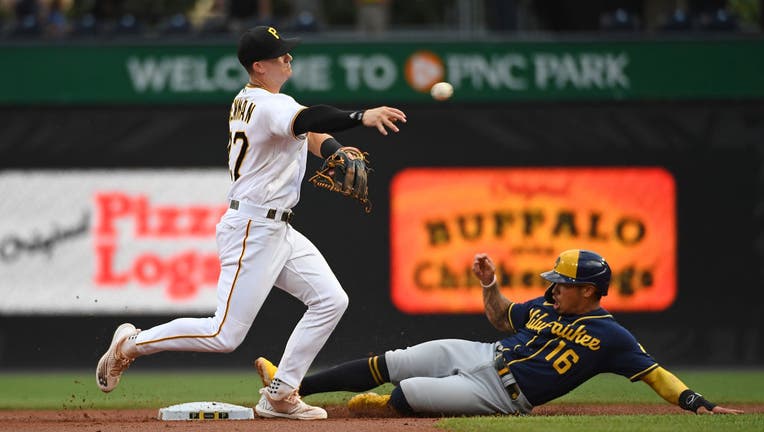 Kevin Newman #27 of the Pittsburgh Pirates attempts to turn a double play against Kolten Wong #16 of the Milwaukee Brewers in the second inning during the game at PNC Park on August 2, 2022, in Pittsburgh, Pennsylvania. (Photo by Justin Berl/Getty Im

PITTSBURGH - Rookie Oneil Cruz hit a three-run homer to spark a five-run sixth inning as the Pittsburgh Pirates rallied for a 5-3 victory over the NL Central-leading Milwaukee Brewers on Tuesday night, snapping a seven-game skid.

Cruz hit a blast to dead center field off reigning NL Cy Young Award winner Corbin Burnes, pulling the Pirates into a 3-all tie. Pittsburgh then added two runs to win for the first time since July 23.

The Brewers had their four-game winning streak snapped, one day after trading All-Star closer Josh Hader to San Diego. Milwaukee had also won seven of eight.

Pittsburgh managed just four hits, but Burnes (8-5) walked five in 5 1/3 innings as his five-game winning streak ended. Burnes was charged with four runs and struck out six to raise his NL-leading total to 166.

Milwaukee got all of its runs on solo home runs in the sixth inning off Pirates starter Bryse Wilson. Willy Adames and Rowdy Tellez hit back-to-back shots – the 21st of the season for each – to lead off the inning and snap a scoreless tie then Kolten Wong connected with one out.

Wong’s homer chased Wilson, who was charged with three runs on six hits in 5 1/3 innings while striking out two and walking one.

Wong went 3 for 3 before being lifted for a pinch-hitter. He made a critical error in the decisive sixth inning. Adames and Tellez had two hits each.

After Cruz’s homer drew the Pirates even, Josh VanMeter walked and Brad Boxberger relieved Burnes. VanMeter stole second and scored on a single by Tyler Heineman, who advanced to third on Wong’s throwing error. Wong tried to catch Heineman rounding first base.

Colin Holderman (5-0) pitched one scoreless inning after being recalled from Triple-A Indianapolis earlier in the day. The rookie was making his Pirates’ debut after being acquired from the New York Mets on July 22 for designated hitter Daniel Vogelbach.

Wil Crowe pitched a scoreless ninth for his third save.