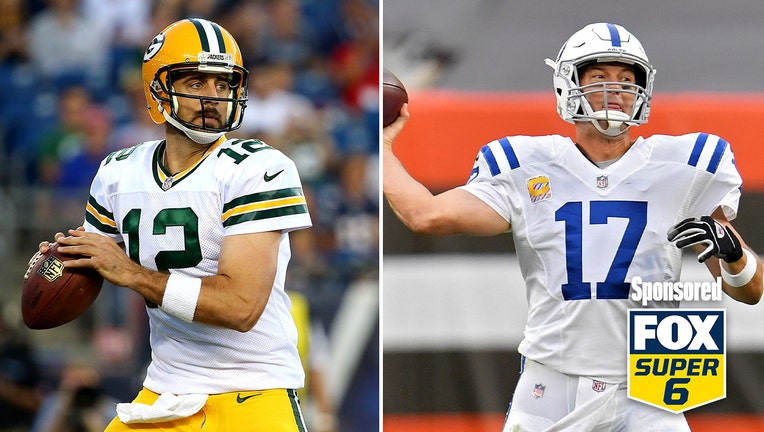 LEFT: Aaron Rodgers #12 of the Green Bay Packers drops back to pass in the first quarter against the New England Patriots during a preseason game at Gillette Stadium on August 13, 2015 in Foxboro, Massachusetts. (Photo by Maddie Meyer/Getty Images) R

The week before Thanksgiving gives you another chance to become a millionaire with FOX Super 6.

Nobody picked a winner of all six games of FOX’s Super 6 contest, meaning a rollover for another week of the $1 million jackpot. Even if you don’t match every one, you could end up winning the $50,000 guaranteed jackpot

How do you win? Well, just pick the winners and the margins of victory of the six games listed on the FOX Super 6 app. Get them all right and you will take home part of the grand prize jackpot of $1 million. (The jackpot will be split among all those who get every game and margin of victory correct.)

The best part of all is it’s free. To play, all you have to do is go to the FOX Super 6 app on your phone or tablet device. When you click on the app, you will see the entry for the NFL Sunday Challenge. Just go onto the app, swipe for the team that you think will win and the margin of victory.

Here’s the six games to pick for this coming week.

Life without Drew Brees for the time being begins for the Saints as the starting quarterback deals with broken ribs and a punctured lung. Remember that New Orleans went 5-0 last year when Brees missed time with an injury with Teddy Bridgewater as his backup. This time, it’s Jameis Winston who will get the start with a lot of Tayson Hill likely. Meanwhile, Atlanta has won three of its last four after the disastrous start that caused the firing of Dan Quinn as head coach. Matt Ryan has thrown for 2,756 yards and 15 touchdowns despite the issues the Falcons have experienced.

Can Atlanta  pull the upset? Make your pick on the FOX Super 6 for free and it could lead to $1 million

The Lions blew a big lead and lived to tell about it last week, squandering a 21 point to Washington before prevailing at the horn with a 59-yard Matt Prater field goal. They can reach .500 this late in the season for the first time since being 6-4 in 2017. Matthew Stafford played well with three touchdown passes while D’Andre Swift is starting to look the role of a premier running back. Meanwhile, Carolina has issues with Teddy Bridgewater leaving with a knee injury, Christian McCaffrey questionable with a shoulder injury and a five game losing streak that has taken the starch out of a good start to the season for the Panthers.

Who wins this NFC  matchup? With FOX Super 6, you could pick the winner of six NFL games and take a crack at $1 million. Download the app today.

Cleveland is tied with Baltimore for second place in the AFC North behind the undefeated Steelers after a 10-7 grind-it-out victory over the Texans on Sunday. Getting Nick Chubb back was huge for Cleveland as the running back rushed for 126 yards and a touchdown. Meanwhile, the Eagles are approaching disaster territory after losing to the Giants last week in an uninspiring 27-17 effort. Philadelphia has five straight games against teams who would make the playoffs if they started today- at Cleveland, Seattle, at Green Bay, New Orleans and at Arizona- before a relative salvation of two NFC East games to wrap up returns. Unless things get together quickly, it may come too late for Carson Wentz and company
.
With FOX Super 6, you can pick the winner and take a shot at potentially $50,000 in prizes while playing for free. Download the Super 6 app on App Store or Google Play.

Almost the Opposite Bowl as the best in the NFL, Steelers head to north Florida to face the next-to-last Jaguars, who trail the Jets in the race for Trevor Lawrence and the No. 1 pick. That being said, Jacksonville threw a scare into the Green Bay Packers at Lambeau on Sunday before falling 27-24. James Robinson rushed for 109 yards while Jake Luton threw a touchdown pass in frigid Wisconsin. Meanwhile, the Steelers rolled over the Bengals and were clicking on all cylinders offensively with Ben Roethlisberger throwing four touchdown passes and the Pittsburgh defense forcing two turnovers and three sacks.

With FOX Super 6, you can bet and take a shot at great prizes. If you win all six games, you can win a million dollars. Download the app at the App Store or Google Play.

A rematch of the Titans’ stunning 28-12 win in the AFC Divisional Playoffs in Baltimore last year featured two teams in the mess of the AFC playoff picture that features six teams at 6-3 with only the potential likelihood of only three of them making the tournament. Both are coming off disappointing losses- the Titans were blitzed by the Colts 34-17 at home last week, the Ravens were swept up in the rain during a 23-17 loss at New England Sunday night. The key could be which quarterback gets back on track. Ryan Tannehill threw for only 147 yards against the Colts defense while Lamar Jackson had a relatively quick 249 against the Patriots.

It’s a big game for both teams and it could be a huge game for you on the FOX Super 6 app. If you pick that game and five others correctly, you could win $1 million. It’s free to play, so download today at the App Store or Google Play.

The Packers are now in control of home field advantage in the NFC with the Seahawks slide, but they haven’t exactly been impressive. Aaron Rodgers had a 325 yard performance with three touchdowns- one running, two passing- but there were two more Packers turnovers and the running game sputtered with Aaron Jones only totaling 48 yards. Meanwhile, the Colts seemed reborn last Thursday night in Tennessee during a 34-17 victory over the Titans. Philip Rivers turned back the hands of time with a 308 yard performance that was backed up by Nyheim Hines’ two touchdown performance out of the backfield. Indianapolis’ strength, however, is its defense, which is allowing only 19.7 points a game and just over 100 yards on the ground.

With FOX Super 6, you can bet this game and take a chance at $1 million if you can pick all six games right. Download the free app today.