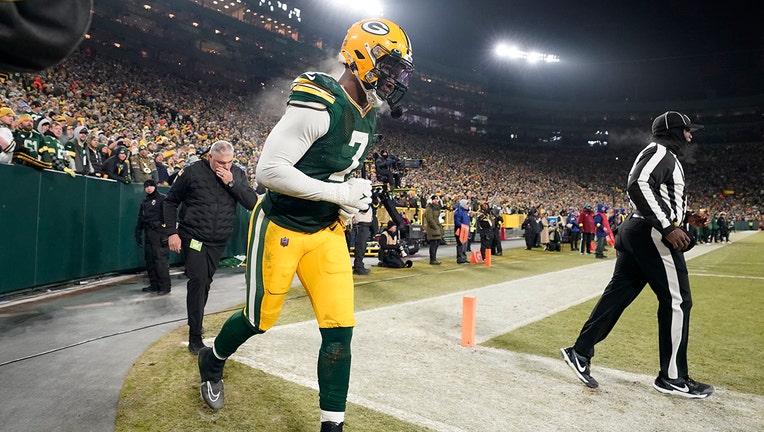 Quay Walker leaves the field after being disqualified for an unsportsmanlike penalty against the Detroit Lions on Jan. 8. (Photo by Patrick McDermott/Getty Images)

GREEN BAY, Wis. - Green Bay Packers linebacker Quay Walker was fined $13,261 by the NFL for the shove that led to his ejection from a 20-16 loss to the Detroit Lions last Sunday, a person familiar with the situation said.

The person also said Saturday that Packers cornerback Rasul Douglas was fined $11,139 for his unsportsmanlike-conduct penalty in that game and Lions running back Jamaal Williams was fined $18,566 for his two touchdown celebrations. Williams wasn’t penalized during the game for either celebration dance.

The person spoke to The Associated Press on the condition of anonymity because the fines hadn't been announced.

Walker was ejected during Detroit’s go-ahead touchdown drive midway through the fourth quarter of the Packers' loss. He was close behind two Lions staffers as they attended to Detroit running back D’Andre Swift, Walker’s former Georgia teammate.

Lions team physician Sean Lynch put his left hand on Walker’s right elbow to move him away from the staffers so he could check on Swift. Walker then shoved Lynch in the back.

It was Walker's second ejection during the first-round draft pick's rookie season. He was tossed from an Oct. 30 loss at Buffalo after shoving Bills practice squad tight end Zach Davidson on the sideline.

Walker apologized Monday and said he had spoken directly to Lynch to express his regret.

"Another rookie mistake," Walker said Monday. "Selfish. Just a selfish act of me. Very, just very stupid and dumb. I’ll say immature of me. Once again, made the same mistake twice. I just always seem to overreact at times and I did it again last night. That was pretty much it."

Money collected from fines goes to programs for former NFL players in need.