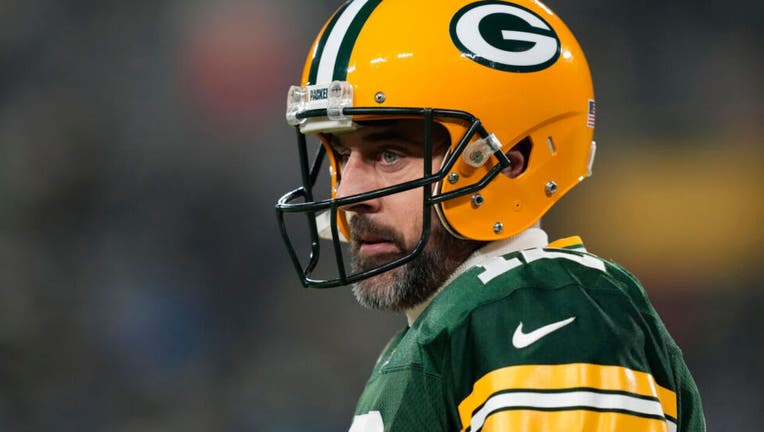 Aaron Rodgers #12 of the Green Bay Packers warms up prior to the game against the Detroit Lions at Lambeau Field on Jan. 8, 2023, in Green Bay, Wisconsin. (Photo by Patrick McDermott/Getty Images)

GREEN BAY, Wis. - Aaron Rodgers threw a late interception and the Green Bay Packers lost 20-16 to the Detroit Lions on Sunday night to fall short of the playoffs.

After winning four straight games and receiving plenty of help from other teams, the Packers had control of their postseason fate heading into the final game of the NFL regular season. But they fell short against the Lions, who had been eliminated from the playoffs earlier Sunday when the Seattle Seahawks beat the Los Angeles Rams 19-16 in overtime.

Seattle (9-8) instead earned the NFC’s final playoff spot and will play at San Francisco (13-4) in the opening round. The Packers (8-9) missed the playoffs for the first time in Matt LaFleur's four seasons as coach.

Rodgers went 17 of 27 for 205 yards with one touchdown and the crucial pick on the final pass of what was perhaps the four-time MVP’s final game at Lambeau Field. The 39-year-old Rodgers has said he doesn’t know whether he plans to continue playing next season.

During the game, Rodgers became the eighth NFL player to have at least 5,000 career completions.

Jamaal Williams’ second 1-yard touchdown run of the night against his former team put the Lions (9-8) ahead with 5:55 remaining. Williams had 17 touchdown runs to break the Lions’ single-season record that Barry Sanders had set in 1991.

Green Bay only got as far as its own 33 on its next series before Kerby Joseph picked off Rodgers' deep throw on third-and-10 with 3 1/2 minutes left. Detroit held onto the ball for the remainder of the game.

As play began Sunday night at Lambeau Field, the Detroit Lions won the coin toss and elected to defer. The Packers' offense was up first.

Green Bay failed to convert a touchdown. Mason Crosby was good from 22 yards to put the Packers up 3-0 early in the first. It was his 15th consecutive successful FG.

The Packers' defense started with a three and out, eventually forcing a field goal after Green Bay's Darnell Savage broke up Lions' QB Jared Goff's pass. The game was tied at 3 with 7 minutes to play in the first quarter.

After Packers' QB Aaron Rodgers was sacked, Crosby's second field goal of the game was good from 49 yards. Green Bay was back in the lead, 6-3.

The Lions' offense went three and out again after Packers Coach Matt LaFleur challenged a first down by Lions' Amon-Ra St. Brown and won. It was ruled not to be a catch.

The Packers led 6-3 at the end of the first quarter.

It was soon déjà vu for the Packers. Rodgers was sacked again, and Crosby was good from 48 yards; his third successful field goal this game. Green Bay led 9-3 with about 13 minutes left in the first half.

The Lions celebrated a touchdown, but it was called back due to holding by Detroit.

The Packers' defense held Detroit to a field goal attempt which was no good.

Detroit's Michael Badgley was good from 33 yards after a Rasul Douglas personal foul, and the Packers led 9-6 at the half.

The Packers' defense forced a three and out to start the second half.

A Mason Crosby field goal attempt from 53 yards was no good.

The Lions took the lead with a Jamaal Williams touchdown, putting Detroit up 13-9 with about 8 minutes left in the third.

The Packers were finally able to score a red zone touchdown vs. the Lions with an Allen Lazard 13-yard touchdown catch. Green Bay took the lead once again, 16-13.

After that, the Packers' defense forced a three and out.

Aaron Rodgers was picked off by Kerby Joseph, but the Packers got lucky because a Detroit penalty wiped that out.

In the fourth, Packers' Quay Walker was disqualified by an unsportsmanlike conduct penalty. He was forced to the locker room for the rest of the game.

Another Jamaal Williams' touchdown put the Lions up 20-16.

With less than 6 minutes to play, Rodgers was picked off.

The final score was 20-16 Detroit, and the Packers' season came to an end.