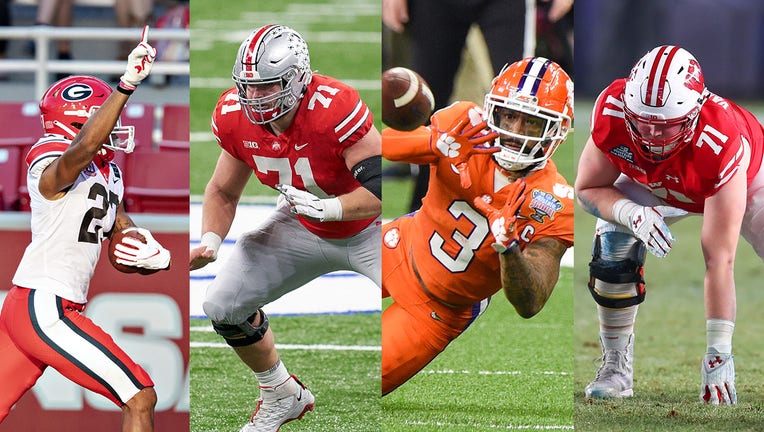 MILWAUKEE - The Green Bay Packers added nine players in the 2021 NFL draft, which ended Saturday, May 1.

Soon to rep the Green & Gold: four defenders, three offensive linemen, a receiver and a running back. Here's a review of this year's draft class:

The Packers made Stokes their first draft choice, 29th overall, on Friday night.

Stokes played 36 games over three seasons for the Bulldogs. He had four interceptions in his college career and was named first-team All-Sec in 2020.

He is the third cornerback drafted by the Packers in round one since 2005. Most recently, the team selected Jaire Alexander in the first round of 2018.

The team addressed the offensive line with Myers, who plays both guard and center, with the 62nd overall pick.

After losing starting center Corey Linsley, also an Ohio State alumnus, in free agency, the Packers went back to the Buckeyes in search of a replacement.

The team later acquired the 85th overall pick in a trade with the Tennessee Titans, selecting Rodgers.

Rodgers played four seasons for the Tigers, amassing 2,144 receiving yards and 15 touchdowns. He posted a 1,000-yard season in his final campaign.

Green Bay drafted another offensive lineman, Mississippi's Royce Newman, in the fourth round on Saturday.

Newman played 42 games over four seasons with Ole Miss, including double-digit games played in each of his final three seasons.

In the fifth round, the team went defense, selecting Slaton.

Slaton records a career-high 37 tackles in his final season with the Gators. In three years, he played in 34 games, amassing 87 total tackles and 3.5 sacks.

It was back-to-back picks on defense as the team brought in Jean-Charles.

Jean-Charles played four seasons at App State. He competed in at least 11 games all four years and collected 97 tackles and two interceptions.

Van Lanen was the third offensive lineman picked by the Packers and the seventh player in the draft class.

The Green Bay native played 45 games in four seasons with the Badgers.

McDuffie made 107 tackles in his final collegiate season. He also had an interception and forced a fumble.

The team rounded out its 2021 draft class with Hill in the seventh and final round.

As in any draft year, a wave of undrafted players signed with NFL teams after the final pick.

For the Packers, that meant adding another Badgers offensive lineman and Wisconsin native.

Jon Dietzen signed with Green Bay after the draft. He played 42 games in four seasons at Wisconsin.

The Green Bay Packers drafted offensive lineman Josh Myers in the second round, 62nd overall, of the 2021 NFL draft on Friday, April 30.

UW-Whitewater's Quinn Meinerz was drafted by the Denver Broncos in the third round, 98th overall, of the 2021 NFL draft on Friday, April 30.