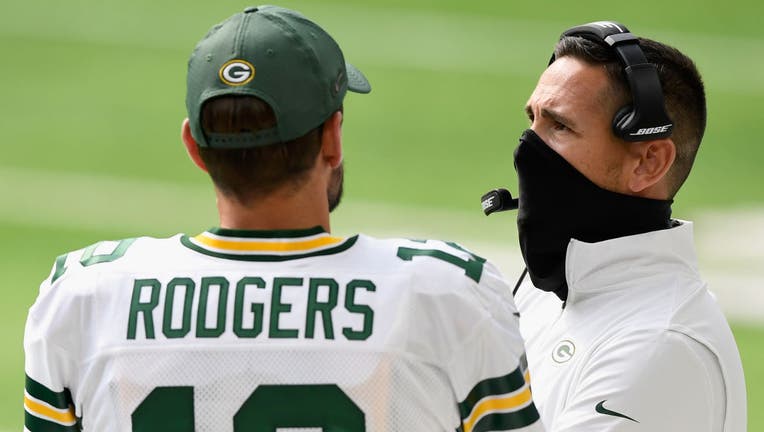 Aaron Rodgers #12 of the Green Bay Packers speaks with head coach Matt LaFleur during the fourth quarter of the game against the Minnesota Vikings at U.S. Bank Stadium on September 13, 2020 in Minneapolis, Minnesota. (Photo by Hannah Foslien/Getty Im

GREEN BAY, Wis. - Green Bay Packers quarterback Aaron Rodgers spoke out for the first time regarding his issues with the team’s front office during an appearance on ESPN’s "SportsCenter" in longtime anchor Kenny Mayne’s final show on Monday night.

Rodgers talked about his love for his teammates, including recently drafted quarterback Jordan Love, as well as the coaching staff and Packers fans, but he made it clear in a philosophical point that organizations are built "by the people."

Rodgers also confirmed that he did not attend Monday’s organized team activities.

Packers head coach Matt LaFleur spoke to reporters on Tuesday. He was asked about Rodgers’ recent comments and he talked about what it will take to keep Rodgers in a Packers uniform.

"I just want to keep it about the guys that are here right now," LaFleur said via ESPN.com. "We’re just going to continue to try to work through this and hopefully we can get him back in the building."

Green Bay has made it clear that it has no intentions of trading away the reigning NFL MVP. However, it seems as if Rodgers may want to play elsewhere when the 2021 season kicks off.

"History is important and legacy of so many people who’ve come before you. But the people – that’s the most important thing," Rodgers told Mayne on Monday night. "The people make an organization. People make a business and sometimes that gets forgotten. You know culture is built brick by brick. The foundation of it by the people. Not by the organization, not by the building, not by the corporation. It’s built by the people.

"I’ve been fortunate enough to play with a number of amazing, amazing people and got to work for amazing people as well. And it’s those people that build the foundation of those entities and I think sometimes we forget that.

Mayne asked Rodgers if he was demanding a trade. But the star quarterback didn’t answer the question. Instead, he expressed his love for Love and for the coaching staff, teammates and fan base.

"Look, with my situation … it’s never been about the draft pick, picking Jordan [Love]. I love Jordan. He’s a great kid. Lotta fun to work together. I love the coaching staff, love my teammates," Rodgers added. "Love the fan base in Green Bay. Incredible 16 years. It’s just kind of about a philosophy. And maybe forgetting that it is about the people that make the thing go. It’s about character. It’s about a culture. It’s about doing things the right way. A lot of this was put in motion last year. The wrench was kind of just thrown into it when I won MVP and played the way I played last year. This is kinda just the spill out of all that.

"But look, it is about the people and that’s the most important thing. Green Bay has always been about the people from Curly Lambeau being owner and founder to the ‘60s with Lombardi with Bart Starr and all those incredible names to the ‘90s teams with coach [Mike] Holmgren and Favrey [Brett Favre] and the Minister of Defense [Reggie White] to the run that we’ve been on. It’s about the people."

The Milwaukee health commissioner said 265 community clinics are scheduled through the rest of the summer, including with the Milwaukee Brewers this week.