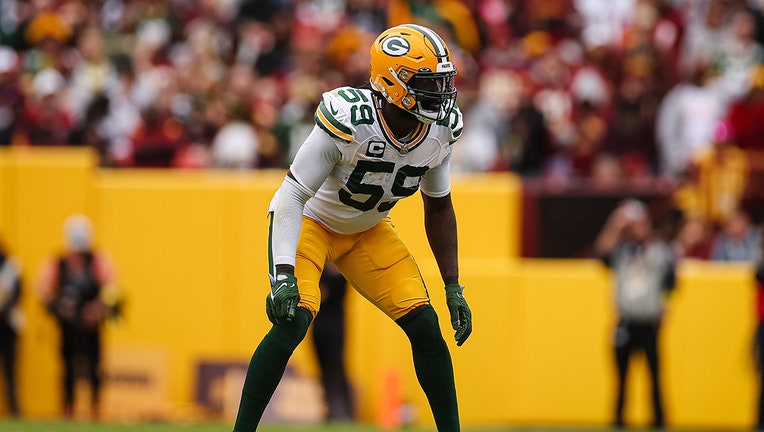 De'Vondre Campbell lines up against the Washington Commanders at FedEx Field on Oct. 23. (Photo by Scott Taetsch/Getty Images)

GREEN BAY, Wis. - All-Pro linebacker De’Vondre Campbell won’t play for the Green Bay Packers on Sunday at Detroit after injuring his right knee in a loss at Buffalo last weekend.

Campbell’s absence means rookie linebacker Quay Walker will be wearing the communication helmet that enables him to relay defensive calls to his teammates.

Defensive coordinator Joe Barry said Thursday that Walker had worn the helmet a handful of days during training camp and for each of Green Bay’s three preseason games since Campbell didn’t play in them.

The first-round pick from Georgia said his accent occasionally has caused some issues when he’s tried to relay the calls.

Walker was ejected from the Bills game after shoving Buffalo practice-squad tight end Zach Davidson on the sideline. Walker apologized after the game.

The Packers (3-5) have lost four straight for the first time since 2016 and will be trying to avoid their first five-game skid since 2008. The Lions (1-6) have lost their last five.