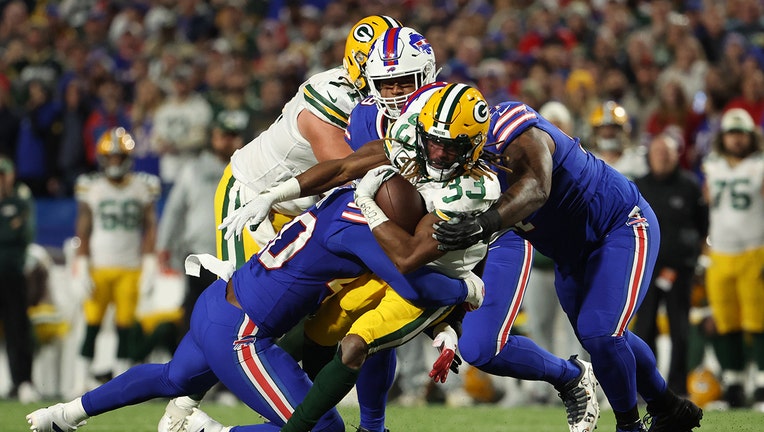 ORCHARD PARK, N.Y. - Stefon Diggs ran his mouth before running past Green Bay’s secondary as he led the Buffalo Bills to a 27-17 win Sunday night over the Packers, who are off to their worst start eight games into a season under Aaron Rodgers.

Diggs began by exchanging words before and after pregame warmups in the tunnel with Packers cornerback Jaire Alexander. He then burned Green Bay with six catches for 108 yards and a 26-yard touchdown.

The only time Diggs was stopped was late in the first half, when the NFL’s concussion spotter pulled him from the game after it appeared he might have sustained a head injury following a 53-yard catch. After being evaluated, Diggs emerged from the blue medical tent and could be seen mouthing to teammates that he bit his tongue.

Otherwise, the AFC-leading Bills (6-1) never trailed in winning their fourth straight and matching their best start to a season since 1993.

Josh Allen finished 13 of 25 for 218 yards and two touchdowns with two interceptions. He added 49 yards rushing, including powerful 20-yard gain on third-and-14 to set up his 1-yard TD pass to Dawson Knox that opened the scoring.

Diggs' TD early in the second quarter made it 14-0, and the Bills led 24-7 at the half. Isaiah McKenzie scored on a 7-yard sweep, and Diggs had a 53-yard catch that set up Tyler Bass' 42-yard field goal as time expired.

Rodgers, the four-time MVP, was unable to will the Packers to victory after he called out teammates, cited too many mental errors and shared the blame following a 23-21 loss at Washington.

The three-time defending NFC North champion Packers dropped to 3-5. The four-game skid is the second-longest under Rodgers and the team's worst since 2016. Green Bay hasn't been 3-5 since 2006, Brett Favre's second-to-last season.

Rodgers finished 19 of 30 for 203 yards with two touchdowns and an interception. He was limited by an injury-depleted group of receivers. Green Bay was already missing veterans Allen Lazard (shoulder) and Randall Cobb (ankle), and then lost Christian Watson to a concussion in the first quarter.

Rookie Romeo Doubs had a 19-yard TD catch in the second quarter, and fellow rookie Samori Toure caught a 37-yard TD pass — the second catch of his career — with 6:32 remaining.

The only thing Rodgers beat was the point spread. Green Bay came in as a 10 1/2-point underdog, according to FanDuel Sportsbook, the most in the quarterback's 15 years as a starter.

Aaron Jones rushed for 143 yards as the Packers leaned on their running game.

Discipline continued being an issue for the Packers after they were penalized a season-high nine times against the Commanders. This time, they were flagged eight times for 58 yards, with linebacker Quay Walker ejected after he tumbled into the Bills' sideline while making a tackle and then got up and shoved Buffalo’s practice squad tight end Zach Davidson in the second quarter.

The loss ended Rodgers' streak of 13 straight wins in prime-time outings, which had been the longest in the NFL since 1970. ... The Packers fell to 0-7 in road games against the Bills. ... Diggs, who spent his first five NFL seasons with the Packers' NFC North rival Minnesota Vikings, became the first player to score a touchdown in eight consecutive games against Green Bay. Randy Moss scored for the Vikings in seven straight meetings with the Packers.

Packers: Watson, who returned after missing two games with a knee injury, was ruled out after sustaining a concussion midway through the first quarter. ... Linebacker De’Vondre Campbell did not return after hurting his knee in the first half. ... LT David Bakhtiari returned after missing one game with a knee injury. WR Christian Watson was also active after being listed as questionable on Friday with a hamstring injury. ... Starting LG Elgton Jenkins (knee) was out and replaced by rookie Zach Tom, who made his second career start after filling in for Bakhtiari last week.

Bills: Bills S Jordan Poyer was ruled out in the fourth quarter with an elbow injury. Buffalo returned mostly healthy following its bye week, with starting right tackle Spencer Brown (ankle) the only starter not able to play.

Packers: Close out three-game road stretch at Detroit next Sunday.

Bills: At the New York Jets next Sunday.