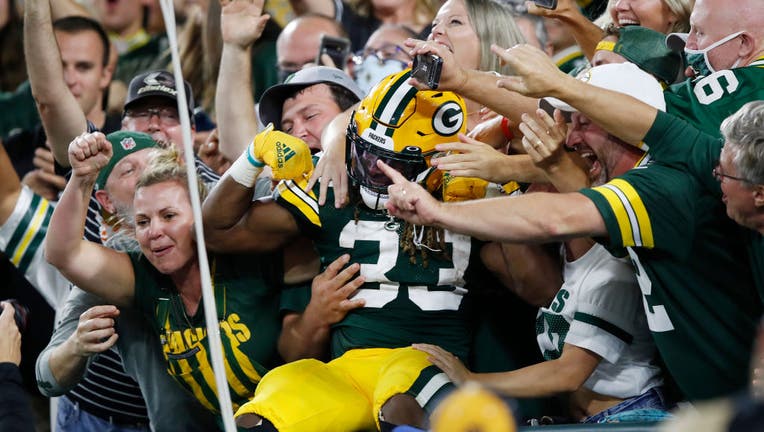 GREEN BAY, WISCONSIN - SEPTEMBER 20: Aaron Jones #33 of the Green Bay Packers does the Lambeau Leap to celebrate a touchdown with fans against the Detroit Lions during the first half at Lambeau Field on September 20, 2021 in Green Bay, Wisconsin. (Ph

GREEN BAY, Wis. - Aaron Jones caught three of Aaron Rodgers’ four touchdown passes and rushed for a fourth score, and the Green Bay Packers had a welcome return to normal after an embarrassing opening-week loss, beating the Detroit Lions 35-17 on Monday night.

Green Bay (1-1) won its ninth straight home opener. The Packers, who got thumped 38-3 by the New Orleans Saints in Week 1, looked more like the team that went 13-3 in each of coach Matt LaFleur's first two seasons.

Rodgers went 22 of 27 for 255 yards and surpassed John Elway for 10th all-time in passing yards with 51,633. Rodgers has followed up each of the Packers’ last five regular-season losses by throwing four touchdown passes and no interceptions in his next game. 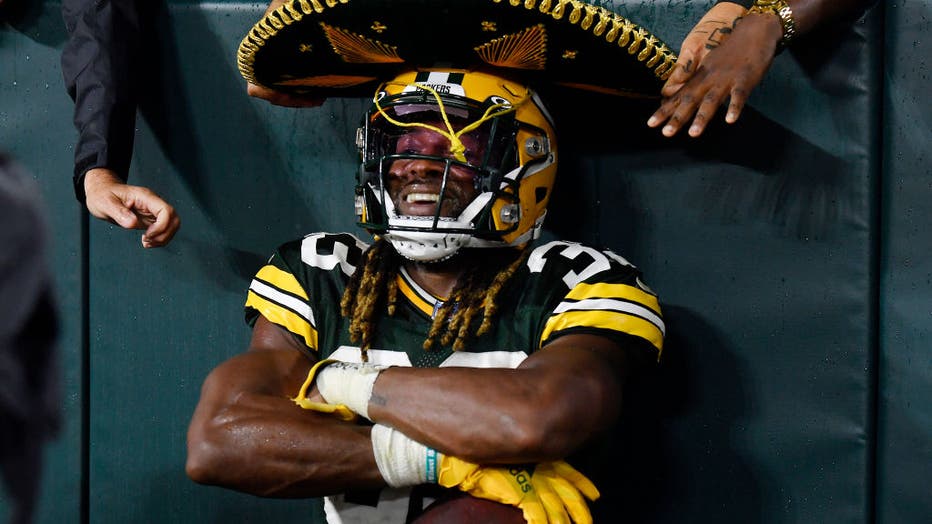 GREEN BAY, WISCONSIN - SEPTEMBER 20: Aaron Jones #33 of the Green Bay Packers wears a sombrero after scoring a touchdown against the Detroit Lions during the second half at Lambeau Field on September 20, 2021 in Green Bay, Wisconsin. (Photo by Quinn

Jones became the first Packers running back to catch three touchdown passes in a game since Andy Uram against the Chicago Cardinals in 1942. He had 17 carries for 67 yards and six catches for 48 yards.

Detroit’s Jared Goff completed 13 of his first 14 passes but struggled the rest of the way as the Lions (0-2) blew a 17-14 halftime lead. Goff finished 26 of 36 for 246 yards. He connected on touchdown passes to Quintez Cephus and T.J. Hockenson but also threw an interception and lost a fumble. 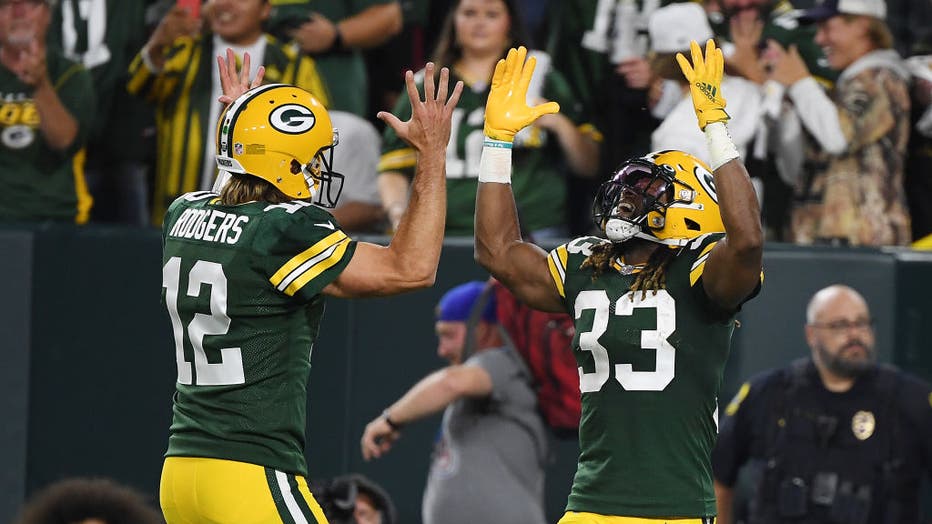 GREEN BAY, WISCONSIN - SEPTEMBER 20: Aaron Jones #33 of the Green Bay Packers celebrates a touchdown against the Detroit Lions with teammate Aaron Rodgers #12 during the first half at Lambeau Field on September 20, 2021 in Green Bay, Wisconsin. (Phot

The Packers faced third-and-12 on their opening series of the second half when Rodgers threw a 50-yard completion to Davante Adams, who ended the night with eight catches for 121 yards.

Green Bay dominated the rest of the way.

As play began Monday night, the Lions won the coin toss and started with the ball. The Lions ended up scoring on that opening drive, courtesy of Quintez Cephus, former Wisconsin Badgers player. That brought the score to 7-0.

The Packers soon answered with a four-yard touchdown run by Aaron Jones to tie the game late in the first quarter.

The Lions' TJ Hockenson caught the ball in the end zone for a Detroit touchdown in the middle of the second quarter, putting the Lions back in the lead 14-7 with under 8 minutes remaining in the first half.

A one-yard touchdown by Aaron Jones, his second of the game, tied the matchup 14 all with under 2 minutes remaining in the first half with Mason Crosby's extra point.

A Lions field goal put Detroit back in the lead just before halftime, 17-14.

The Packers took the lead early in the third with a touchdown catch by Robert Tonyan, bringing the score to 21-17.

Aaron Jones' third touchdown of the game came with just seconds to go in the third quarter, with a pass from Rodgers and run into the end zone, followed by a Lambeau Leap. Mason Crosby's extra point brought the score to 28-17.

It didn't take long for Jones to score his fourth touchdown of the night with a handoff from Aaron Rodgers and a run into the end zone. The extra point extended the Packers' lead to 35-17, the final score.

In Green Bay, FOX6 News found fans pumped for the Packers' home opener at Lambeau Field vs. the Detroit Lions.