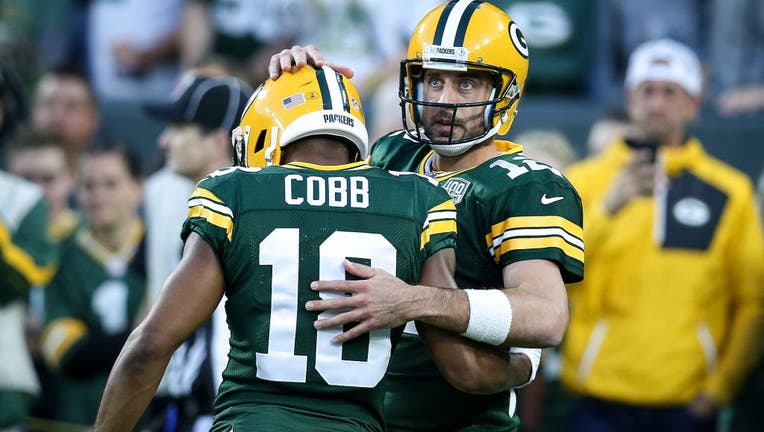 GREEN BAY, WI - SEPTEMBER 09: Randall Cobb #18 and Aaron Rodgers #12 of the Green Bay Packers meet before the game against the Chicago Bears at Lambeau Field on September 9, 2018 in Green Bay, Wisconsin. (Photo by Dylan Buell/Getty Images)

Packers general manager Brian Gutekunst was straightforward Thursday in saying that the team acquired Cobb from the Houston Texans for an undisclosed draft pick because Rodgers wanted him. The Packers have added both Cobb and offensive tackle Dennis Kelly since opening training camp Wednesday.

"Obviously without Aaron, I don’t think we would probably be pursuing that, but he’s still a really good player," Gutekunst said of Cobb. "Seeing him last night just kind of reminded me of what kind of impact he’ll have in our locker room for our football team. This is a very important thing for Aaron, and that’s why we did it."

Gutekunst added that the move probably wouldn’t have been possible "without Aaron adjusting his contract and kicking some money out."

Even as he said this, Gutekunst noted that he isn’t relinquishing control over any personnel decisions. Gutekunst said Rodgers always has been part of those conversations and the difference this year is in how they incorporate his input.

Rodgers joined the Packers for training camp this week after skipping the team's organized team activities and mandatory minicamp. He noted Wednesday he'd like more input in the team's decision-making process.

Cobb, who turns 31 on Aug. 22, played alongside Rodgers for eight seasons in Green Bay and earned Pro Bowl honors in 2014. He caught just 38 passes for 441 yards last year and missed six games with a toe injury.

Kelly, 31, started at right tackle for all 17 of the Tennessee Titans’ games last season but got released in March. Kelly adds depth on the line as the Packers await word whether All-Pro left tackle David Bakhtiari will be ready for the start of the season after tearing his anterior cruciate ligament on Dec. 31.

"We already have a strong locker room, but when you talk about adding Randall and Dennis, that always gets you excited," Packers coach Matt LaFleur said.

Cobb was one of the players Rodgers mentioned Wednesday while criticizing the way the Packers have treated some veterans who "weren’t offered a contract at all or were extremely low-balled or were in my opinion not given the respect on the way out that guys of their status and stature and high character deserved."

Gutekunst addressed that criticism Thursday. He said that "keeping players maybe longer than we should" has a domino effect in that it prevents the team from adding players who could provide a boost.

"Obviously this is a hard business," Gutekunst said. "It’s a tough business. And when it comes to an end for any player, I don’t think it usually goes well. I don’t think you feel very good about it. We are always very sensitive to what those players have given the organization, and when we go through that, it’s always with class and dignity."

Rodgers said Wednesday the Packers wouldn’t make a long-term commitment to him and noted that he didn’t want to become a lame-duck quarterback.

"Obviously, at the moment, he’s got three years left on his contract, so we certainly don’t look at it as a lame duck," Gutekunst told reporters. "We may alter that, but even at that stage, it’s not going to be a one-year contract. Never looked at it like that. As you guys know, in this business, everything’s year to year."

Rodgers isn’t the only Packers star who has issues with the organization right now. Davante Adams is entering the final year of his contract and wants to be the league’s highest-paid receiver.

"I wish that thing was like the NBA, where you get a max contract if you’re that type of guy, and it’s simple," Adams said. "But apparently it’s not as simple as what it should be."

Gutekunst says he wants to sign Adams to a long-term deal.

"It’s how you interpret what the highest receiver in the National Football League is getting paid, you know what I mean?" Gutekunst said. "Certainly, I agree with him that he’s definitely worth that. We believe that, as well. I think there might be just a little bit of difference in what we believe is the highest paid receiver and what he might."

After the Packers opened training camp, reigning MVP Aaron Rodgers present, FOX6 News asked fans what they thought about the quarterback and his relationship with the team.

A Republican state lawmaker plans to block the University of Wisconsin from instituting COVID-19 testing, masking & vaccination protocols on campuses.

2 arrested in deaths of 3 men found at Wisconsin quarry

Sheriff's officials say they have arrested two people in the deaths of three men found slain in a western Wisconsin quarry last week.